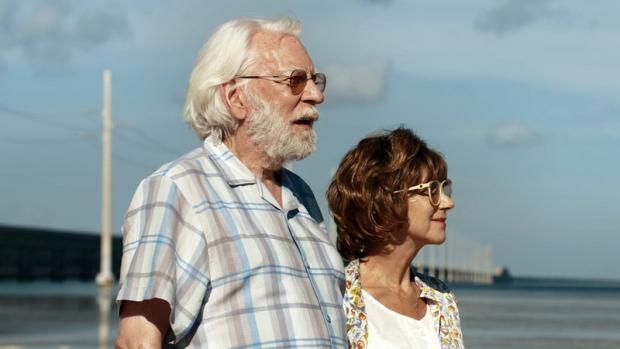 There are two things of note about The Leisure Seeker, not counting the infelicitous title referring to the Winnebago that has long been in the family of John and Ella Spencer (Donald Sutherland and Helen Mirren). One morning, without telling their adult children of their plans, the elderly couple bring it out of the garage and set off on a road trip from their home in Massachusetts to Key West, to visit the home of Ernest Hemingway, a lifelong favorite of John’s. A former professor of English, he is in the grip of Alzheimer’s disease, and is better able to quote Hemingway than to recall the names of his children or grandchildren. Ella, whose own health is fading, realizes that this is the last chance they have to do something on their own.

The first item of note is, obviously, the casting. Almost the entire film consists of Sutherland and Mirren interacting with each other, and they work so well together that I found myself wishing the filmmaker had edited out the few scenes that don’t include them. It’s a particular pleasure to see Sutherland in a leading role, as he’s so seldom ever in his long career been given the opportunity to carry a film. Even in supporting roles, he has too often been the best thing about bad movies.

(Sutherland was honored with an honorary Oscar this year. There was a time was when the broadcast would have included a ten minute tribute to him, in which we would been shown clips from some of his best performances, an introduction from a fellow thespian, and some words from the tributee himself. That fact that the Oscar broadcast can no longer be bothered with anything so backward looking was a large reason why I’ve stopped watching the show.)

The other thing worthy of discussion, alas, is the ending, which the film critic’s code of ethics prevents me from doing. While the movie works as a portrait of a marriage that has been happy, but not without its difficult patches, it will be clear to most viewers that it cannot be heading to any kind of a happy ending. I don’t know if either director Paolo Virzì, novelist Michael Zadoorian, or screenwriter Stephen Amidon (who also wrote Virzì’s international hit Human Capital) intended this story to be a protest of the sad situation of the aging in the Unites States. The film has more than a few scenes set in what John refers to as “human warehouses,” where people who left him are sent to die. You probably wouldn’t argue the decision that sparks the film’s conclusion, but that’s at least partly because it’s dramatically loaded. Such decisions in real life are seldom so clear-cut. If that’s the case, Virzì might have done better to put the conclusion at the beginning of the film and let the rest play in flashback. As it is, it may leave many viewers with a bad taste.

Given the occasional difficulty of finding single films that can attract sufficient crowds for a week, the North Park theater occasionally breaks up its schedule to run several films over the course of a week. Most prominent on the schedule this week is Bombshell, a documentary about the Austrian born actress Hedy Lamarr, by any measure one of the most beautiful women ever to grace the screen. (She was the model for both Disney’s Snow White and for the comic books’ Catwoman.) Signed to a Hollywood contract on the strength of her once-scandalous nude scene in the 1933 film Ecstasy, she was poorly used by Louis B. Mayer, who mostly cast her a sultry beauty in a series of unambitious potboilers. But if her movies may mostly be forgotten, she will be remembered for something that got her little attention in her lifetime. Bored with Hollywood life in the early 1940s and concerned about the war effort, she devised a system that would allow torpedoes to be controlled by radio in a way that was resistant to enemy jamming. That idea went on to be pivotal in the development of WiFi, Bluetooth and cell phones.

If you only have time for one film this week, by all means get to the jaw-dropping The Road Movie, even if it means you have to stay up late for the 9:30 show. This feature compiles footage captured by dashboard cameras in Russian cars. (At a Toronto screening I saw last year, director Dmitrii Kalashnikov said that more than half of cars in post-Soviet countries have such cameras, to provide evidence for insurance claims and as a safeguard against the police.) There are a fair share of collisions, a few of them shocking, though Kalashnikov didn’t use any that involved serious injury or death. Many capture people at their worst. The best capture extremes of weather: roads covered in ice, and a forest fire that is mesmerizing in its intensity. A bear takes a night-time jog; a woman demonstrates why you should never light a cigarette while fueling your car; and we learn what you should do if your tank gets dirty. It’s the greatest movie that Abbas Kiarostomi never got around to making.