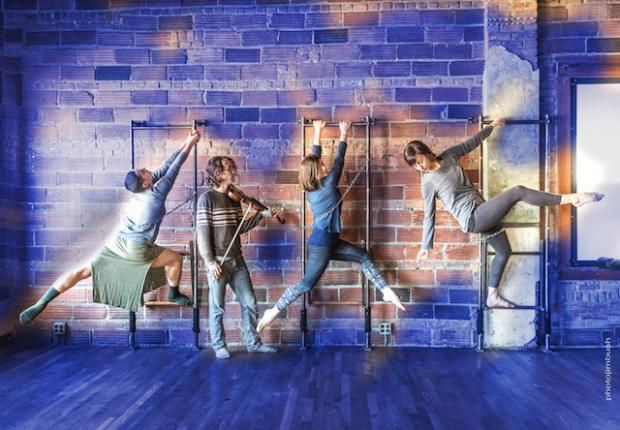 In her performance project, Feedback Loop: Art practices in constraint, artist and dancer Mary Grace Sullivan, a 32-year-old MFA dance student at the University at Buffalo, examines the relationship between the constrained and the unconstrained, as well as the surveilled and the surveillers. What does it mean to be watched? What does it mean to be put into a box or on a stage? Feedback Loop examines these ideas through improvisational interpretive dance that’s influenced by those who are watching it.

A performance of the piece will take place on Friday, April 6 at the Pilates Loft and Brad Wales Architecture at 166 and 164 Allen Street in two parts. In one part, beginning at 8pm, Sullivan’s performers, who include herself, Pilates Loft owner Beth Elkins Wales, performer Angela Lopez, and musician David Adamczyk will be situated in the store front of Brad Wales Architecture for the public to view. In a second part the performers will engage in a choreographed and improvisational instillation in the Pilates Loft. Those who would like to view the Pilates Loft portion of the performance, which begins at 9pm should purchase a ticket ahead of time as seating is limited. There will also be art by multimedia artists Brian Milbrand, Robert Harris, and Jim Bush. This week we spoke with Sullivan about how she conceived of the concept for this show and how she’s using her work to breakdown the idea of choreography itself.

What is Feedback Loop?
It’s a performance and a party. It’s a collaboration between dance artists, live musicians, and a multimedia artist who will be doing projects, like an actual feedback loop in the space at the same time.

What is a feedback loop?
For me it’s multifaceted. Conceptually we’re using the information we see during the performance to inform what we do next. But in media, a feedback loop is a collection of images that spiral into a simultaneous still frame created by camera projections. It’s not very complex to do but it definitely is a very interesting visual to play with. The performance is base on improvisational structures of themes. The ideas of constraint come in because we’re using contained spaces and we’re suspended from the ceiling in certain areas or chained to the wall as part of the performance.

It’s also inspired by the concept of surveillance.
Yes. We notice as the performers, throughout the feedback loop, how we are being captured in space and time during the performance. What furthers the idea of the performance being immersive is that the audience is not just sitting and watching a concert dance. They are actually in the space with us, so that they are captured too and they will encounter themselves being projected and watched. That’s where the ideas of surveillance come in. You’re not safe from the videos. You’re not safe from being watched.

How do the concepts of surveillance and constraint relate for you?
It goes back to who has the privilege of watching and then being watched.

And the performers are actually physically constrained.
In the downstairs portion, in the window, the space itself is constraining. Our movement vocabulary will find limitations. Someone will be suspended, their limbs will actually be harnessed from the ceiling, trying to do the movements while being constrained. Upstairs, when we’re in the loft, we’re using similar ideas—there are harnesses hanging from the ceiling which we can suspend from and there are chains coming from the walls that we use within the dancing.

Does the performance have a specific beginning, middle, and end or is it more like an instillation which can be walked up to at any time?
For the first hour, from 8pm to 9pm, anyone can experience it at any point. If you want to go upstairs and see the rest of the show, you do buy a ticket. I’ll be honest, it’s a fundraiser for me and my thesis work. I’m getting my MSA in dance. My research is in undoing the boundaries of choreography—what we think choreography is.

How do you think this piece applies to the concept of undoing the boundaries of choreography?
This piece is using the themes of constraint as practices of freedom, quote unquote, in the arts. Sometimes we view art practices as meaning community, but in fact a lot of time it’s happening under a lot of constraints. My ideas of choreography stem back to creating a score. The score is a map that you can go back to to know what you do in time and space, and then you have scenes of music. Or, for David [Adamczyk] playing, he has his themes on the violin. We all have our ideas to come back to, yet what we do in time and space is intuitive with each other and it’s all based on a theme. And to me that’s choreography. I don’t need to repeat the same thing in the same time and space.

What was the seed that planted this idea in your mind?
I wanted to not do a concert dance. I think that to undo the ideas of art community, I want to create art that is immersive—where people who are performing as well as people who are watching are all participants. Everyone is valuable in the process of the actual performance.

How did you decide on the space for this performance?
I’m a pilates instructor in training with Beth Elkins. I love the space; I think it’s beautiful and intimate. The Brad Wales Architecture gallery can also be viewed as a public space, so that the performance doesn’t just exist in this small inclusive area, but is available to anyone on the street.