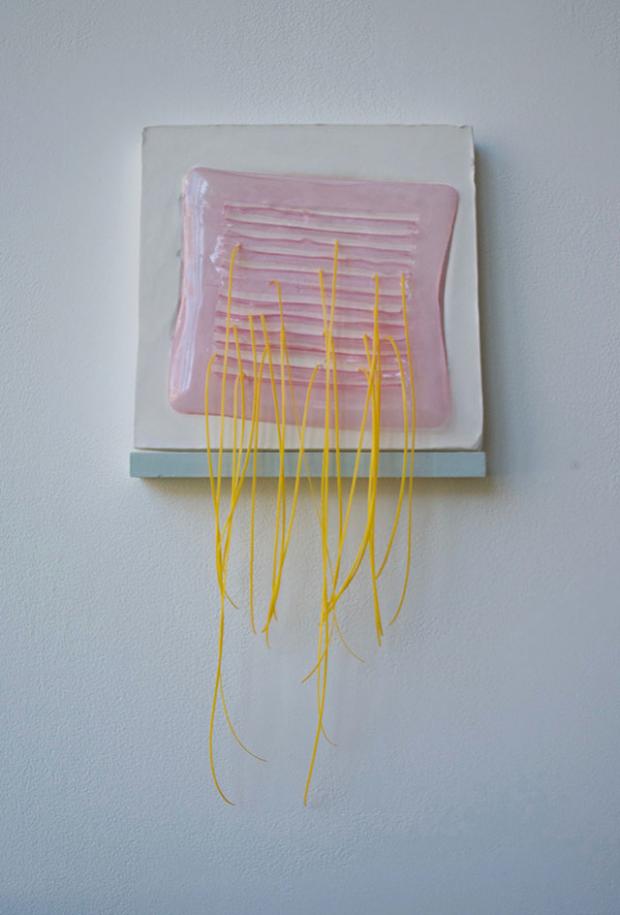 Work by Rebecca Wing at the BOX Gallery

Rebecca Wing’s exhibition at the BOX Gallery, which she calls Soft Things Rigidly, is an unassuming body of work. Each piece means everything and nothing. It’s ambiguous that way, much like the show’s title. She isn’t trying to tell us a story or make a statement, though all of her sculptures do exactly what they are supposed to do: They play with us, they are static yet suggest movement, and allure us.

When I sat down with Wing to talk about her work, I found that I was trying hard—too hard—to understand it. I had a list of the usual questions: What inspired this piece? What do you want the viewer to know? What inspires you? What is this piece about? It wasn’t until halfway through our conversation that I realized I needed to be quiet and really let her talk. Most of these pieces are conceived of as “lids” to Wing—I’ll get back to this later. Many of her nine sculptures in the BOX Gallery, inside the Hostel Buffalo Niagara downtown, are displayed precariously: one hung low to the floor-corners protected by bubble wrap, a few of them leaned up against the wall on way-too-small shelves, balanced on a small wooden stilt or leg, one wrapped in a green tarp. Yet they’re all stable, strong and sure. Each work is elegant, intangible, temperamental and playful.

The material is the same in all the pieces. Wing describes it as a low-brow papier-mâché recipe of white glue, plaster, toilet paper, and joint compound. It goes on soft and turns rigid, appearing like ceramic at the end. It’s craft material but her sculptures are not crafty. She imposes strict rules on this material. In most cases an armature is created of cardboard and the papier-mâché is carefully spread across it. Color doesn’t come first; copy paper white dominates. In some pieces, color only goes where shadows go, making the colors barely perceptible. The color she does use brings some levity to these austere forms.

Her work is subtle and needs to do nothing more than take up space. It is imbued with humor though she isn’t trying to play with us. She knows when enough is enough.

Betty Spaghetty is a wall-hanging sculpture that leans on a small shelf. It’s essentially a hunk of plaster with a piece of pink thermoplastic that looks like a heater vent set on it. From between the vent slits hang strips of yellow boondoggle set in the plaster. The plastic in this piece is a strong contrast to the plaster-colored form.

Wing described many of the pieces in the show as lids. As I understand it, she finds sculptural forms and composition material all around us. She regards forklift arms, army tank tires, steamrollers, excavators, and dumpster lids with a childlike enthusiasm. Lids, an ironing-board-shaped form propped up by a wooden leg, is reminiscent of a dumpster lid. Next to this is another, similar form—its underside painted a perfect grey to imply a shadow—leaning against another long-board-shaped form, one side with a perfectly placed piece of pink packing material across it. The relationship between these two related forms leaves one searching for its purpose. What does this do?

Another piece called Tetch made me nervous. It looked like it might move, fall, or plop down at any minute. It is a white, deflated spherical form with a hole in it that glows green set on top of a long dowel rod form with more yellow boondoggle strips set on the bottom. This sculpture is literally laughing at you. One wants to look in the green glowing hole and stroke the plastic strips at the bottom but you can’t. You are afraid even to breathe near it. Experiencing this handsome piece that hangs, hovers, and leans induces internal laughter.

The show’s biggest piece and easiest to spot walking by on Main Street, Loll, laughs at you too. It’s a large box with a green tarp over it secured with yellow rope and some white twine. Wing alludes to a construction site by placing fence-like posts in front of it with a string of yellow triangles. Set on top is an elegant scroll-like form that rests on top of the tarp-wrapped sculpture. The scroll is doing what it is supposed to do, curling and unraveling.

To Wing herself, the process is simple. “I see sculptures in the world and then I want to make them,” she told me. Some things move in certain way and take up certain spaces for a reason—a forklift, for example, is made to do a job. “Why does it have to look this way to do what they need it to do?”

Wing’s sculptures have a more elusive purpose, even as they long for utility. Wing finds her rhythm here. Soft Things Rigidly continues through April 24.  The Gallery Hours are daily from 5-10pm.