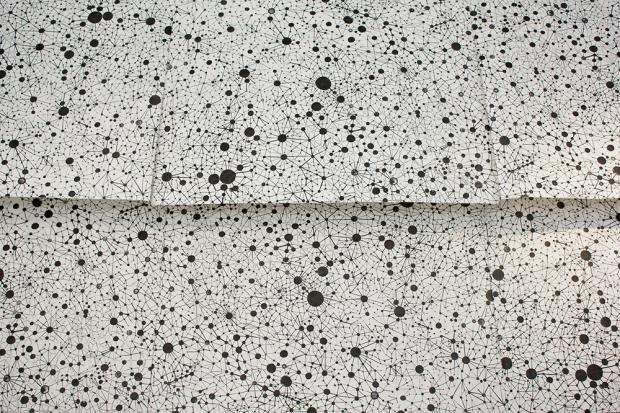 A week or so ago, in a story on the radio on the tariffs Trump was announcing on steel and aluminum imports from most of the rest of the world, the reporter interviewed an Iowa pig farmer. The farmer explained what a bind the tariffs put him and other pig farmers in, given that China in particular was certain to retaliate with tariffs on a laundry list of American products, including pork. How the loss of the China market for Iowa pork meant having to load more pork product on other markets—such as the American domestic market—that already had more than adequate pork supply. Causing pork prices to drop, reducing pig farmers’ revenues, and ultimately pork production, and so corn and soybean production—corn and soybeans being main ingredients in pig feed—and farm equipment—tractors and trucks—sales and manufacturing, and so forth and so on.

In other words, everything’s connected. Which is the main message of Mizin Shin’s artwork currently on show at Buffalo Arts Studio. Except illustrated with cows and chickens instead of pigs. One of her large wall installation works consisting of multiple little icons of cows and chickens, among icons of farm crops—corn and soybeans again certainly, main ingredients also of cattle and chicken feeds—and farm equipment and facilities used to harvest and store feed and other crops—tractors and combines and corn cribs—and process equipment used to process food product and get it to urban markets.

And the further message, that if everything’s connected, the system becomes a feedback loop, which occurs when system outputs are routed back in as inputs, for ultimate increased effectiveness of the system, for good or ill. Feedback loop is harder to see in a static work of art—even about dynamic processes—but seems more implicit. What Shin’s various works show explicitly are networks, in a range from concrete—the cows and chickens and farm production work—to abstract. Several large and small dots and interconnecting lines works—like a Jackson Pollock if he took the next step and with a pen or pencil joined his dots—including a wall-hanging sheet work—or actually just off the wall, about six inches from the wall—with black dots and perforation dots and lines, part of the aesthetic effect of which is the shadow subdued reiteration of the sheet pattern on the wall behind it.

While in a second gallery, some cave paintings by an artist better known for his fine portraits, Chuck Tingley. Two heavy canvas construction cavern spaces and tunnel passageways in and out, the walls and floors and ceilings painted in a riotous variety of images and styles and techniques, juxtaposed and overlaid and occasionally intermixed with some often scarcely legible verbal content, meandering meditations on art and life. Thoughts about middle and high school and social groups and interactions, and the sometimes futile project of “trying to fit in.” And moment of realization that fitting in is not the essential thing, but something more essential and interesting might be achievable through sedulous practice of one’s art. “Get into a zone, and paint for hours,” and “paint every day.” The caves project seems an impromptu—and uncharacteristic for this artist—outcome along the way. (For some more characteristic work, check out his contributions to the Freedom Wall public art project a mile or so down Main Street from Buffalo Arts Studio and one block east, the corner of Michigan and Ferry. Portraits of hero and heroine African-Americans Stokely Carmichael, Angela Davis, George K. Arthur, Huey Newton, Mary B. Talbert, Dr. Monroe Fordham, and Minnie Gillette.)

Among the caverns phantasmagoria of images and words: Super Mario, zodiac signs, a monster dragon, soldiers, dense jungle greenery, some Lockport references, including a Millersport Highway sign, a pair of white deer, a woman in a tub, a mother and baby, two dowager ladies in blue dresses and black shoes on a pink couch, outline portraits sketches, electronics apparatus, a man on a ladder climbing up to a ceiling trap door, apparently about to enter, and the words nearby, “who/what will save me now?” And scattered words and phrases: “fear” and “struggle” and “anxiety” and “nothing left to say.”

The Mizin Shin and Chuck Tingley exhibits continue through May 5.