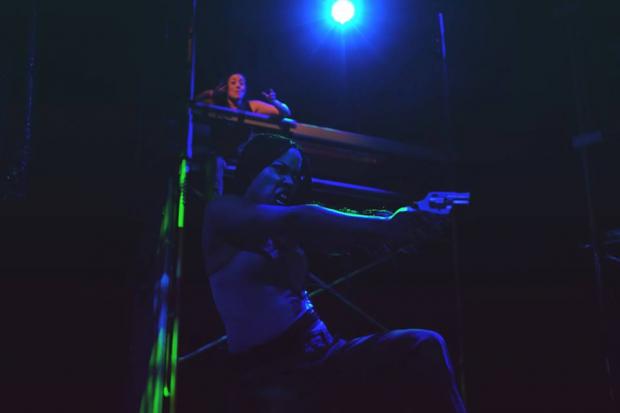 Plot—in a play—is a good thing. There are plays that have done without one, but not many. Or not many that anyone remembers.

But then there are problems with the plot. A simple enough storyline, about the small matter of saving the world. With a glance toward what happens afterward, after you save the world. Plot devices include not just one but dual apocalypses. (A word that doesn’t often occur in the plural. Usually one apocalypse is enough. But if the plot requires two, you go for it.)

The saviors are four unlikely characters thrown together in Evangola, New York, of all places, after the first apocalypse has reduced the total population of the United States to 919. Somehow there still is a United States, but it’s unclear just what it consists of and who’s running it.

The play is a work in progress. Or should still be so regarded. Following the performance, the playwright, Jon Elston, and some of the actors did a talkback session with the audience about the play: writing it, producing it, rewriting. They talked about how pretty much throughout the rehearsal period, wholesale script changes happened daily. Didn’t stop until about a week or so before opening performance. They stopped too soon.

In response to a question from the audience, the playwright got to talking about the evolution of some of the characters. And one character in particular (not one of the four savior types but a fifth main character, or maybe dual character, flitting between Orwellian Big Brother figure and malicious prairie libertarian nuts Tinker Bell figure.) Elston talked about how several former characters were eliminated as he gradually realized during production that they didn’t really have a distinct function in the play, or that their functions could better be subsumed by or within other characters. Someone from the audience asked about the function in the play of the Big Brother/Tinker Bell character(s). No one—playwright or actors—seemed to know for sure.

Another plot problem, in a word: zombies. A good rule regarding plays and zombies, if you want to say something serious in a play, something that means something, which this play seems to be trying to offer: no zombies. For pure horror movies, fine. The more zombies the better. But for just about any other kind of literary or performance endeavor, no zombies required. Zombies, keep away.

The main actors (Lisa Vitrano, Danica Riddick, Peter Palmisano, and Steve Brachmann) all do a good job, when they are not groping. The fifth actress (Kelsey Mogensen), too, even when her actual function in one character or another is hard to put a finger on; as the Big Brother character she is appropriately impersonal imperious, as the prairie libertarian suitably bizarro.

Right-wing libertarian strain takes a lot of hits here (not that it doesn’t deserve them). The one obnoxious savior character is a one-percenter by the name of Foch (rhymes with Koch, in addition to any other aural resonance that may occur). But the hits would land more solidly if they had a more credible structure and storyline and characters to land on.

Scott Behrend and Katie Mallinson co-directed. The production continues Thursday through Saturday (April 2 through April 4) at 7:30pm at the Road Less Traveled Theater, in the Market Arcade Film and Arts Center.