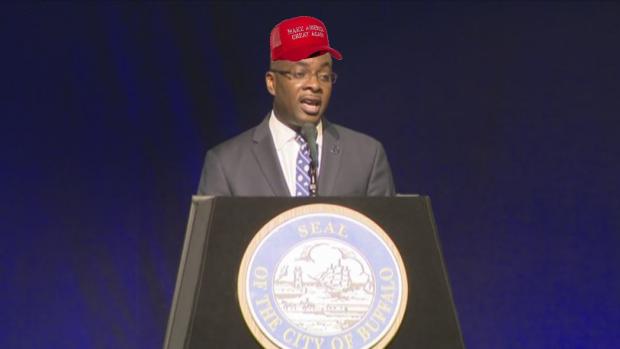 Stealing a page from Donald J. Trump, Millionaire, Mayor Byron Brown today proclaimed it “Fake News Day” in Buffalo. Given the timing, coming on the heels of a dust-up with the Buffalo News over their coverage of the CAO, the proclamation seemed to be a barely veiled jab at the hometown paper.

Last week, Brown dismissed the News’ coverage of these dismissals, non-dismissals, and re-missals as “fake news.”

According to a tweet by WIVB Investigative Reporter Dan Telvock, when News 4 reporters asked Brown about the Buffalo News CAO coverage after last week’s State of the County speech by County Executive Mark Poloncarz at the Albright-Knox Art Gallery, Brown replied, “From my perspective, the Buffalo News reporting on this has been biased, unethical, and incredibly misleading.” Telvock added, “When asked for specifics, he then called it ‘Fake News’ and walked away.” Although Telvock was not present, he said that he saw the interaction afterward on WIVB video. (That video hasn’t been made public, although many have called for it to be released.) A similar comment from Brown appeared in last week’s Buffalo News, in which he characterized their coverage of the CAO situation as, “For lack of a better term, just completely fake news.”

Mayor Brown’s taking of a page from Donald Trump’s media-bashing playbook caught many by surprise, given his standing as one of New York State’s most prominent Democrats—until recently, the chair of the state party. But less so long-time Brown observers, who noted his long-time coziness with local Conservatives. Some observed that his administration seems to be less cozy with County Executive Mark Poloncarz, a fellow Democrat, than it was with his predecessor Chris Collins, a rabidly right-wing Republican who was the first member of congress to endorse Trump for president. Others pointed to the central role the Brothers Comerford—Dave and Jim—have played in the Brown administration despite that they are among the closest friends and political allies of Carl Paladino, a rabid (apparently) Trump supporter who was co-chair of Trump’s New York State presidential campaign. Others noted the way the Brown administration seems to grease the skids for projects by the development firm of which Paladino serves as chairman.

An executive at One News Plaza, speaking on condition of anonymity, characterized Brown’s proclamation of fake news as, “For lack of a better term, just completely nuts.”