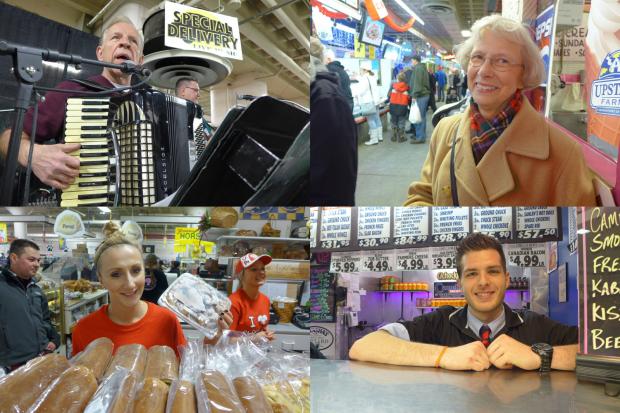 At the intersection of Broadway and Fillmore Avenue, Polish flags, high up on lampposts, flap in the wind. The Broadway Market, an East Side food trade landmark located at 999 Broadway since the late 19th century, began as a neighborhood open-air market—precursor to today’s farmers’ markets. My Polish grandmother’s childhood experiences there included a stop for freshly butchered chickens at one of the many stalls.

The Market, a concrete bunker of a building (or brutalist, depending on your perspective) since the 1950s, remains a place to experience ultra-social, unpretentious grocery shopping year-round. For many neighborhood seniors, it’s their daily gathering place.

Easter Week is the bulk of annual foot traffic there and those who’ve moved away from the neighborhood, and fans of the pre-Easter frenzy trek back for jostling and traditional wares, joining the regulars. The two days before Easter, the Market opens two hours early, at 6am. I have photographed the people who crowd the doors pre-dawn and rush the merchants on Good Friday: sausages, butter lambs, and potted plants fly from the shelves.

On Saturday, March 28, I went shopping for a few Easter favorites as well as stories of those who help make the Market swing. Families waited in a long line for photos with the stoic Easter bunny, people took numbers and waited for their turn at butcher counters, and some danced as the polka band Special Delivery played. There were raucous shouts for an encore when they finished their set.

Ted Szymanski, a member of Special Delivery, knows the exact date that he took up the instrument: “February 1st, 1957. I was seven years old. I wrote the date into my first lesson book.” He’s been playing accordion for “at least 50 years,” learning from his father, who played while he was in the service at USO facilities in the Pacific.

Special Delivery has played two Easter seasons in a row at the Market and they’re booked solid for Easter and Dyngus Day—the day that everyone in Buffalo is Polish. Ted owns a dozen accordions, and has written three Bills-themed polkas.

“When they call 80 I have to jump because I don’t want to miss my number,” says shopper Barbara Wier, in line at Lupas Meats. Holding a clear plastic bag filled with a traditional cross bread, she’s getting sausage. On her list is “a butter lamb, just one, horseradish, beet horseradish, and almond bars at the bakery.”

She grew up nearby in Kaisertown, on South Ogden Street. “When I got married I moved to Tonawanda, and then we moved back to Buffalo, and then we moved to Cheektowaga. I come to the market at Christmastime and one in a while, and Easter. When I was little we came often. I come for the memories, lots of memories of my family.”

Adam Cichocki, one of those running behind the counter of Camellia Meats, is a fourth-generation retail manager of this family-owned business. In addition to meat products there are six sizes of butter lambs available: tw0-, four0, six-, and 10-ounce formations, and three-pounders—”straight face,” or “head-turned.” “We’ll sell over 100,000 butter lambs this year,” Adam says.

Camellia owns the intellectual property of Dorothy Malczewski, the originator of the butter lamb. “Dorothy started all the butter lambs, they’re called ‘Malczewski Lambs,’ and they’re made on Genesee Street.” When asked how many hours he’ll put in this week he says “I’ll probably work the next eight days times…probably 120 hours.”

“My parents moved to the US with $100 and two suitcases in 1986, and they took on this little retail operation,” says Ania Gurnari of her parents Hania and Teddy Robieniek. Ania is the face of Chrusciki Bakery that began in the Market and now has locations in Lancaster and in Kenmore.

“I eat a lot of pastries, we are always tasting, and that’s why I work out a lot. Baked goods in moderation is all right, and everyone needs a little treat once in a while.”

And how do her and her parents celebrate Easter? “We tell crazy stories, about some of the customers and their requests, all the waving arms. Everyone wants you at the same time. I see so many people who I haven’t seen since last year.”