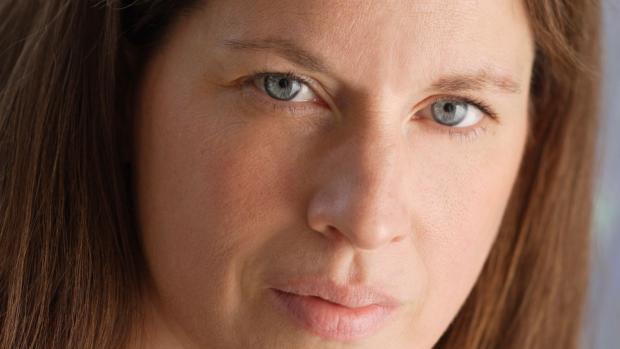 Playwright, journalist, crossword puzzle constructor, children’s author, blogger, and Western New York representative for the Dramatists Guild, Donna Hoke has become ubiquitous on the Buffalo theater scene. With plays like Seeds, The Couple Next Door, and Safe, she examines the anxieties of modern living with palpable apprehension about the future, and in that regard, would seem to be the quintessential Buffalo playwright—but with far more foreboding than A. R. Gurney and far less innocent merriment than Tom Dudzick. She is an ensemble playwright at Road Less Traveled Productions, where Seeds,—about twin sisters, one of whom has fertility issues—premiered in 2013 and won the Artie Award for Outstanding New Play. Safe won the Todd McNerney and Naatak National Playwriting Contests and is currently a finalist in the Great Gay Play and Musical Contest; it will debut in 2016. In addition to productions in 27 states and on five continents, locally Hoke’s work has been staged at Subversive, Alt, Road Less Traveled, Alleyway, and Buffalo United Artists, where she is founding co-curator of BUA Takes Ten: GLBT Short Stories.

BUA Takes Ten, a festival of short plays on GLBT issues, is currently running and Hoke’s offering is a six-minute attraction called “Best Interests.” In the play, a mother and a son are able to come to better terms with their relationship when they find that they are both attracted to the same waiter.

At the same time, and in the same theater complex, Hoke has another short work featured in Alleyway’s Buffalo Quickies. In “You Haven’t Changed A Bit,” Lottie has never been to a high school reunion, while Len has been to them all. “Their 70th is a first for them both.”

What word would your friends use to describe you?
A lot of them say “strong,” and I always secretly hope they don’t really mean “bitch.”

What character in your current play is most unlike your own personality?
The waiter in “Best Interests”—I’ve been told I don’t know how to flirt.

What character in your current play is most like your own personality?
I didn’t realize until this question that the other four characters in these two plays all represent some facet of my personality, which I guess isn’t surprising.

When and where were you the happiest?
March 26, 1995, the day my daughters were born and October 9, 2000, the day my sons were born. Sorry, there’s got to be at least one cliché answer.

What is your idea of hell on earth?
Most recently, being stuck without earbuds behind a loud, drivel-spewing biddy on a four-hour-plus flight from Phoenix. Convocations are a close second.

What is your greatest fear?
Outliving any of my children. I tear up just typing that.

Which talent do you most wish you had?
It would be helpful to be charming and schmoozy and be able to speak intelligently on any topic.

What superpower do you most wish you had?
Bonking, by which I mean the ability to get from one place to another instantly. Some might call that teleporting, but my kids and I have called it bonking every time we wished we had the power—which is often.

What would you change about your appearance?
I’d say my teeth, but I guess if I really wanted to do that, I would have done it. I wouldn’t mind having my pre-C section abs back, but they were a small price to pay.

What trait do you most dislike in others?
Unreliability.

What do you most value in your friends?
Depends on the friend — I value different things in each of them.

What quality do you most value in a good director?
The desire that the playwright s/he’s producing be alive.

What is your guilty pleasure?
Survivor. Since the beginning, it’s been a family tradition to have tacos and brownies on Survivor night—16 years! Good thing we centered a tradition on a show with such longevity!

Who is your favorite fictional hero?
I haven’t had one since Nancy Drew.

Who is your real-life hero?
Hero is a little strong, but I’ve always admired Bruce Springsteen for chasing his dream against daunting odds, working his ass off, and standing up for the less fortunate and what he believes.

What do you consider to be the most overrated virtue?
Height.

On what occasion do you lie?
I tend not to lie — and I’m sure there are times people wish I would! —but I do sometimes carefully select the truths I share.

What was the subject of your last Google search?
“Is my toe broken?”

If you come back in another life, what person or thing would you like to be?
A fly on the wall.

What is your motto?
I’m stealing this one from my daughter: “Never give up on a dream because of the time it will take to accomplish it. The time will pass anyway.”