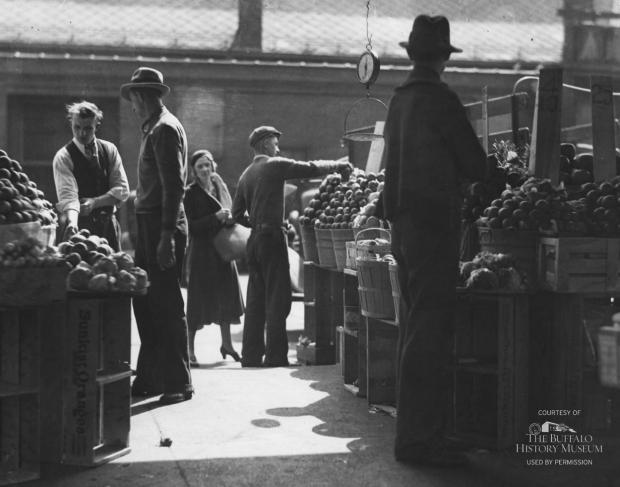 “No, the market is not a quiet place. In fact, it’s noisier than a newspaper editorial room. Or a boiler shop. Oceans of foodstuffs and a babel of tongues. Laughter. Shouting. And invitations to buy.” —Buffalo Times, October 4, 1931

The Broadway Market, 999 Broadway, shown here sometime in the 1930s, was the largest and busiest of the five public markets operated by the City of Buffalo. This photograph, taken with a Graflex camera by Buffalo Courier Express photographer Wilbur H. Porterfield, depicts farmers on the outer fringe of the market, foodstuffs propped up on crates.

The original market building, built in 1890 and replaced in 1956, is in the background. The Broadway Market had space for some 100 permanent and 200 temporary stalls. Arthur Bennett, marketmaster at the Broadway Market, reported that some Saturdays found 50,000 patrons crowding the aisles and open spaces. This Easter weekend, perhaps a similar number will descend on the market for kielbasa, chrusciki, and butter lambs.