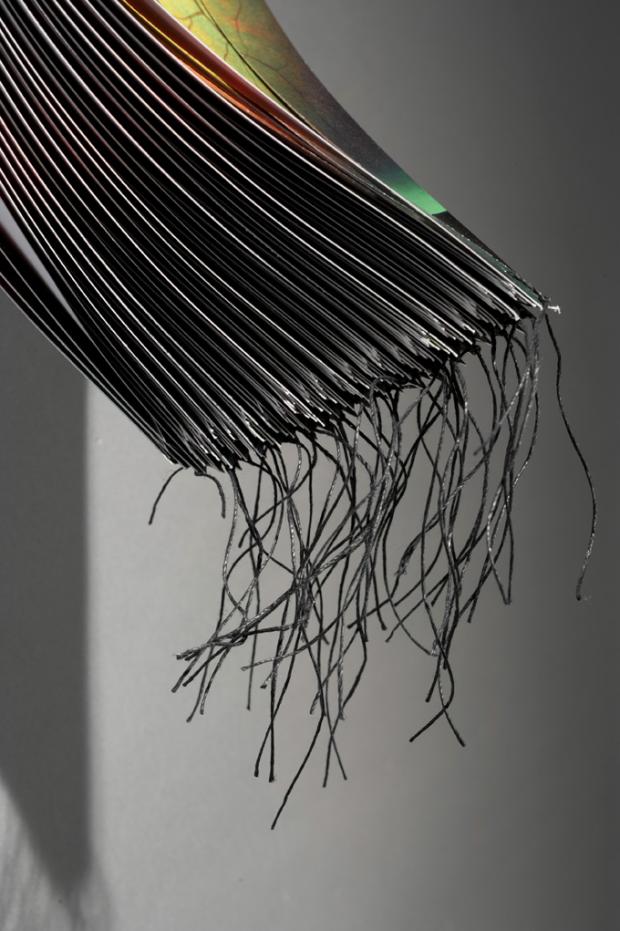 Among sculptors, basically, there are carvers and there are constructors. With artist Jozef Bajus, it’s not that simple. Basically, he’s a constructor. He builds forms rather than cuts away to discover and reveal them. But he also often deconstructs as an initial step prior to construction. And sometimes the deconstruction looks a lot like cutting away to discover and reveal. As in his various book works—taking old books and cutting and folding covers and pages in a painstaking process to make sculptural art objects of them. Or cutting or tearing paper sheets and reforming the fragmentary or otherwise disintegral remnants—sometimes by layering, sometimes by sewing or stapling them—into works that hover between sculptures and paintings, three-dimensional and two-dimensional.

For the reformed paper works, maybe a better term than construction would be fabrication, in the literal sense of making fabric. Fabrication in a more general sense seems to work best for some thoroughly three-dimensional pieces in wire and wood and plastic tubing and the like. Or, unlike, felt. Examples of all these types are on display in the artist’s current exhibit at the Manuel Barreto Gallery, on Delaware Avenue near Virginia.

Including a spectacular construction/fabrication of hundreds of lengths of serious-gauge copper wire, kinked and strung on a cable across the long front window of the gallery and topped—each length of copper wire—with a contrastive short length of grey felt. Like some huge iridescent jewelry piece—a bracelet or necklace—strung out long for display. A piece that hovers between mobile and stabile.

Another work consists of hanging bundles of heavy-gauge wires, kinked again, and tied or linked horizontally across about mid-length with clear plastic tubing. (Another piece that was to be installed several weeks into the exhibit—a literal centerpiece, hanging in the center of the room—consists of two large wood panels pierced with numerous holes through which a single length of plastic tubing is threaded, loosely linking the separate panels. This piece is entitled alternately Big Bundle or My Life after 40.)

Some more painterly items include several torn colored paper works wherein the fragments are rejoined with rows of staples into the reconstituted form of the (supposed) original paper sheet. Like maps of lands with many subdivisions, all of the same color but glittering formal borders.

Layered works with cutouts often in elongated mandorla forms—boat forms—occur in various combinations of black-on-white and white-on-black, with occasional spectrum colors thrown in as if by chance. One white-on-white work and one black-on-black feature differently oriented cutouts—horizontal versus vertical—in their different layers. The central feature in a multi-layered torn paper piece in an overall boat prow form is a kind of crater dig into human or animal flesh imagery, vein-patterned and in lurid colors—reds, yellows, greens.

Among smaller works on shelves are some meticulously folded paper items—they look a little like Rubik’s cubes, but more complicated, harder to figure out how they’re put together—and prototype small-scale models for large-scale sculptures of the basic type with two planar items linked together with plastic tubing, but differently configured planar pieces, and different connection materials, artificial and organic. Wire, twine, tree branches. With sometimes the connection materials—wire or whatever—strung with frill ornamentation fabric.

And most intriguing, dual models for a sculptural work featuring a pyramid form largely enclosed within a rectangular box that opens to better reveal the pyramid form. Essentially a (sculptural) construction exploring and illustrating the essence of (sculptural) carving.

Much of this work has an experimental look. Much by way of variations on a theme. Try this way; try that.

“Nothing is new; everything has already been done,” the artist says in a statement that seems about to affirm futility. But goes on to say how experiment can lead to something new, something that hasn’t been done. Often by chance. “Experiment and chance fascinate me,” he says. “Chance is almost always connected with some surprise element, and many times becomes the animating spirit in solving an artistic problem.”

The Jozef Bajus exhibit continues through May 15.