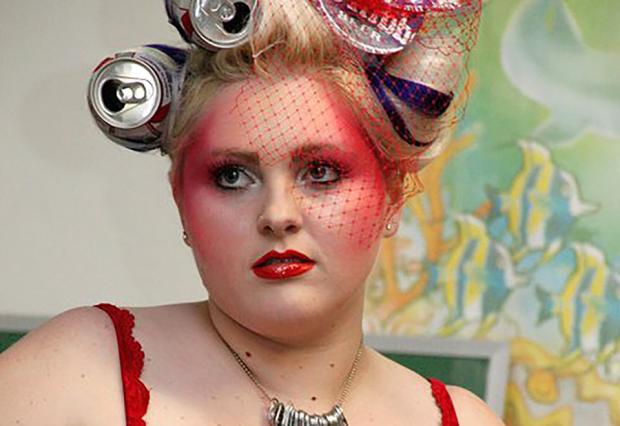 As soon as  we get a sunny day, not even 50 degrees, we switch right from winter coats, boots, and scarves to shorts, tanks, and flip flops. Bring on summer! Different seasons allow us to change up our looks.

Fashion is as unpredictable as the weather. (I hate when I decide to dress light on a nice day and ride the trike to work in the sun and ride home in a snowstorm.) It is also diverse: Cultural additions to our local scene are brilliant, people being true to themselves. On my ride down Grant Street to work, I witness a beautiful array of flowing colors and patterns. It’s not about appropriation here, but about people celebrating their own beautiful cultures proudly and feeling safe to do so.

My roommate Max Darling is the most fabulous person in Buffalo. He defies gender and literally wears rags—ripped pantyhose as shirts, layered with a slutty floral summer dress, pleather leggings, and the best 1990s platform shoes you have ever seen. His outfits cost nothing but look designer. Poor is in, dirt couture. We don’t have money for tags, so we have to be creative. People always ask him what he’s wearing; his response is to smile and keep strutting by in slow motion with an air of mystery. Max stands out amongst a bleak yoga pants and Ugg Boots with puffy vests over Sabres or Buff State hoodies, and messy buns.

My winter and summer wardrobes are the same with layers added. I gave up on pants a long time ago; lush, vintage-inspired party dresses are it for me. My favorite places to shop are Cats Like Us in North Tonawanda, Miss Josie’s Antiques in Kenmore, Froggy in Elmwood Village, Second Chic, Amvets, Good Will, Savers, and clothing exchanges with friends. My costumes and everyday clothing merged a long time ago; life is a stage,  and it’s fun to play dress-up. I adore mixing the old school pinup with eclectic modern fashion and a dash of art punk.

We do not wear what New York City wears. Last time I was there I noticed mostly black—very boring, high-class, functional. I went to a trendy hipster bar in Brooklyn and owned that place within five minutes because I was unique. People love realness, and you can’t teach or fake it. I wore a totally gross cut-up striped man sweater and got so many compliments. It was authentic; nobody could buy the exact same one. DIY, roughly altered garments, patches, and buttons of things you are passionate about added, worn in fashion chaos. All of the patterns, but they still have to make sense, like all in the same hue, or complementing, combining crazy cat lady with high school art teacher and 1940s glamor. I feel like an eight-year-old dressing herself. I ride around on my pink-painted adult tricycle (with streamers and a cheeseburger bell) and don’t care what the general population makes of me.

I love repurposed, up-cycled fashion. I’ve been part of several wearable art fashion shows that used recycled goods as materials. The PBR can dress by Lulu Robinson and I for the Mass Appeal show several years ago was a smashing success. I wanted so badly to walk down to the end of the runway and chug a beer, then crush it on my head. (I bet no model has ever done that!) I also wore a dress made entirely out of pizza crusts and boxes with Melissa Campbell; we called it Upper Crust Punk. I ate a slice of pizza at the end of that runway.

Being plus-size has always been a roadblock in the fashion world—until now. There is a Plus Size Fashion Week in New York City; plus-size model Tess Holliday signed a major contract; Beth Ditto from Gossip has her own line, Torrid, and so much more! I remember being the only plus-size girl, but getting roars like it was a football game when I walked down the runway. Size doesn’t matter; it is about realness, not being a hanger for clothing. I have always felt that fashion was not made to make women feel sexy, it was designed as high art primarily by gay men. The models were not meant to be sex symbols or ideals; they are actually the furthest thing from that, more like blank sexless vessels, moving mannequins that float down the runway and show off unreasonable clothes. Real bodies deserve representation.

Buffalo is a place where all things can be explored. Fashion here has no rules or regulations. Have confidence in what you are wearing and people will adore it. Boring is not a possibility. I rock a fanny-pack most of the time, smelly combat boots, ridiculous faux fur dead great aunt coats, exquisite fashion corpse. My blue collar is bedazzled. The age of irony. Things that are so bad they are good. People wearing ugly sweaters, oversized nerd glasses, tie-dye unicorn t-shirts, and bedazzled denim jackets. Stuff that was always dorky is now being twisted into runway ready. I love that Lisa Frank and The Simpsons have been used for Jeremy Scott. Nostalgic bliss: The 1990s were a special time for people who were little kids then; it was a time of wonderment and growth, before we were battered by everyday problems and real-life issues. We want to go back to that stress-free time and our fashion reflects that. My look is about me—never basic, I don’t need to impress anyone. I want to match my art and express my inner happiness through the clothes on my body no matter what anyone says. Be you. Join the anti-fashion revolution!