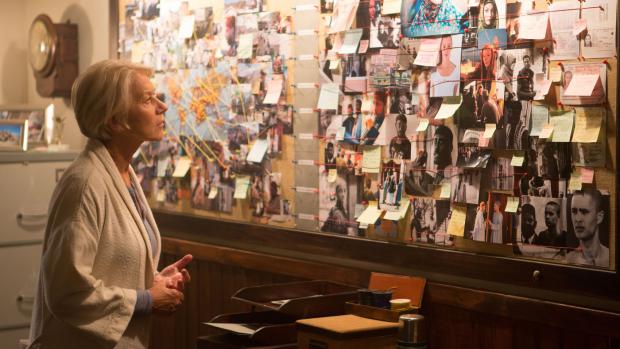 “If only it were that simple.” The line is spoken during a heated discussion between a politician and a military man, though the sentiment goes both ways often enough in Eye in the Sky, a movie in which nothing is ever really simple.

This thriller opens with an international operation to locate and capture a terrorist, a British woman now living and working in Kenya. She and her husband are tracked to a house where a suicide bombing is in preparation.

(This detail is discovered by a camera-equipped drone the size and image of a flying insect. If you thought such things were only found in science-fiction stories, guess again. Try to leave for later the question of what is likely to happen when technology like this gets into the hands of the public: It’s not part of the story here.)

Official orders for the mission are to capture the terrorist and bring her in for questioning. The discovery of the bombing, which is imminent, changes everything. The British and American operatives watching are in a position to prevent a terrorist attack by launching a missile strike on the house.

But, as the man said, it’s not that simple.

In what feels like real time, we watch the operation from the perspectives of its various participants, mostly British and American, linked from around the world by electronic communication: Colonel Powell (Helen Mirren), who has been tracking this target for years; her commanding officer, Lieutenant General Benson (Alan Rickman), who sits in a London office monitoring with several political leaders; the American pilot (Aaron Paul) sitting in a trailer outside of Arizona with his finger on the missile’s trigger; the local agent on the ground in Kenya (Oscar nominee Barkhad Abdi from Captain Phillips). Others check in as needed from around the world as the parties responsible seek authorization for the strike in a situation that keeps changing. It comes down to a single chilling question: Is the life of a single innocent young girl a price worth paying to prevent an attack likely to kill scores of other equally innocent people?

Don’t presume to answer that. Different viewers may react differently to what they see here. But the script by Guy Hibbert gives you all sides of the argument, clearly, compellingly, and without prejudice. If you don’t like to have your opinions challenged and tested, this is not the movie for you. With universally strong performances and tense direction from Gavin Hood (Tsotsi), it’s probably the smartest movie you’ll see this year.

Give it an extra half star for being the final performance of Rickman, who didn’t get film roles this good often enough. He has what may be the movie’s only laugh line, early in the film, asking his wife on the phone if the toy doll he’s supposed to buy for his granddaughter is the one whose box promises, “You will hear her babbling when it is time for beddy-byes.” The line itself isn’t funny, but try not to crack a smile from hearing it in that inimitable voice. You’ll remember it again at the end of the film, when Rickman gets the moving final line.

Classic country music at its best is simple, clear, direct. I Saw the Light, a biography of the great performer and writer Hank Williams, is none of those things. British actor Tom Hiddleston, best known in the US as villainous Loki (Thor’s nemesis) in the Marvel comics movies, inhabits the role surprisingly well, as does Elizabeth Olsen as his wife, a would-be singer with substantially less talent than, say, June Carter. Perhaps hoping to stay away from the reliance on sleazy details that marred the Johnny Cash biopic Walk the Line, writer-director Marc Abraham maintains a sedate tone. But in more than two hours of screen time, he too often resorts to having characters tell us about events that the audience should have seen. The pace is leaden, and the story sends you out feeling as if you know little more about Williams than you did when you entered.