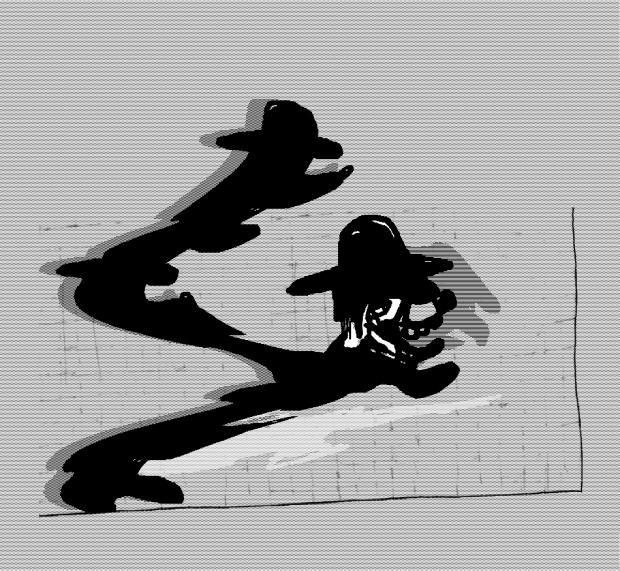 There are some marvels in the seventh and final round of the Amid/In WNY exhibit currently at Hallwalls. Starting with Kurt Treeby’s exquisite production knitted yarn sculptural versions of three iconic modernist to postmodernist architectural structures, the brick and mortar versions of which in two of the case have already been demolished, and in the third has been transformed out of all semblance of it original unique character and form.

The structures are architect Richard Neutra’s Gettysburg Cyclorama Center, once part of the Battle of Gettysburg commemorative complex; Bertrand Goldberg’s four-leaf-clover form Prentice Women’s Hospital, formerly on the Northwestern University campus, Chicago; and James Wines’s bizarre Best Products Notch building, Sacramento, California, a large box building a substantial lower corner portion of which was displaced—as if suddenly and violently—a short distance from the main structure to allow access—create an entranceway—to the building. To underscore the implicit point about our contemporary culture’s throwaway attitude regarding even its most distinctive architectural artifacts, the sculptural versions double as needlework art covers for Kleenex tissue boxes.

Colleen Buzzard’s minimalist abstract constructions are all about strings and grids, lines and planes, planes and solids, chaos and order. How the second element in each of these pairs evolves and emerges from the first. Phil Hastings has a series of little boxed videos of starfish-like primitive life forms—sea-bottom dioramas—evoking old cabinet of curiosities early science museum collections/displays. While Annie Dunsky’s messy delightful oil paintings and chalk or crayon drawings evoke early childhood art. One called Anger Management features a trio of inchoate but not incoherent figures. What looks like a fox and what might be a human figure—possibly in vehement dispute but at any rate both clearly with anger issues—and little yellow duck looking on with dismay. One called Chicken Stu seems mostly about the sensual joys of fingerpainting. It’s short on recognizable imagery, but includes some tries at lettering—words even—but upside down and backwards.

Lily Booth’s artwork is about issues of war and peace. In a war in which genocide had been contemplated as a moral and feasible strategy. A war not of peoples but species. A war on bugs—centipedes, spiders, other such creepy crawlers—in the home of the artist and her family. She describes in her artist’s statement how in the bleakest period of the war, enlightenment occurred, leading to ultimate peaceful coexistence. The artworks look like evidence of war crimes—murder and mayhem—from when the conflict most raged. Watercolor paintings mimicking actual wall segments sneaker sole marked on and around squashed and disintegral remains—missing limbs, missing substantial body parts—of unlucky bug adversaries.

Laura Brothers’s art is on light boxes presenting partial and partially distorted black-on-white images that seem derived from or otherwise reminiscent of old cartoon images. Old Walt Disney. One work seems vaguely recollective of the two racial stereotype crows in the Disney movie Dumbo. The work is called HAIRYPEAR, which doesn’t seem to indicate much—though with maybe a pun on pear, pair—from the artist’s series called FOR THE BIRDS, which suggests—in conjunction with the pun—the two crows idea might be on the right track. Colleen Toledano’s sculptural works are in a variety of materials including wood and plaster and are somehow about body—and particularly body surface, skin—and modifications and alterations one may make to one’s body “to the benefit of one’s physical and mental well-being,” she explains. Portions of her works—one of which is called Skin Core, another Wall Fat—mimic large expanses of skin. One also includes a cast of a sewer manhole.

Mary Begley describes her painting practice as “spontaneous mark making” that starts with one brush stroke and builds layer upon layer upon it, in a meditative process that is about “thinking, feeling, and comprehending on a subconscious level.” She says her paintings present “biomorphic forms set in naturalistic atmospheres” that she calls “spacescapes.” Some of this perhaps in a painting called Sentinel, featuring what might be a biomorphic form. Nothing quite so palpable in three other predominantly black paintings entitled, Black Knot, Black Hole, and one just plain Black. Ad Reinhardt reminiscent. And artist Barbara Buckman has thirty-six pages of drawings, each page featuring two vaguely mechanical or geometrical abstract elements “in animated dialogue,” as she says.

Fotini Galanes has a large wall drawing in her signature drawing style with reference to the human body and its deformations and imperfections, which in her drawings she transfigures and makes beautiful. Gary Sczerbaniewicz has two wall sculpture works with architectural and/or construction industry reference, named after Paul Bremer and I. Lewis Libby, personal nemeses, apparently, and particular disaster figures within the general disaster administration of George W. Bush, the man who gave us ISIS, though with substantial help from Bremer, if not Libby as well. And Michael Bosworth has two carpentry boxes and eerie videos with reference to an extended allegory about the vanity of human aspirations and endeavors in the California desert.