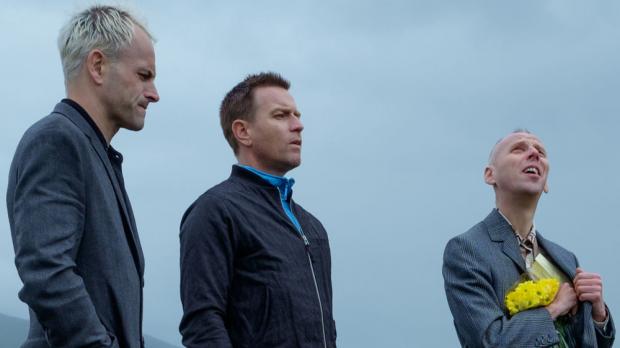 “You’re a tourist in your own youth,” spits Sick Boy at his old friend Renton, and if those names mean a lot to you, the same may be true of you. They were two of the main characters of Trainspotting, the 1996 movie that was to pop culture in Great Britain what Pulp Fiction was to the US, an energetic, startling, nihilistic yet vivacious shot in the arm that spoke to young viewers in a way that no previous film had.

It was an unlikely movie to spawn a sequel, not least because director Danny Boyle has throughout his career shown himself more interested in trying new things than in revisiting past glories. Nonetheless, here is the sequel, titled T2 Trainspotting. (The reference to the first Terminator sequel is, so far as I can tell, simply a cheeky joke.) Boyle reunited all of the main cast, but mostly ignores the sequel novel written by Irvine Welsh, Porno, in favor of a largely original screenplay by his regular collaborator John Hodge. (Rumor is the cast found Welsh’s story too unpleasant, and if you’re familiar with the writer you can imagine how unpleasant that might be.)

Twenty years after ending his heroin habit and leaving Edinburgh with the £16,000 proceeds of a robbery they were supposed to share, Renton (Ewan McGregor) returns. The city where he grew up is kicking off its industrial past, though it shows more demolition than regrowth. Nor have his old friends changed for the better.

Sick Boy (Jonny Lee Miller, looking an awful lot like Peter Capaldi) still fancies himself a player. He’s running a blackmail operation with a Bulgarian prostitute (Anjela Nedyalkova) and dreams to move up to the next step, opening his own brothel. Spud (Ewen Bremner in the film’s most affecting performance), looking more than ever like Gollum after a bad night, is back on heroin after everything else in life let him down. Psychotic Begbie (Robert Carlyle) is in prison, but arranges for his own release after the state declined to do so. Renton claims to be doing well in a new life in Amsterdam, but that turns out to be a lie.

What plot there is serves as an excuse for this quartet to bounce off each other once again, which should guarantee a certain box office from whatever portion of the original film’s fan base still goes out to the movies. But even if you don’t much remember the original film (all I recall from it is the music and a lot of visual jokes involving excrement), Boyle and his players capture a vein of rueful nostalgia, in men with no reason not to look back when the future doesn’t hold any promise. And if T2 avoids the original’s more grotesque moments, it maintains its high energy. Few movie sequels are ever truly necessary, but this one proves more winning than most.

Some stories just seem like naturals for filming, which I’m sure was the feeling of the producers who greenlit The Zookeeper’s Wife, the true story of the managers of the Warsaw Zoo who used the site to hide Jews from the Nazis during World War II. I imagine that the 2008 book, by Ithaca writer Diane Ackerman working from the diaries of Antonina Zabinski, must be filled with compelling stuff. But from the early scenes of the estimable Jessica Chastain cavorting with more cute baby animals than a Disney heroine, Nicki Caro’s movie flails in its search for a consistent focus. It bounces among themes without connecting them, raises issues it doesn’t want to develop, and lets characters fade into the background behind a star playing a too-often passive role in her own story. It’s the kind of movie you show to young teens as a history lesson: the overall story is valuable, even uplifting, but you can’t help but wish it had been better told.