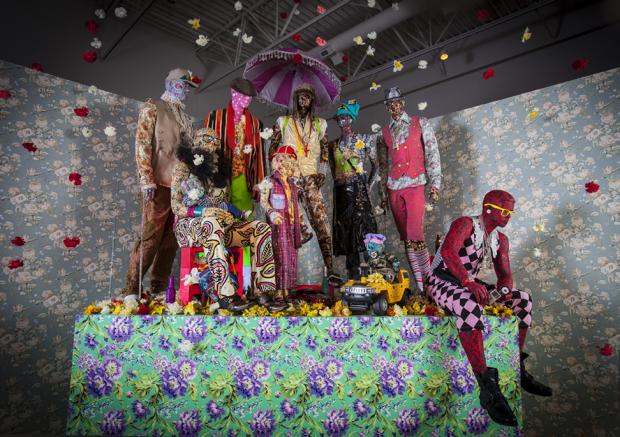 Ebony G. Patterson, Swag Swag Krew (from the Out and Bad series), currently on exhibit at the UB Art Gallery at the UB Center for the Arts.
by
Jack Foran
/ Mar. 29, 2017 12am EST

A dozen or so mixed media fabric and glitter and bling artworks by Ebony G. Patterson are currently on show at the UB Center for the Arts. Works said to explore a range of complex topics including “class, gender, and race,” with particular reference to Jamaican dancehall culture. Touching along the way on “images and reports of violent fatalities” as presented on social media.

Floor-display tapestries with sewn-on or glued-on elements, and items that may be placed on the base tapestry but not physically attached. Such as some toy trucks, a miniature soccer ball, miniature basketball, more or less regulation-size baseball, and on one piece, two pairs of shoes, an expensive-looking alligator and/or snake skin men’s pair, and stilt-heel women’s pair that look more like a torture device. The sewn-on or glued-on elements include various appliqué items, embroidery, knitted flowers—sometimes in pink, sometimes in black—and costume jewelry and gems. Oh, and glitter. Like it had snowed glitter.

Challenging artwork. Requiring a distinction between seeing and looking, according to artist. “Seeing is what happens on social media,” she explains, “but looking is what I’m asking you to do. The looking requires thought, it requires engagement, it requires awareness, it requires inquiry, it requires patience.” (I would have thought just the opposite regarding looking and seeing, what they involve and require.)

And on a connection to ongoing research by art historian Krista Thompson on the use of light in African diasporic cultures. After encountering Thompson’s work, Patterson says, “I started to see glitter for what it is. It is light, it is illumination. I was looking at a lot of party photos on different websites and thinking a lot about light. In this case…photo light and video light, and how the photo light becomes this way of giving visibility to people, and a chance for the ordinary person to shine.”

The manikins piece with outlandish costumes—entirely of men and boys—is said to explore “the body as a contested site regarding what is and isn’t masculine.” The matter of “metrosexuality.” (A word not in my desk dictionary, but Wikipedia has it in the substantive form “metrosexual.” As a combination of “metropolitan” and “sexual” to describe “a man—usually in an urban, post-industrial, capitalist culture—especially meticulous about his grooming and appearance, typically spending a significant amount of time and money on shopping” to achieve those ends. The Wikipedia entry adds that while the term is most often considered to refer to “heterosexual men who adopt fashions and lifestyles stereotypically associated with homosexual men,” it can also refer to gay or bisexual men.)

Further expository material points out that the artist was “inspired by images and reports of violent fatalities she sees circulated on social media,” and that she “creates…images of the deceased that seduce the viewer into bearing witness to the underreported and unacknowledged brutality experienced by those living on the lower rungs of the socioeconomic ladder.” Harder to see this murder violence exploration in the work. Or how it connects—if at all—with the main theme Jamaican dancehall culture. Or for that matter metrosexuality.

Lots of artist and curator talk, but not always cogent or compelling. Plus a bit as if to explain the work, rather than the work explaining itself. Nor any hint about the meaning of the show title, “Dead Treez,” in relation to the work

The Ebony G. Patterson exhibit continues through May 13.