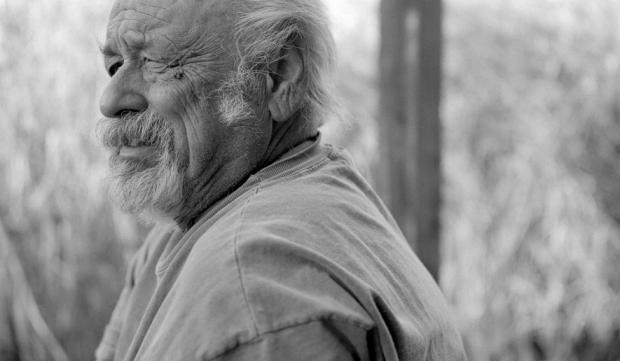 The inevitable death of a massively productive artist shouldn’t be the occasion of a critical assessment, but in Jim Harrison’s case, we’d best get to work now because his stuff might not age well, given the culture’s impatience with heterosexual men of a certain class. We happily embrace medieval expressions of manliness—“Hwaet,” yells the Beowulf re-enactor Benjamin Bagby (like Harrison, also from northern Michigan)—because it’s comfortably remote in time and linguistic distance to read sur-titles about the mead-hall, the warriors’ way, the serene bejeweled Queen Wealhtheow whose bed old Hrothgar retreats to. Harrison’s warriors got their stories read because it’s no more than two pages until the guy’s next orgasm, always in conjunction with lady parts, except the one time, in Sundog, when our hero screws an expert crossdresser in Mogadiscio.

Too much sex. That’s the point. When one reads Harrison past the sex, what’s left? What is it exactly that could be enduring about his output of 18 novels, a memoir, essays about food, and books of poems?

He disliked being compared to that other testosterone-infused Michigan writer, Ernest Hemingway, the doctor’s kid from the Chicago suburb where Frank Lloyd Wright had his studio. Harrison was a striver, not a rich kid. His dad was a civil servant who taught the kids to hunt, including Jim’s sister. So it’s massively genuine when Harrison knowingly discourses on dogs, trout, and partridges. But then the working-class kid shows himself: he insisted on calling partridges grouse. It’s class anxiety. Swells who wear Orvis garb and Filson garments never call those forest birds partridges. That’s the country term for ruffed grouse. But grouse—that’s what the British ruling class calls them. Grouse hunting is Scotland and beaters and shooting starting on the 12th of August, the Glorious Twelfth. In his later writing, after the money started coming in, Harrison gained some class awareness and got much, much better.

But withal, Harrison’s is a mid-1960s Esquire magazine kind of manliness. In his page-turner novellas, like The River Swimmer, there are brand names, brands of hotels in Paris, names of cheeses, wine labels (French only). Characters don’t drive James Bond vehicles but the SUVs are British except when, in the two novellas and one large capstone novel Brown Dog, about the North Country picaresque everyman of that name, the vehicles are caricature rez cars. The Native North Americans in Harrison’s works are often sensitively wrought, which is to say that they come off as psychologically complex individuals with a certain aloofness (like Clarence, the half-Chippewa, half-Finn in True North). But they’re there like revered objects: American talismans to touch.

Harrison is the sort of traveling companion to take on long flights, to cabins in the north woods, to the bunk if what’s needed is not challenge but comfort—the comforting notion that a high-scoring shooter can drink well, eat with an educated palette, conjure intrusive thoughts of constellations or wig up quasi-quotations of ancients, thus demonstrating that somebody was awake during World Literature class.

But here’s why he should be read: He was often capable of beautifully-composed prose, and of a historically insightful metaphor, that speaks of understanding and definite insight into his own kith and kin. We are up to here with Southern fiction following up on but faltering on the promise of more William Faulkner. Ethnic we have and have more of. Harrison is a northerner. Harrison had a sense of place.

He was no Louise Erdrich, the wonder-woman of psychological depth, family sagas, Michif and Anishinabe working-class northerners and their compelling loves, the magical realist to whom it comes naturally, not like clumsy Jim, who did so much better when he wrote of manly men fearlessly acting without remorse or anxiety than he did when thinking up water-sprites.

Will he last? He used to hang around with Jack Nicholson in Hollywood, back in the days when he sold Legends of the Fall (Anthony Hopkins, Brad Pitt, Julia Ormond whose photograph but not name is on the poster) and Revenge (Anthony Quinn, Kevin Costner, and what’s her name, oh yeah, Madeleine Stowe) and made pots of money on those two American versions of the very brief Jorge Luis Borges story The Intruder. But the women in those stories, like the women in the film versions, were for Harrison more props than persons, woman as device to show off the man-prowess. Well-treated, of course, not like in the Borges piece. Yes, he’d proved in his magnificent early novel Dalva that he had the skill to portray a complex mature person who happened to be female, and was praised widely for that achievement. But after that? It was all about where they boys are.

So the oeuvre is large, the going is pretty easy, the language is strong English without much sweet vermouth, and withal, Harrison is awfully good. Boomers may find something of value in The Road Home, which is about how to die, and worth the effort both of composition and of reading. Harrison aspired. He kept working, with The Great Leader (pretty deft portrait of a sexual predator/charismatic charlatan) and an even newer novel just in the last three years. He had Eugene O’Neill’s genius for titles—The Woman Lit by Fireflies, The Beast God Forgot to Invent, The Summer He Didn’t Die.

About the place: He didn’t explore the landscape of his native realm so much as recite the names. Ishpeming, Escanaba, Grand Marais, Marquette, holy Lake Superior, even holier stream-names because they contain brook trout. They assuredly do, but this country is 12 hours drive from here, 8 hours at least from Chicago or Detroit, way west of the Soo, and so the trout are mostly safe, like the partridges of the Upper Peninsula, up there amid the stumps of the great white pine forests whose loss Harrison admirably mourned in so many of his stories. Very admirably indeed.

A sense of place. As if taking instruction from D. H. Lawrence, who wrote about Americans having or not having it, there’s no question: Jim Harrison had it.