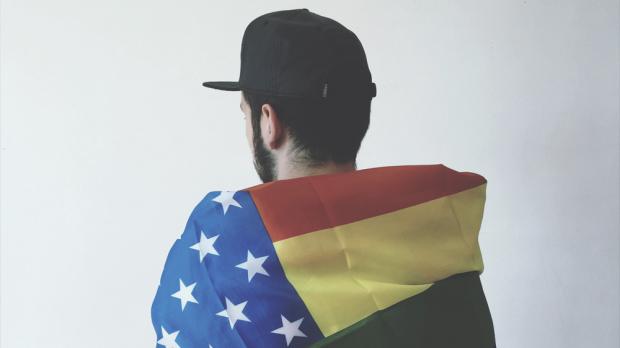 Buffalo-based dance music producer YLXR has recently released a pair of remixes for dance music and fashion icon RuPaul. On top of that, the young producer has produced an original track for RuPaul, titled “Broke Me Down,” which has appeared on RuPaul’s new album American, released earlier this week.

YLXR’s (pronounced like “elixer”) style is pretty unique—landing somewhere between massive club bangers, chillout afterparty vibes, and glitchy hyperpop. On his remixes for RuPaul, these aspects are even more accentuated.

“I guess it all started when a random Twitter user named Johnny, who I’d never spoken to before—he found this bootleg remix I did of a RuPaul song, “Cover Girl.” [Johnny] tweeted it to RuPaul and he loved it. He tweeted it out a few times and posted it on Facebook. I was freaking out because I’m a huge fan of his. I’m a huge fan of Drag Race.”

After a little while, YLXR attempted to contact RuPaul.

“I waited a little while because I didn’t want to seem too thirsty,” he says.

He reached out to him via email after Googling “RuPaul’s email address.” Surprisingly, the email address that came up worked.

“I didn’t really know what to expect. My fingers were crossed that I’d get a response.”

RuPaul did respond, and put him to work right away remixing some of his tracks. He sent through some stems and a cappella’s for the producer to work with and also commissioned him to write an original production, which eventually became the song “Broke Me Down,” from American, which was released on March 24. For that, RuPaul sent him a “top line” vocal melody to build the rest of the song around. He was also given just two weeks to produce it, which meant the pressure was on.

“This is the first time I’ve actually received a firm deadline on something, so it was a little bit of a different work environment, but it was fun and I’m really happy with how it turned out.”

He had to take a bunch of shifts off from his day job to hunker down in the studio to get it done, but he says he thrived under the pressure.

YLXR’s original production, “Broke Me Down,” at first seems to stick to RuPaul’s classic house music style, before splitting into a quantum hyperpop breakdown (think PC Music) and returning briefly to a driving house beat. It’s one of the most memorable tracks on the album, which moves abruptly from catchy hooks, to expectedly cheesy lyrics, to huge EDM breakdowns throughout.

You wouldn’t expect it from listening to his music, but YLXR’s musical background is in singing. Specifically opera singing, which he studied at Crane School of Music at SUNY Potsdam. He hated it.

“It was not for me. A lot of music schools are super traditional and that’s the kind of track they put you on. I was always singing when I was younger and it seemed like a natural progression for me to start doing opera. I thought it was something I could learn to love, but as I studied it I realized it was an art form that didn’t really resonate with me. I didn’t find satisfaction doing it.”

“I would lock myself in my dorm room and force myself to make stuff that sounded the way I wanted it to.”

Prior to writing “Broke Me Down,” YLXR did two official remixes for RuPaul—“Call Me Starbooty” and “Do the Right Thing” which both appeared on RuPaul’s album Remember Me: Essential, Vol. 1, which was released in February.

On his remix of “Call Me Starbooty,” YLXR takes RuPaul’s more straight forward vogue-house style and re-emphasizes almost every aspect of the song. The already electronic-tinged, chopped up vocals on the song become even more glitched out and cybernetic. The understated synthesizers in the original are pumped up to maximum capacity and made central on the remix, and the wobbly bass takes on a life of its own, transforming the track into a downtempo bass-pop spectacle.

“Do the Right Thing” is equally as bombastic and even more catchy. Huge bass drops dissolve into extended beatless atmospheric sections that eventually return to head bobbing half beat pop-tronic breakdowns.

The producer has been making music for a little over two years, now. If you visit his Soundcloud page, you’ll find a full-on club banger titled “Glamorous,” that could fit right in with his RuPaul remixes. “Glamorous” is a chopped up, reworked version of a song by the pop star, Fergie.

“I love Fergie. I need a tweet from her,” he says before getting into the details of how he crafts a track like that.

For something like that, the producer will hunt down a capella tracks from quasi-legal websites to use as his base samples. If he can’t find an a capella version, he’ll rip the audio from a Youtube video and try to isolate the vocals as best he can.

“That’s definitely on the more energetic side of my sound. I have some spooky, moody, downtempo stuff that I do too.”

The producer’s style often entails cutting up vocal samples and pitching shifting them up. This serves two purposes: he finds the sound aesthetically pleasing, but it also serves to mask the source of the original sample.

“If you’re doing a bootleg and you want it not to be taken down, you can pitch shift [the vocals] up because it makes it easier to keep them up on places like Soundcloud. But I also love how it sounds. It sounds really weird and spooky. I think that style kinda of started on Soundcloud and now you hear it all over the radio and on pop tunes. Justin Bieber stuff has chops all over it.”

He recently released a bootleg remix of a song by Ariana Grande, which was up on his Soundcloud page for some time before the streaming service deemed it in violation of copy write laws. It was taken down earlier this week.

“It was up for over a year, too, so I was kind of wondering why it got pulled down.”

He won’t have to worry about his RuPaul remixes being pulled down, fortunately, because as mentioned before, these tracks were commissioned by RuPaul himself.

As we finish our conversation, YLXR takes a moment to reflect a little bit on RuPaul’s contributions to dance music.

“‘Super Model’ came out in 1993 and that one charted and did well. Ever since he’s kind of just been doing his thing. He really has a presence in the history of dance music, which is really exciting. To be on such like a pop culture and queer icon’s record is so huge for me. It’s surreal still.”