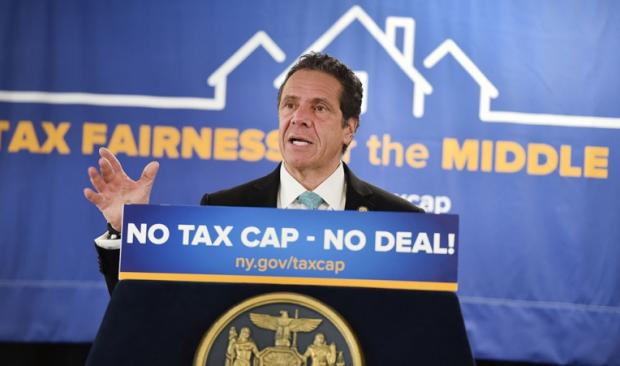 New York City Democrats may dominate the party’s majorities in the state Senate and Assembly, but their colleagues in the suburbs and upstate have needs of their own, complicating the equation for lawmakers both in budget discussion and beyond.

Property taxes, public financing of elections and congestion pricing are among the issues in the governor’s $174 billion proposed state budget that have exposed fault lines between suburban and upstate Democrats and their New York City counterparts. Drivers licenses for undocumented immigrants and marijuana legalization – which may or may not be included in the budget – also pose challenges for a party that has faced questions about whether or not it will favor New York City interests at the expense of upstate and the suburbs.

Republicans have been eager to take advantage of political missteps by Democrats ever since the GOP’s big losses in the 2018 elections. By exploiting regional tensions and alleging that Democrats are mismanaging the state’s finances, Republicans aim to increase the pressure on suburban and upstate Democratic lawmakers who might be more politically vulnerable than their New York City counterparts.

Here are five key issues that might make such lawmakers think twice before getting behind their party’s legislative priorities.

Gov. Andrew Cuomo and Long Island lawmakers have spearheaded efforts to make the 2 percent cap on local property tax increases permanent. While state Senate Democrats passed such legislation early in the legislative session, the Assembly has yet to do the same. New York City Democrats in the Assembly are the reason why. The cap does not apply inside the city and has been seen as a bargaining chip by some lawmakers in negotiations over rent regulations and other issues.

But extending the tax cap could make a big difference for the political longevity of Democratic lawmakers from outside the city, whether in the suburbs, on Long Island or upstate. “For politicians from New York City to understand the power of the property cap, they have to think about it as an issue that has the combined pop in New York City of raising the subway fare and raising rents,” said Bruce Gyory, a Democratic political consultant. Majorities of voters in the city and the suburbs support the cap – with nearly two out of three upstate voters feeling the same, according to the January Quinnipiac poll.

While chances are good that some type of extension will be included in the budget – Cuomo has said he would not sign a budget without a permanent extension – a failure to see the proposal through the finish line would not go down well with upstate voters, according to Chautauqua County Democratic Chair Norman Green. “Everybody in this area is all about keeping property taxes under control so we absolutely want to keep it in the budget,” he said. “Let’s not kick the can down the road and worry about it another year.” If the cap is not made permanent through the budget, then Republicans can campaign next year on how the Democrats kept it from happening.

It is not expected that marijuana legalization will happen in the budget. Among the biggest opponents to including it as proposed by Cuomo in his executive budget is Assembly Majority Leader Crystal Peoples-Stokes, who represents western New York. She wants to legalize recreational marijuana, but has insisted that it only happen if the associated revenues are invested in communities of color that were hurt by prohibition. A March 20 Quinnipiac University poll showed widespread support for marijuana legalization both in upstate, New York City and on Long Island. If it is not in the budget, though, there are doubts that many lawmakers would want to openly cast a vote in support of it, particularly if they see tough elections up ahead. “We have a lot of members who represent conservative areas who don’t think they can vote for a freestanding bill to legalize marijuana,” state Sen. Diane Savino told Cannabis Wire last week.

There is some opposition to the idea among Central New York voters, according to Luke Perry, a professor of political science at Utica College. “Marijuana legalization is not widely embraced,” he said, given the level of resistance in the area from law enforcement. On Long Island, both Suffolk and Nassau counties have moved toward blocking the sale of marijuana, at least temporarily, and upstate counties have made moves to do the same.

However, while legalization is often considered to be a progressive issue, there is some support among libertarian-minded voters who see it as a matter of personal liberty. “People as a whole, both Democrats and Republicans, are of the opinion that if people want to smoke in the privacy of their home or backyard they should be able to do it,” said Green, the Chautauqua County Democratic chairman. “It’s just not a big problem.”

Cuomo and some Democratic lawmakers are making a push to get public financing of elections into the budget. But earlier this month, Assembly Speaker Carl Heastie cautioned that there are not enough votes in his conference to advance the measure, citing concerns about independent expenditures, problems with New York City’s campaign finance system, and concerns about how much it would cost. While public financing for elections has been gaining support in recent years, there has been no recent polling on the issue that breaks down its support by region in New York state.

If Cuomo succeeds in getting the proposal into the budget, it could become an issue for upstate lawmakers and their fiscally-minded constituents, according to Perry. “I don’t think that generally there’s as much inclination for that upstate as there is for downstate,” he said of public financing. “It’s an extension of the idea that your money is going to something that you fundamentally oppose.”

However, some upstate lawmakers might have more leeway to support public financing, depending on the district and how they campaigned in the 2018 elections. While some lawmakers might have to veer more towards the political center, those who campaigned on progressive platforms, like state Sen. Rachel May, who represents the Syracuse area, will have an easier time supporting progressive issues like campaign finance reform. “She’s going to have less political problems than others in supporting a budget that is more liberal than in past years,” Perry said.

Progressive Democrats will likely get behind the proposal no matter where in the state they are from, but lawmakers who represent more centrist or right-leaning districts might have to think twice about how it will go over with their constituents – especially given its fiscal implications in a year when the state is facing an unexpected budget shortfall.

It appears increasingly likely that congestion pricing will be included in the budget, but that does not mean the issue is going away. A big source of opposition to congestion pricing has come from outer-borough New York City lawmakers who claim their constituents would be unduly harmed by plans to toll drivers who enter Manhattan’s Central Business District. However, Hudson Valley lawmakers – whether or not they represent upstate – have demands of their own, specifically that their support of congestion pricing hinges on securing toll offsets for the George Washington Bridge, Lincoln Tunnel and the new Mario M. Cuomo Bridge.

A January Quinnipiac University poll suggests that resisting congestion pricing in favor of commuter-friendly concessions is a wise political move. Upstate voters are equally split on the issue, but a clear majority – 55 percent – of suburban voters oppose congestion pricing while 54 percent of New York City voters support it.

For some Democrats outside the service area of the Metropolitan Transportation Authority, the issue is moot. “I defer to my downstate colleagues on this,” said Assemblywoman Jamie Romeo, who represents part of the Rochester area. But Democrats in the Hudson Valley or on Long Island could face criticism down the road on the issue, even if they get the carve-outs and additional funding they have demanded.

Republicans are out of power and have no qualms taking an absolutist approach to the issue despite the funding needs of New York City’s subway system. “Residents of my district and areas across the state will bear the congestion pricing burden,” said Republican Assemblyman Colin Schmitt, a possible future challenger of Democratic state Sen. James Skoufis. “Congestion pricing in the end hampers the city’s economy and punishes those who work and support it. It’s a lose-lose if you look at it with clear eyes.”

Among the most divisive issues among Democrats is the idea of letting undocumented immigrants get driver’s licenses. New York City voters are split down the middle on the issue, but nearly two-thirds of suburban and upstate voters oppose it, according to the March Quinnipiac poll. Suburban and upstate lawmakers have accordingly been less vocal on the issue, reportedly at the governor’s behest. Only a few non-New York City state senators have co-sponsored legislation that would grant the licenses and none of them have been from Long Island. “For me personally, I haven’t made up my mind,” said state Sen. Monica Martinez, who came to the U.S. as an immigrant at a young age. “There are too many unanswered questions.”

Activists remain optimistic that the bill will pass this session and are highlighting how driver’s licenses for undocumented people will raise revenues and increase public safety. But Republicans have made clear that they will draw a connection between the issue and the party’s wider objections to broadening protections for undocumented immigrants. “Today, it’s college tuition,” Republican state Sen. Robert Ortt said in January. “Tomorrow, it’s driver’s licenses. And one day, it will be voting rights. And those are all things that I find not only abhorrent, but actually are meant to undermine federal law.”

This article from City & State has been shared with The Public via a content-sharing agreement.