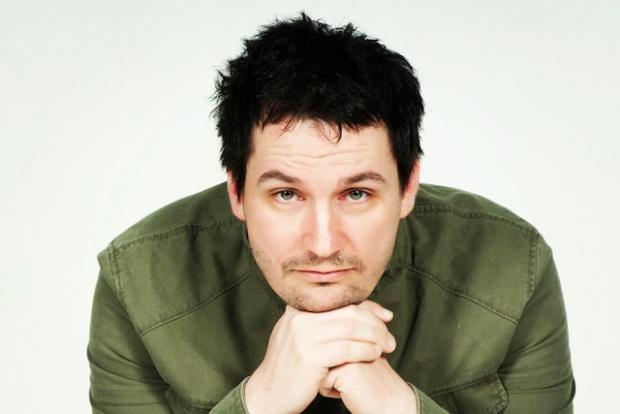 Four walls adorned with a plethora of autographed electric guitars from Red Hot Chili Peppers, Weezer, and Brand New. Posters and framed records from Death Cab for Cutie, Goo Goo Dolls, and the Struts along the perimeter. This isn’t the setting of the Rock & Roll Hall of Fame or the Hard Rock Café—this is James Kurdziel’s office.

Each relic shows the wisdom, memories, and experiences that Kurdziel has gained through many years and many roles. Kurdziel wears many hats—father, comedian, musician, and on-air personality and program director for 103.3 The Edge, just to name a few. These are all roles about which he is passionate, and he especially loves that he is able to do these in the city that he loves.

Growing up in Buffalo, Kurdziel always knew he wanted to go into radio. At eight years old, his mind was made up, and nothing would get him to waiver from his end goal.

Though some doubted that he would be able to succeed in the radio world, Kurdziel had one overarching supporter, his mother Carol. Even when Kurdziel himself started to hesitate and thought he would need a backup plan, Kurdziel’s mother told him he didn’t need a second option, that he would make it in radio.

Though Kurdziel’s mother passed away before Kurdziel graduated from Canisius College with his digital communications degree, her positivity and the motivation she provided her son lives on. Kurdziel was just promoted to vice president of rock/alternative for the Northeast Region at Cumulus Media.

Kurdziel started at The Edge as an intern in 1999 and has remained with the station ever since. He interned with longtime morning show jocks Shredd & Ragan, and was humbled and ecstatic to be hired soon thereafter.

His passion for radio and what it does for Buffalo radiates from everything he does. Anyone who has ever turned on The Edge has either heard Kurdziel’s show during the week or has listened to something directly impacted by him.

“My hope in it is that people hear it and they understand that local radio is still what’s making local culture happen,” said Kurdziel.

He loves everything that comes with radio—the events, the shows, creating and producing content, being on the air, bringing bands in the studio, the annual Edgefest festival, coaching on-air talent, podcasts, and the partnerships. He loves being able to contribute to all of those pieces, and to do so in his hometown.

“I love it here,” said Kurdziel. “It’s important to me. All the things that I like to do, I like for it to find its way back here.”

The people he works with keep him thriving, and in he enthusiastically talks up the accomplishments of his entire on-air personality team. Kurdziel himself was awarded the “30 Radio Professionals Under 30” award twice, The Edge has won “Station of the Year,” and Shredd & Ragan won “Best Radio Show in Buffalo.”  He’s grateful to be a part of all of those awards and to see how hard his colleagues have worked to earn that recognition.

Aside from the music he broadcasts live on the airwaves during the week, he makes music outside of the studio too: He started playing in a band with his friend Ryan, who was a fellow intern at The Edge. The intent of their band, Agent ME, was to be as Buffalo-centered as possible. They played frequently between 2002 and 2010 at various venues in North Tonawanda, Mohawk Place, Nietzsche’s, Showplace Theater, and Music Is Art. The band also played various high school tours as part of anti-bullying and depression awareness campaigns. The band continues to play occasional shows currently.

Kurdziel values the Buffalo music community and realizes the musicians in Buffalo are the ones that keep the scene alive, energetic, and unified.

“When you get into that community, you stay in it,” said Kurdziel. “It’s really the music community, they let you in if you take it seriously, and you don’t leave.”

As Kurdziel’s radio and playing career continued to evolve, he added another element to his resume, this time in comedy.

When Kurdziel started doing radio, he wanted to produce and write funny content and bits, and always dreamed of working with Shredd & Ragan, realizing their immeasurable talent and place in the Buffalo radio community.

Comix Café, which closed its doors in 2007, used to be home to a comedy night every Thursday, which Kurdziel would host. Kurdziel would give away prizes and interact with the audience, but he didn’t tell jokes. One of the comedians there encouraged him to start performing jokes, and when Comix Café closed, Kurdziel went on to do open mic nights. He started performing in 2007, and though at first the reaction from the audience wasn’t what he had hoped for, that was an important springboard. He was determined to work on this new craft and take it to a new level.

Comedian Mitch Hedberg encouraged Kurdziel. Kurdziel brought Hedberg in to perform in North Tonawanda, and after the show, Hedberg told Kurdziel that everyone should try comedy at least once, though Kurdziel was unsure of his talents at first.

“’You’ll be good because everything is good,’” Kurdziel says Hedberg told him.

Kurdziel devoted himself to the craft, and in 2008 he started writing material and spending time with Matt Bergman, Brian Herberger, Rob Lederman, Rick Matthews, Shaun Murphy, and Josh Potter, all local comedians he considered mentors. Kurdziel continued to grow and improve his form.

When the monthly Edge Comedy Night began at Helium Comedy Club, Kurdziel embraced the opportunity to use the club as a vehicle for showcasing local talent., and to put fellow comedians in front of bigger crowds and give them the stage time they deserve.

At an Edge Comedy Night show, one can find Kurdziel talking about parenthood and life with a teenage daughter, life in South Buffalo, and his family—all topics that he wants to be relatable to the audience.

Kurdziel continues his radio career, his performing career, and his comedy because he wants to see good things happen in Buffalo, and is fully invested in this city.

“I want people in other cities to know that you can be in Buffalo, and do really well and live and love Buffalo,” Kurdziel said.