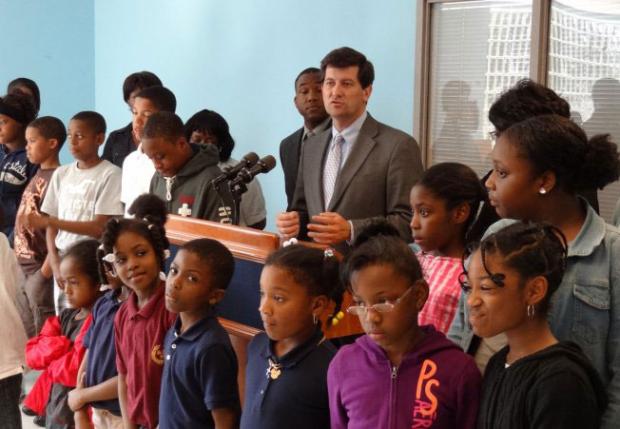 Erie County Executive Mark Poloncarz will be shifting his focus in the final year of his first term.

While the Buffalo Democrat used Thursday’s State of the County address to recount his achievements in the area of creating a robust jobs environment, he also told the crowd that he will now focus on making sure that everyone in the region benefits from the economic gains seen in recent years.

“We have made great strides in the county, but now is not the time to rest,” Poloncarz said. “There are still people in need in our community.”

Last week Poloncarz unveiled an ambitious plan to fight poverty, which he is calling Initiatives for a Stronger Community, noting that while the region has taken positive steps in some areas—falling unemployment and gains in private sector jobs—high poverty rates persist. Now he says his administration will adopt a similarly sensible approach to tackling poverty as it did when implementing his economic agenda beginning in 2013.

“Similar to how we constructed our economic agenda, Initiatives for a Smart Economy, we took our time to come up with a workable and attainable plan to address the issues we face,” Poloncarz said.

Poloncarz is up for reelection this fall and is expected to run for another term. He will likely face Erie County Clerk Chris Jacobs, a Republican, who so far has declined to officially announce his intention to run. But Jacobs’ path to the executive’s office became more inviting this week after Erie County Comptroller Stefan Mychajliw Jr., a fellow Republican who was also eyeing the job, announced that he wouldn’t run and would endorse Jacobs instead.

Jacobs also has the encouragement of Erie County Republican Chairman Nick Langworthy, but he faces a tough battle should he decide to challenge Poloncarz.

The incumbent’s handling of the November snow storm that dumped over six feet of snow in some areas of the county in a matter of days was largely viewed as somewhere between competent and exemplary, and he has also avoided major scandal or fiscal calamity during his first term. A recent internal poll leaked to The Buffalo News by a pro-Poloncarz group shows the county executive leading Jacobs by more than 20 points.

Yet Jacobs is also widely viewed as a competent leader. He is a prolific fundraiser as well, belonging to a prominent Buffalo family that owns the multi-billion Delaware North Companies.

Poloncarz spent the majority of his 45-minute address laying out his vision for the future—poverty initiatives, a plan to spend $25 million on roadwork and the continuation of improvements to county parks, which will see $4 million in upgrades this year.

Poloncarz said his administration has laid a strong financial foundation to build upon: more folks are working, fewer young people are leaving the area, and the county’s credit ratings are at an all-time high. But for the story of Buffalo’s economic turnaround to be a true success, the benefits need to reach the entire community.

“Brick by brick,” Poloncarz said. “We will not finish the work until we build inclusively on our past accomplishments to create the successes of tomorrow.”