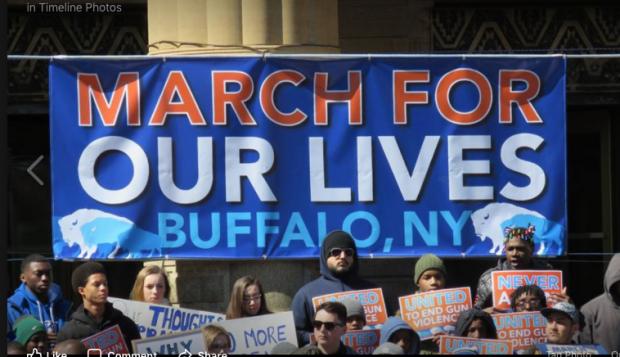 I experienced gun violence when I was young. My best childhood friend was murdered with and by a gun. The deranged killer would not have been able to commit this act if he did not have access to this gun. This happened in Miami but it could have happened anywhere in America. Not a day has gone by in the nearly 40 years since this occured that I do not think of my friend.

The message that enough is enough resonates deeply with me. I am not a proponant of the Second Amendment as it is practiced today. I think that the NRA has begat more violence, more deaths, and more destruction of our culture than any other single institution. Those who obey the powerful lobby and do their bidding in politics have been put on notice by the children of this nation. Enough is enough.

Yesterdays protests around the nation and around the world led by the determined, articulate, and powerful children from Parkland, Florida’s Stoneman Douglas High School came to Buffalo. Our children are standing tall, talking proud, and will lead us to a new era where we can all be safe from the violence that comes from guns. Thank you for your leadership and your service to a grateful nation.

A brave and articulate child, Yolanda Renee King, the grandaughter of Martin Luther King, Jr., spoke at the March for our Lives rally in Washington on Saturday.  She said, “My grandfather had a dream that his four little children would not be judged by the color of their skin, but by the content of their character. I have a dream as well, that enough is enough.”  The dream is alive, Yolanda: