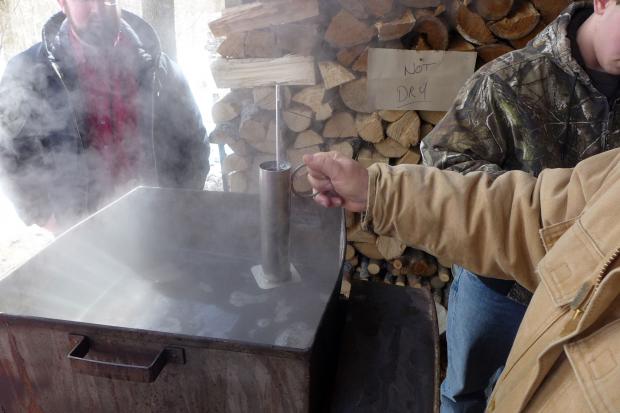 Head in any direction away from the epicenter of the city of Buffalo and roughly 20 minutes into the drive you arrive in agrarian territory—one of the many joyful bonuses of living in Western New York. And the renaissance of urban farming means that this farm-searching journey could be shortened to twenty blocks or so.

Regional festivals focus on seasonal events and holidays (think upcoming Dyngus Day hoopla) as well as what Nature throws our way. This bounty includes maple syrup, the wondrous stuff that comes from the abundance of maples trees growing throughout New York State, and the rest of the northeastern United States and Canada.

This past weekend New York State Maple Producers Association held their 20th Annual New York Maple Weekend at over 50 farms in 13 counties. According to organizers, Wyoming County leads the state in maple syrup production. Another Maple Weekend happens on March 28 & 29 and the association website lists all the venues.

Here’s a CliffsNotes version/refresher for city folk: Spring temperatures mean, as with humans, that things are thawing and flowing again. The guts of the trees freeze in winter and thawing means that sap, the lifeblood of the trees, gets moving: tapping trees takes the subtly-sweet sap from the tree and into collecting containers. The simple act of slow-rolling boiling yields maple syrup: 40 gallons of maple sap equals one gallon of maple syrup and those manning the fires may tell you how Native Americans miraculously discovered how to make syrup from “sweet water.”

On March 22 The Public took a bucolic field trip to Beaver Meadow Audubon Center in Java Center in Wyoming County, double that 20-minute jaunt plan from Buffalo. The sunny day meant muddy parking lots and hiking trails still partially buried in snow. Their Maple Harvest Festival happened in their visitor center where pancakes were served as well as jack wax—syrup over snow, served with a side of dill pickle and plain donut. According to volunteer Carol Welsh this is a longstanding Vermont tradition.

Retired tree farmer Fred Thurnherr out in the Audubon sugar shack gave samples of raw sap, joking that “the hallucinations will stop in two hours.” A font of tapping, boiling and syrup facts, he relays that “sap is two percent sugar, and maple syrup is 60 percent sugar.” Education director Lauren Makeyenko, who was also outdoors, making maple cotton candy, showed off the center’s living, pet-able species (frogs, turtles, snakes, bees, cockroaches). Executive director Loren Smith says during the visit: “If you can go to Ellicottville for a beer, you can come here to recharge your batteries.” The Public suggests that might be a great bumper sticker to sell in their gift shop.

Considering the quantity of maple trees within city limits, a search was done to uncover those who practice urban tapping, yielding Matt Kauffman of 5 Loaves Farm at the northwest corner of West Delavan and West Avenue. Matt, a Syracuse native, moved to Buffalo in 2010 and is harvesting syrup from three trees. A few years back he gave tapping demos in Delaware Park, discontinued due to an abundance of red tape.

5 Loaves Farm has a CSA program and will feature maple syrup in its first bag of edibles. For those who wish to tap their own maple trees, Matt says the materials are not available at any hardware store. ” I picked up my supplies from a farmer out in Attica and went there to pick them up. A lot of it is specialty stuff—the filters, tubing and taps that you put in the tree. Don’t boil off the syrup inside, it’ll ruin your kitchen. Use a propane turkey roaster outside. If you boil all day, it’s about a full tank of propane. It’s definitely more of a hobby thing, not necessarily the most cost-efficient way to get maple syrup.”

And, he adds: “The mission of our farm is to help people turn more into producers than consumers, to produce our own food (and syrup!) right here in the city.”