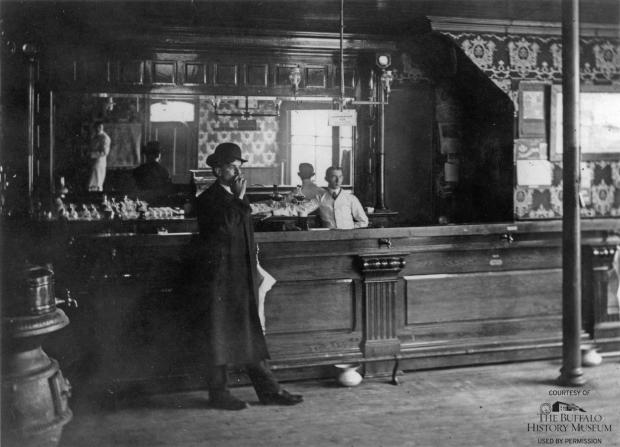 Schardt’s, a saloon operated by John Schardt at 2095 Main Street at the southwest corner of Humboldt Parkway, was a landmark of the so-called “Buffalo Plains” from 1879 to 1911. In 1910, roughly when this photograph was taken, Buffalo was America’s 10th largest city with a population of 423,715. 1,425 saloons were in operation, or one for every 297 residents.

Here, a patron’s black derby hat is typical for the period, as is the bartender’s neat white jacket. Canandaigua Ale, manufactured by McKechnie Brewing Co. of Canandaigua, New York, is advertised behind the bar. John Schardt, American born to German nationals in 1847, was a prominent local Republican, member of the Catholic Mutual Benefit Association, and sponsor of the Ramblers Bicycle Club, which often met at his saloon.

Today, the site of Schardt’s is occupied by the Humboldt-Hospital Metro Rail station. The view out onto Humboldt Parkway that would have been enjoyed by Schardt’s patrons was marred by the completion in 1952 of the Main Street underpass, the first leg in the construction of the Scajaquada Expressway.