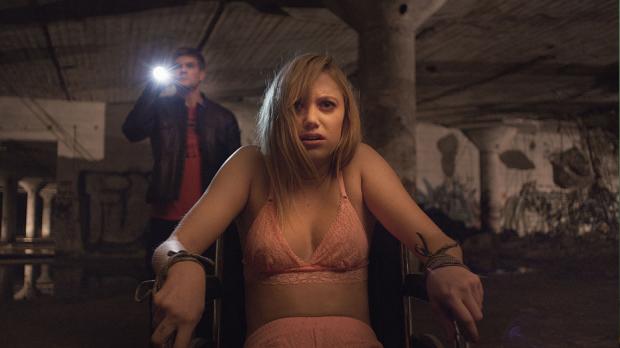 It’s been a very good year for horror movies, a genre that seemed to be in terminal disrepute after a decade of torture porn. The micro-released The Babadook and A Girl Walks Home Alone at Night showed that independent filmmakers pursuing their own visions are still capable of getting under our skin. It Follows also does that, and shows that there’s a market for movies like this: A success at the Cannes, Sundance and Toronto Film Festivals, it was scheduled only for limited and video-on-demand release but did so well in the few theaters where it played that the distributor decided to go for a wide release. (Given that one of the things this film does so well is utilize widescreen cinematography, a theater is definitely where you want to see it.)

Classical horror movies are games, played out by a set of rules that are perhaps arbitrarily devised but commonly understood: we all know what vampires can and cannot do, allowing us to play that game. (Like Monopoly, you can change the rules if all the players agree to it at the outset, which keeps new versions of the game fresh.) In postmodern horror movies, you’re only given some of the rules; the game consists of discovering the other rules.

It Follows is a horror movie with a new set of rules. The players are teenagers in a Detroit suburb. The monster is an unknown entity that stalks the person who has been tagged; no one else can see it. It can assume any form; it cannot speak; it can only walk. But it will not stop, no matter how far away from it you get. And it will kill you—horribly, in the scene that opens the film. The only way to get rid of it is to tag someone else, by having sex with them. But if it kills them, it will then come back for you, and then the person who tagged you, back through the line.

This is all more elegantly explained in the film, which has minimal exposition. The writer-director is David Robert Mitchell, whose first film was the indie success The Myth of the American Sleepover, about characters poised at a point between their teens and adulthood. It Follows has much in common with that, though obviously to different ends, though its motivations aren’t always clear: In an interview with Slate, Mitchell explains the link between sex and death by describing sex as something we engage in to forestall mortality, but the effect mostly reminds us of all those slasher movies of the 1980s that punished sex with death.

The film is set in the dog days of summer, and it has an almost oppressively timeless feel to it. (There are so many retro details—cars, TV sets, old movies—that you would think it was set in the 1980s were it not for the occasional cel phone.) These kids are as trapped in their lives as they are by any supernatural menace.

It Follows only falls apart in an unsatisfying climax that didn’t make any sense to me (and I’ve seen the film twice). If it’s intended to leave room for a sequel it’s clumsily done, which isn’t to say that I wouldn’t like to see a sequel—it’s a game I’d be happy to play again. Opening Friday at the Amherst Theater.

The rules of the vampire genre are parodied affectionately in the mockumentary What We Do in the Shadows, an oddly portentous title for such a goofy movie. Filmed in faux reality show style, the movie follows six months in the lives of four flatmates who also happen to be vampires. We first meet them during a meeting to discuss the housekeeping arrangements, which doesn’t go well: Vladislav, who is the most “old school” of the bunch (he’s 862 years old) protests that “Vampires don’t do dishes!” and suggests they solve the problem the way he always used to, by getting some slaves.

Along with Viago, an 18th-century dandy, Deacon, a Nazi bloodsucker, and Noseratu-esque Petyr, the flatmates discuss various problems with modern vampire life, like dressing to go out clubbing. (Hard to do when you can’t see yourself in a mirror.) They add a new vampire, Nick, who has trouble learning how to fly and insists on trying to pick up women by saying he was the inspiration for Twilight. And of course they rumble with a pack of werewolves who are trying to clean up their act: Rheir leader admonishes his guys that “We’re werewovles, not swearwolves.”

Posing as a production of the “New Zealand Documentary Board” might make you suspect Peter Jackson returning to his roots, and it does have some of the flavor of his early pre-Tolkein films, but the actual perps are Jemaine Clement (of Flight of the Conchords) and Kiwi filmmaker Taika Waititi (Eagle vs. Shark). The movie is a bit overlong, and as always in this kind of thing the jokes are hit and miss. My favorite was Vladislav’s explanation as to why vampires prefer virgin blood.) It’s also at the Amherst Theater, making it a perfect double feature if you’re too creeped out by It Follows.

Of the five films nominated for the Best Foreign Language Film Academy Award for 2014, Wild Tales from Argentina is by far the most audience friendly, so much so that it’s a little surprising that it got nominated.: word of mouth will do more to get this film an American audience than an Oscar might have.

Written and directed by Damián Szifron, Wild Tales is an anthology of six stories, generally connected by a theme of revenge. The tone is set by the brief opening segment, which lets you know that you are in for some very dark humor indeed. Humor isn’t a constant: a few of the segments, featuring a waitress debating whether to poison a villain from her past and a rich man trying to keep his son out of prison, aren’t funny at all. Think of Pulp Fiction without the structural games (none of the stories are connected) or various episodes of The Twilight Zone. But the best segments—an incident of road rage that spirals out of control; a wrathful bride who learns at her wedding that her new husband was unfaithful; an engineer (Ricardo Darín, a familiar face to foreign movie buffs) decides to fight an unfair parking ticket—are little masterpieces of escalation with satisfying climaxes. It’s not without its shortcomings, but taken as a whole it’s hugely enjoyable. It opens Friday at the Eastern Hills Cinema.

The audience for those three films combined probably won’t equal the Friday night crowd for the Will Ferrell-Kevin Hart comedy Get Hard, but I guess it’s pointless to complain about that. Ferrell plays a rich man sentenced to ten years in San Quentin for a crime he didn’t commit; Hart is the car washer he hires to teach him how to survive in prison on the assumption that, as a black man, he’s done hard time himself. Actually he’s a family man who lets the lie stand because he needs the money. “All I’ve gotta do,” he tells his skeptical wife, “is be every stereotype he already thinks I am.”

Would that the rest of the film lived up to that level of self-awareness. Instead, it’s awash in jokes reeking of racism and homophobia, and while I’m sure that the films creators would argue that they’re simply trying to air out these differences, they utterly lack the finesse to walk that line. It’s amazing to read that writers Jay Martel and Ian Roberts are the showrunners behind Comedy Central’s often brilliant Key & Peele: They are clearly saving their best stuff for the small screen.