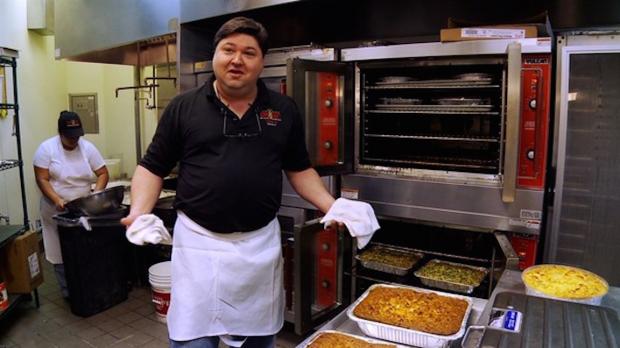 Deli Man is a nostalgic celebration of a once-ubiquitous urban culinary institution in America: the Jewish delicatessen. Erik Greenberg Anjou’s spirited but occasionally poignant documentary examines these distinctive restaurants which have offered a rich, if unpretentious, gastronomic experience for well over a century in America’s larger cities, although, as the movie makes clear, now in greatly diminished numbers.

There once was such an establishment in Buffalo, on Hertel Avenue. Its menu wasn’t quite as extensive a some of the delis visited in Anjou’s movie, but it was more than adequate, and what it served was authentic and virtually unique in these parts. (Besides the regulation chicken soup, there were cabbage soup, roast chicken, blintzes, and matzoh brei.) It was owned by an ordained rabbi, and one day he confided to me his disappointment with many local residents, especially some from the Jewish community, who claimed, he said, to want a real Jewish delicatessen in the city, but patronized his place infrequently, often only on holidays. Eventually, he closed it. I heard he moved to Toronto. (Anjou includes stops at two or three delis in that city.)

Mass-market enterprise has since partly filled the gap, and spread out, here and elsewhere, and now spurious, doughy, fastfood bagels abound. One area supermarket chain has a deli counter at one of its suburban stores, but authenticity apparently isn’t a specialty: Their noodle kugel isn’t even as good as the ones I used to make—if I do say so.

The title’s deli man is David “Ziggy” Gruber, proprietor of Ken and Ziggy’s deli in Houston, practically ground zero for Tex-Mex eating, and not the most likely locale in which to find an outpost of bona fide Jewish deli food. But it’s thriving, nonetheless. Which is more than can be said for much of this once seemingly entrenched industry sector. There’s a sign in Ziggy’s which reads, “There are two kinds of people: Those who love delis, and those you shouldn’t associate with.” Unfortunately for the first kind, there are large and growing numbers of the second kind.

At one point, journalist and cookbook editor David Sax (no relation) estimates there are probably 150 delis in this country outside New York City, a tenth of the number that existed in the early 1950s. In New York alone, in the 1930s, he thinks there were 1,500 kosher delis, and as many again that didn’t adhere to dietary strictures. Now, he says, there may only be about 150 of either kind left in the city.

What happened? It amounts to capitalism as usual. Increasingly prosperous and assimilated Jews abandoned the city for the suburbs, much as Jewish residents north and south of the Hertel corridor left that area. Cities’ real estate economies don’t usually favor independent business of any sort. The owner of the famous Carnegie Deli in Manhattan says there are only five major delis in New York that own their own sites and are therefore somewhat safer. And the cost pressures on deli owners can be severe. As one Brooklyn owner points out, with perhaps some exaggeration, “Meat is 99 percent of the menu and cost,” and the cost of beef, necessary for the braised brisket and de rigueur pastrami, has been climbing, pushed by drought conditions. These restaurants’ very need to be authentic can narrowly limit how much they can adapt to market forces.

Ziggy, for one, isn’t even tempted to respond to fashion and economics. He dismisses “fusion” cooking, whether Jewish or Asian. Ziggy’s old-school, and he’s earned that stand, in an odd way: He once worked in what was Britain’s only Michelin three-star restaurant, while his father subsidized him overseas to keep him from working in his own deli, wanting something better for his son. It didn’t work.

The ebulliently friendly disarmingly “hamish” Ziggy bustles around, checking on the kitchen, meeting the delivery people before dawn, and greeting and kibitzing with customers, many of whom expect a host to be accessible. They can be a demanding lot; a lot of them consider themselves experts on the fare. They used to be a colorful, louche clientele, too. One writer says delis in New York and Chicago were gathering places for “bookies, Jewish criminals, and aspiring Jewish criminals,” the sort of characters caricatured by Frank Loesser and Abe Burrows in their musical Guys and Dolls, much of which is set in a New York deli.

Ziggy ruefully concedes all the pressures, but he can imagine no other way of life. The movie follows him on a touchingly resonant trip to his ancestors’ synagogue in Budapest, from which most of his family was shipped to their deaths by the Nazis.

To a perhaps surprising extent, Jewish delis are like French neighborhood bistros. Both offer traditional home-style food, expertly turned out. But Sax observes that there’s one anomaly behind the state of these restaurants in American: “These are immigrant restaurants,” with cooking “from places people no longer come from.” Hitler and his Final Solution eliminated most of the population in Middle and Eastern Europe which supplied the immigrants who started urban delis.

Deli Man can certainly leave one wanting to visit one of these places and fondly remembering their dishes. It also sneaks in a more sobering note.