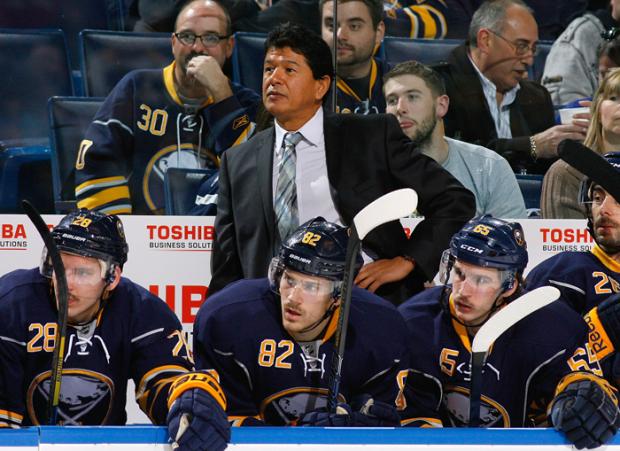 You wouldn’t know it, but tonight the Sabres will play one of the most historic, if not most important game in franchise history.

In it, they play the only team with a significant chance to threaten their lead at the very bottom: the Arizona Coyotes. The first game during a tank season where it’s completely realistic to say that the entire spirit of athletic competition has turned itself inside out: winning is the new losing.

Both teams are fated by luck, pluck and design to finish dead last in order to guarantee #1 or #2 overall pick. It’s not an accident that two consensus future all-stars are waiting in the wings to give flight to a feed-lot chicken of a franchise (even the bones are wieldy and dense). But only one chicken can win Best in Fair. For the loser (or winner), only a puncher’s chance remains for a shot at stalwart prospects Jack Eichel and Connor McDavid.

Adding to the moment is that the architect of both teams’ abject lot, Coyotes’ assistant GM, Darcy Regier, is in position to exact his pound of flesh from the team that fired him. The team that employed him through four ownerships and three Stanley Cup runs, the team he steered into the ground with dry aplomb while asking fans to please tolerate some suffering, will be in town to double down on his promise.

Arizona’s spirit animal is well accustomed to feeding on dead animals, but the Sabres may have met their match with this squad that has won only 3 of their past 21 games. It takes the sting off that the Coyotes beat Detroit on Tuesday in overtime. They’re riding a hot streak.

If those world-beating ‘Yotes trundle into town as if into an unguarded chicken coop, they be met with the strangest of all rewards: applause. Fans at the last Sabres game did the unimaginable and cheered for the New Jersey Devils, possibly the least applause-worthy franchise in sports.

At the center of the storm stands Buffalo’s folk-hero coach, Ted Nolan, who once again has been handed a turd burger and asked to treat it as filet. GM Tim Murray is known to favor a minor league

coach in Ottawa’s system named Luke Richardson, and Nolan no doubt sees the writing on the wall. The easiest way to fire one of the most popular figures in Buffalo sports history is flush him away along with the awful smell of losing in the spirit of renewal, and hand Richardson a young and very talented roster.

Nolan’s not alone in swallowing pride. The team’s captain Brian Gionta has played 112 playoff games, winning the cup with New Jersey in 2003 and captaining the Montréal Canadiens’ deep playoff run last year. There’s just no way that he accepts the organizational plot to fail this hard.

So nestled inside the layers of irony that this game symbolizes is that players for either team gain nothing personally by losing. In fact, both rosters are heavily comprised of minor league talent that is getting perhaps their best shot at ever carving out a place of their own in the world’s most prestigious and lucrative hockey league. By the time the regarded draft picks come into their own, the rosters of both teams will be drastically different.

In this case, the kids making peanuts and the veterans with one skate in retirement control the fate of the teams’ shot at a generational shot in the arm.

We’ve all watched Scott Norwood’s kick in slow motion many times. There’s those first moments when the ball hits the air with the black night behind it where it always feels like everything is going to be all right. The Sabres’ “ball” is suspended in the air for the time being, pending the outcome of tonight’s game against the Coyotes and their rematch in a few days in Arizona.

The rest of the league can have their fun with real hockey, I’ll take the only thing we have: watching this stinker float slowly towards the brink of the Falls and hope for the best.