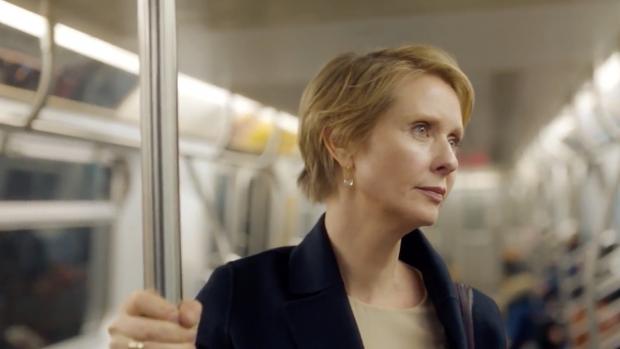 I watched Cynthia Nixon’s YouTube video kicking off her anti-corruption-outsider-to-the-left-of-Cuomo remake of the original, starring Zephyr Teachout, and came away disappointed. I like Nixon’s passion about public education, but the rest of it was as if she was running for a city council seat, not governor of a huge and diverse, economically complicated state.

It’s 126 seconds long. It starts out with her chatting indistinctly with her kids at the kitchen table, which carries powerful political symbolism. “New York is my home. I’ve never lived anywhere else”, she says as she is shown loving her kids. At 0:19, an image of her as a kid with her mom is mated to her voice-over about growing up poor, raised by a single mother. “New York is where I was raised, and where I’m raising my kids”, she redundantly adds, as the video shows her sitting on her couch drinking coffee with her kids.

“Our leaders are letting us down”, she says against a backdrop of lower Manhattan’s majesty and the Brooklyn Bridge. “We are now the most unequal state in the entire country…” she says as the image switches to a depressing residential cityscape of abandoned and dilapidated homes. At 0:45, she adds, “…with both incredible wealth, and extreme poverty.” Redundant, and again juxtaposes imagery of Manhattan against some abandoned, boarded-up brownstones.

0:48: “Half the kids in our upstate cities live below the poverty line.” 0:52. This line is spoken against an image of a rather charming, unidentified main street with a backdrop of snowy Adirondack-looking mountains. “How did we let this happen?” she adds against an image of the corner of a boarded-up house. This brings us to 0:55.

We are not yet half-way done with this video, and everything she has to say about any part of New York outside of the City’s five boroughs has been said. Seven seconds out of a 126 second ad. Seven seconds; just 5% of the ad.

We then quickly cut to Nixon walking in slow motion down a New York City street as her voice-over declares “I. Love. New. York. I’ve never wanted to live anywhere else” — this is second time we’ve heard this sentiment structured in exactly this way. We get it; we’re here, too.

At 1:02, the camera shows us a corner of the Washington Square Arch in Greenwich Village. “But something has to change” shows the image moving from a busy, peopled midtown Manhattan street to another dilapidated urban neighborhood. “We want our government to work again”, she says as the camera shows her heels walking along the sidewalk, then the back of her head, then her face. “…[O]n health care, ending mass incarceration…” It’s now 1:10 and we’re back in midtown Manhattan. “…[F]ixing our broken subway. We are sick of politicians who care more about headlines and power…” cut to an image of lower Manhattan and One World Trade Center, “…than they do about us.” 1:20, cut to video of Nixon giving a speech somewhere, saying, “it can’t just be business as usual anymore” as the camera cuts to her entering the subway.

“If we’re going to get at the root problem of inequity, we have to turn the system upside down”, as she is shown at 1:29 waiting for her train, bodega coffee in hand. ”We have to go out ourselves,” she says as she’s shown standing in an empty subway car at 1:33, “…and seize it. This is a time to stick our necks out”, she says against images of her addressing various protest rallies to establish her activist bona fides, “…to remember where we came from. This is a time to be visible. This is a time to fight.”

Cut to an image of Nixon on an Amtrak train. “I’m Cynthia Nixon. I’m a New Yorker. And together, we can win this fight.” Her gaze shifts from looking out the window of the train, to looking right at the camera at 1:57. The video ends with the campaign logo and what purports to be a conductor announcing, “next stop, Albany”.

1:23 to 1:33 shows Nixon on the subway, which is a huge issue for City denizens. She also mentions it at 1:12 to 1:13. That’s 11 seconds dedicated to the MTA, and 7 seconds devoted to literally every part of the state of New York that isn’t within the five boroughs, not counting the Amtrak ride to “Albany” which is where New York’s governor has to work. 7 seconds devoted to everything from Buffalo to Middletown; Poughkeepsie to Plattsburgh; Binghamton to Watertown.

We learn from this video that Nixon has concerns about economic inequality, the subways, and the schools. These are all valid and good, but upstate isn’t some monolith for people in million-dollar Brooklyn brownstones to dismiss and stereotype. Not everything north of Dutchess and west of the Hudson is a poverty-stricken, post-industrial Dickensian hellscape.

I get that this is a “get to know you” video, but running for governor isn’t the same as running for city council. Western New York, Central New York, the Mohawk Valley, the Hudson Valley, the Southern Tier, the Catskills, and the Adirondacks and North Country all have very specific and often divergent and conflicting issues that don’t all allow for a dismissive, seven-second, ‘upstate kids are poor and whatnot.’

Zephyr Teachout literally wrote the book on American political corruption. Cynthia Nixon is an actor who has been active in LGBTQ and public school advocacy. The YouTube video has a little over 100,000 views, and the channel has 288 subscribers. The tweet has 75,000 likes and 19,000 retweets.

I think Nixon has a lot to learn about the state she seeks to lead, and there’s a whole, big, complicated state beyond Yonkers, Mount Vernon, and Pelham.