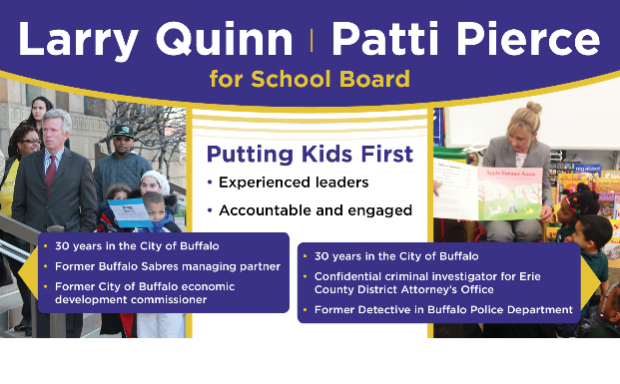 When it comes to the Buffalo Public Schools, we have clearly entered a period of severe and acute self-parody.

The new majority on the school board — Paladino, James Sampson, Patty Pierce, Jason McCarthy, and Larry Quinn — were ostensibly elected to fix longstanding structural, substantive, and procedural issues facing the beleagured district. Perhaps Paladino and his cohorts are taking a cue from revolutionary Cuba — perpetuate the crisis to remain politically relevant and legitimate. After all, if everything is going smoothly, and the emergency has ended, who needs their special brand of “leadership”?

The past 15 years of schools stewardship have been marked by failed experimentation. The popular and effective Marian Canedo was superintendent for 4 years, and left abruptly before her contract expired. After an interim period, the board retained Dr. James Williams, whom they ultimately had to pay to leave. Amber Dixon was interim superintendent for a year before Pamela Brown was hired to serve from 2012 until this new majority forced her retirement in 2014. She had about two years to try and turn around a lumbering behemoth, and the majority essentially hand-picked Donald Ogilvie to serve as interim superintendent while they performed a national search for a new permament placement.

Ogilvie has barely served a year, and Paladino now wants him fired because … well, here’s what Paladino says,

Paladino said Ogilvie has become an obstacle to making the dramatic reforms the district needs to move forward. Even waiting until June or July for Ogilvie to leave is too long, he said.

“I will be presenting a motion to terminate his employment effective immediately,” Paladino said. “I do what I think is right. I’ve reached the point where I felt betrayed. I feel there was a lot of treachery.”

It’s no secret that members of the board majority have been disappointed in Ogilvie’s performance on the job, saying they expected more sweeping and immediate changes than have occurred under Ogilvie’s leadership. Paladino said Ogilvie misrepresented his position when he met with the board majority prior to his appointment.

Board majority members were clear about their vision for the future, Paladino said, and Ogilvie led them to believe he was on board.

But over time, Ogilvie’s lack of enthusiasm for charter school takeovers, slow movement on school downsizing, and general unwillingness to fire administrators and reduce the size of the Central Office has frustrated the board majority.

The “snap your fingers” method of effecting wide, sweeping privatization simply isn’t real life. Paladino may be the dictator within his narrow business interests, but he is now an elected official — a trustee who owes taxpayers and students a fiduciary duty to do the right thing. What we’re witnessing, however, is utter lunacy. This is cloud-cuckoo land, and even Paladino’s own allies think he’s gone too far. The majority may be disappointed in Ogilvie, but not enough to throw the entire district into further disarray and fire him before a replacement has been found. Because to do so would be irresponsible and stupid.

The minority, for its part, is already under constant siege by Paladino’s intemperate and childish mouth, and can do little more than use their own words and conduct to be islands of class in a sea of intemperate privatization. Parent activists have demanded that Paladino resign, and suggest that Carl’s own South District constituents are silent because they’re, frankly, embarrassed they elected him to be a constant, stupid distraction. I don’t know whether or not that’s true, but if Pamela Brown only got two years to turn around this district, why should Paladino get one day more?

“It’s always everybody else who’s the problem,” said the Rev. Kinzer M. Pointer, pastor of Agape Fellowship Baptist Church. “We need Mr. Paladino, for once in his life, to take an honest look and determine that he’s the common thread.”

What if Paladino has made the dysfunction worse, not better? That’s the charge, and it’s quite persuasive. Members of the parent group are sick and tired of administrative and legislative ridiculousness, and calling for a federal receiver to take the district over. What an incredible indictment that would be.

In the end, we’re learning that a functioning, collaborative school board is important in order to effectuate change and improve results for students. Even if you buy into the privatization model being pushed by Paladino and his confederates, the fact that they have so far failed, and that Paladino now wants to fire his hand-picked superintendent for putting students before politics, establishes how words don’t translate into deeds if you denigrate and dehumanize, rather than persuade and compromise.

Ogilvie explains that his job was made harder by the fact that “key positions” were vacant, and he’s had an uphill battle made worse by a distracted, belligerent board.

Buffalo and its students deserve better than this pseudo-reformist clown car. Perhaps it’s time for a receiver to assume control of the schools and render the board as irrelevant in law as it has become in fact.

As for Carl Paladino, he was sworn in to that school board on July 1, 2013. He seldom gives people time to do his especial bidding, so who will call for his expulsion or resignation come July 1, 2015? After all, what’s good for the goose is good for the tea party gander.