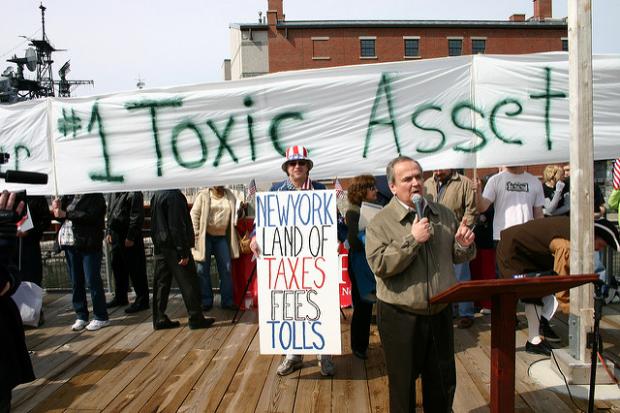 An Albany Grand Jury yesterday indicted state Senator Robert Ortt (R-N Tonawanda) and former state Senator George Maziarz on felony election law violations arising out of Maziarz’s 2012 and 2013 campaign finance disclosures. The details of the indictment remain under seal, so the details are unknown, but investigations into the handling of Maziarz’s campaign accounts have been swirling since the time of the defunct Moreland Commission. Former US Attorney Preet Bharara took over the Moreland investigations after Governor Cuomo dissolved the commission, and Attorney General Eric Schneiderman has had parallel investigations underway, which generated these indictments.

Bharara’s office transferred to Schneiderman’s the investigation into allegedly improper spending from Maziarz’s campaign accounts — the term “money laundering” had been used in prior reports. Maziarz’s still-active campaign committee recently sued its former treasurer over $200,000 in spending. The Gazette reports that the former treasurer has been cooperating with authorities.

Former Niagara County Republican Committee chairman Henry Wojtaszek pled guilty to related election law misdemeanors yesterday. Wojtaszek was chairman until 2009, when he returned to his law practice. Questions are now swirling over whether he can keep his gig as head of the regional Off-Track Betting organization.

Ortt and Maziarz are both from North Tonawanda, and the Buffalo News reports that Ortt will face three charges of “offering a false instrument for filing”. Ortt testified before the grand jury on the eve of his surprise indictment, as did his wife, Meghan. Meghan Ortt was given immunity, and Senator Ortt waived immunity. The Niagara Gazette reports,

The Gazette confirmed Meghan Ortt’s service as a consultant to a pair of Niagara County companies are also involved in the investigation, including Lockport-based Regency Communications, a public relations firm established in 2011 by former Niagara County lawmaker and one-time aide to Maziarz, Glenn Aronow. The other company is Synor Marketing Co., a Lockport firm that has for years specialized in the production of campaign materials for candidates and political parties in Niagara County.

Both Aronow and Synor have also been subpoenaed in the Maziarz case.

Meghan Ortt, who received her associates degree in fine arts from Niagara County Community College and who also has a bachelor’s degree from Buffalo State College, was under retainer with both Synor Marketing and Regency Communications in the past.

In an ethics disclosure report filed with the state in 2014, Robert Ortt listed income in the form of consultation fees paid to his wife by Regency Communications in an amount described as more than $1,000 and less than $5,000.

Meghan Ortt is not believed to be a target of the investigation. Maziarz’s side has been silent, but Ortt has retained an Albany criminal defense lawyer and big-money crisis communication firm, which went out of its way to suggest that Ortt is the real victim because he’s a veteran, and that Attorney General Schneiderman is a Democrat. No joke.

One thing is clear: the only reason I am included in this is to make their case politically appealing. As multiple news organizations have documented, Eric Schneiderman has been obsessed with using his political office to persecute his political enemies and protect his political allies…We look forward to telling voters the truth about Eric Schneiderman and exposing him for the power hungry, political opportunist he is and I will fight this ridiculous charge.

It cost Ortt a lot of money — likely from his campaign account — to get that much deflection from high-priced PR people. But really, when you’re in a hole, stop digging. The Attorney General’s Public Integrity Unit doesn’t exist to blindly wage personal vendettas on Schneiderman’s behalf, and Ortt’s efforts to delegitimize this prosecution — which was presented to a grand jury before which Ortt himself testified — may work for Donald Trump, but sounds craven in this instance.

The Maziarz investigation commenced in 2014 over $140,000 in unitemized campaign spending, indicating that people had possibly been essentially embezzling the fund for personal use. Shortly after that commencement, Maziarz retired, and Ortt was elected to replace him, defeating Democrat Johnny Destino. In 2014, Destino assailed the Niagara County GOP for valuing “loyalty over competency”, citing a panoply of fiscal issues and mismanagement in Lockport and Niagara County.

New York’s campaign finance laws are lax, and enforcement is spotty. Manipulating the weaknesses in campaign finance requirements for political or personal gain has been a hallmark of the now-hibernating world of Steve Pigeon, and allegations of campaign finance irregularities should be taken seriously and pursued by law enforcement because they represent a breach of public trust — when a campaign treasurer files reports with the state they certify, under oath, that they’re true and accurate.

While Ortt tries to grasp and hurl back some of the shit smearing his fan, it will be interesting to find out what the specific charges and underlying alleged facts are, in order to ensure that our elected officials are not knowingly or intentionally filing false reports in order to hide some wrongdoing.

The charges unsealed in court stem from Ortt’s time as the mayor of North Tonawanda. Prosecutors allege Ortt’s wife was given a no-show job, being paid $21,500 between 2010 and 2014, in order to make up for a $5,000 reduction in his annual pay as mayor.

“No show jobs and secret payments are the lifeblood of public corruption,” Attorney General Eric Schneiderman said in a statement. “New Yorkers deserve full and honest disclosures by their elected officials-not the graft and shadowy payments uncovered by our investigation. These allegations represent a shameful breach of the public trust – and we will hold those responsible to account.”