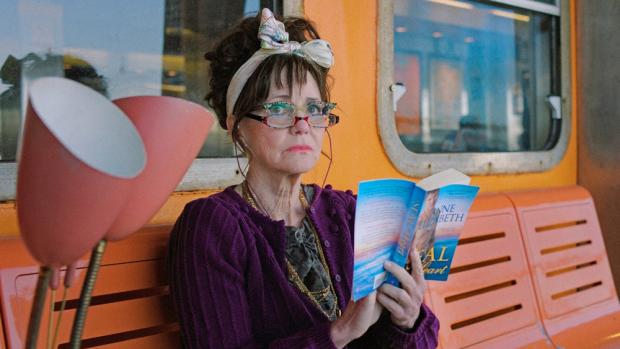 The highlight of a given day for Doris Miller (Sally Field) is when she finds a useful item in her neighbor’s trash. Catch the look on her face as she retrieves a 1950s lamp from the street on her way to work: It’s one of the few times you’ll see her happy in Hello, My Name Is Doris.

Though she probably wouldn’t use the word herself, Doris has been unhappy for a long, long time. She spent her adult life caring for her mother in the house they shared on Staten Island (the borough of New York City least likely ever to become hip). Now that Mom is dead, the 60ish Doris is left with a house cluttered with trash pickings, a wardrobe that can most kindly be described as casually matched, and nothing in particular to live for.

So when the good-looking 30-something stranger who engaged her in casual conversation on the elevator to her Manhattan workplace turns out to be a new co-worker, Doris is in love.

It’s been a long time since Sally Field has had any kind of a leading role, much less one that used her particular comic skills—probably 1991’s Soapdish. She does panicked befuddlement better than most any actress since the screwball era, and it’s a delight to see her back.

Hello, My Name Is Doris was co-written and directed by Michael Showalter, of the nameless troupe that was first seen in the MTV sketch comedy show The State, whose members have variously contributed to a lot of the edgier independent comedies of the past decade, including Role Models, Wet Hot American Summer, Reno 911, Children’s Hospital, and many others. As such, he was unlikely to grind out a standard feel-good comedy about a lost soul finding her way, though there was a possibility that Doris’s journey might have ended up being a trip that became uncomfortable or painful to view. Thankfully it avoids both extremes. As Doris pursues her impossible dream, with the help of an internet-savvy teen, she never becomes so pathetic that we want to turn away from watching her. She may initially be more pathetic than the feistier women of a certain age recently played by Lily Tomlin (Grandma) and Blythe Danner (I’ll See You in My Dreams), but her success at reshaping her life is no less pleasurable to watch.

Christopher Plummer stars as Zev Guttmann, 90 years old and living in a retirement home. He is beginning to suffer the effects of dementia. When his wife dies, he is contacted by another resident, Max (Martin Landau), who has a job for him. Both are survivors of Auschwitz, where many members of their families died. A guard who was responsible for many deaths escaped to the US under a false name. Though confined to a wheelchair, Max has used the internet to find him, or at least to narrow the search down to four possibilities. Zev’s job: Visit each of them, discover the correct man, and execute him.

Zev’s progress has a touch of Memento: His memory is fragile enough that he has to rely on explicit instructions and phone calls from Max. But he pursues it with a single-minded determination.

For awhile, Remember plays out like just the kind of potboiler it appears to be: you keep watching mostly because Plummer is the kind of actor who commands your attention. But the film isn’t what it initially seems to be, and some things that I thought were poor scripting turn out to be points in the full story that eventually develops. By the time it gets where it’s going, we’re left with a film of surprising power.

I wish I had something intelligent to say about Knight of Cups, the new film by Terrence Malick, comprising footage he shot five years ago concurrently with scenes for another film he’s editing. Even more plotless than his last film, To the Wonder, it is beautifully photographed and filled with beautiful music and beautiful people. To call it incomprehensible may be beside the point: I’m not sure that it is meant to be understood as much as viewed and felt. But then, it didn’t make me feel anything. Christian Bale plays a Hollywood screenwriter who wanders around Los Angeles and Las Vegas, in search of meaning in his past, present and future. (The title refers to a tarot card which signifies, depending on which way it is dealt, either change and opportunity, or fraud and obfuscation.) The images are not abstract, but the snippets of dialogue are whispered so that you have to strain to hear them, the editing filled with jump cuts, and the images generally captured with distorted lenses and perspectives. It might have some impact on a theater screen, but watching it on a home streaming link I found it impossible to keep my eyes on it enough to grapple for any kind of “meaning.” Those of you with more knowledge of the tarot (which provides what structure there is) or the medieval religious text The Pilgrim’s Progress (which is quoted) may fare better.