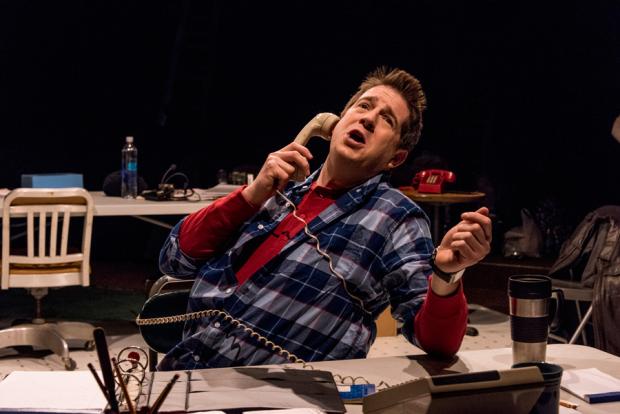 The frenetic Brian Mysliwy in the Irish Classical’s Fully Committed. Photo by Gene Witkowski
by
Douglas Levy
/ Mar. 23, 2016 2am EST

One-man shows are a special treat for theater-goers as they watch an actor use every ploy, talent, and theatrical convention to bring to life a character who by sheer energy and authenticity must carry a play on his shoulders for the entire length of the performance. For many such productions, like Tru and Mark Twain Tonight, the audience may already be familiar (or at least think they are) with the subject (in the above examples, Truman Capote and Samuel Clemens), who often addresses the audience directly. A very different take on this single actor trope is Fully Committed, currently on stage at Irish Classical Theatre Company through Sunday, April 3 at the Andrews Theatre.

Authored by Becky Mode (with Mark Setlock, who premiered the play in 2000) and directed by ICTC producing director Fortunato Pezzimenti, Fully Committed stars Brian Mysliwy as Sam, the harried, hapless taker of reservations (in restaurant lexicon this function apparently has no official title) at a trendy Manhattan eatery for which, on this particular day, it seems half of the borough’s population (nearly all in the social register) wants a table for dinner.

Mysliwy provides both sides of the conversation as he takes phone calls from a parade of irritating potential customers. They scream, cajole, intimidate, or sweet-talk their way to getting a table for that evening. Too often Sam explains that the restaurant is fully committed, a strange but strictly enforced euphemism for booked solid. In between, Sam must deal with the chef who has a penchant for sadism, a haughty maitre d’, his father, and his agent as he waits to hear if he got a call-back for a second audition. (Yes, Sam is also an aspiring actor.) Frantically juggling several phones and intercoms, Sam’s distress nearly drives him to the point of hysteria (which suggested another meaning for title of the play, as in psych center.)

But Sam is made of stronger stuff, and as animated by Mysliwy’s miraculously controlled dervish, he maintains his composure as he treats the most barbaric and insulting caller with the sangfroid of the optimal customer-service representative. In the dénouement, Sam turns the tables (pun intended) on just about everyone who has made his morning a living hell, to both his and their advantage.

There is a moral to this story: In our service economy, a cool head, good manners, playing by the rules, and taking advantage of an opportunity when offered is more than just its own reward. Mysliwy’s tour-de-force performance as reservation-taker par excellence, along with good son, supportive friend, and factotum extraordinaire amidst the zanies that run the restaurant, shows how remaining composed under pressure will pay off big-time in the end. And Sam can take some comfort in the thought that his job, whether taking reservations or—someday we hope—acting, cannot be outsourced to a call center in Mumbai.