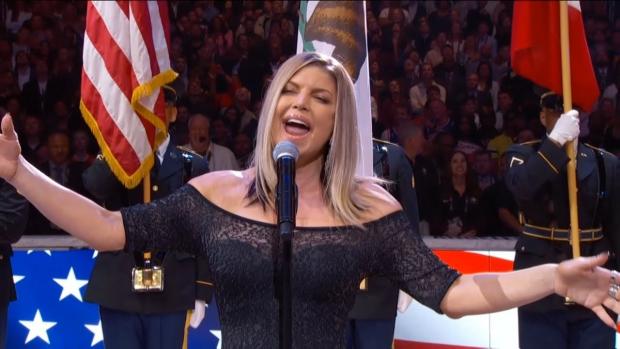 In NBA parlance, she got posterized by the song: A representative if not summative online review was “a hilariously s****y version.”

Fergie’s public response to a viral tide of slings and arrows—“I love my country and honestly tried my best,” and if you actually listen to Fergie’s performance, it’s not bad: even better than many others (a Desecration All-Star for many is Roseanne Barr, who perpetrated a still-echoing terrorist act on the hapless song in 1990).

But, to paraphrase from another politico-socio context, it’s the National Anthem, stupid: It’s a third rail, or a poisonous toad just waiting for someone to come along and touch it. Or it’s just a Rohrshach test, mostly revealing our zeitgeist’s neuroses.

Nevertheless, what’s truly stupid is the song’s appearance at sporting events, especially professional ones: Do other businesses drape themselves in the flag to such a martial, manipulative degree, with jet flyovers and flag displays (for which the US government bills leagues and teams)?

Imagine how mad loud the thunderdome of social media would resound if Starbucks played the national anthem when its stores opened every day? Or Walmart?

Although throughout the 19th century the song appeared frequently from military bands at public events, historians identify World Series Game 1 between the Boston Red Sox and Chicago Cubs Game on September 5, 1918, as the event at which “The Star Spangled Banner” began its serious path to canonization and secular controversy.

The US Navy Band, in attendance, struck up the song between innings; a player on the field turned to face the flag and saluted it; a small, somber, World War I-preoccupied crowd began singing along; and baseball noticed, as did Washington, and other sports.

Officially designated the US national anthem in 1931, “The Star Spangled Banner” has been in the sports air since—and has been continuously controversial, sparking vehement dissent from Day 1 over everything from showing proper “respect” to altering the song to reflect the home team.

The anthem is a complex semiotic signifier way, way too freighted to be a truly effective jingle for pro sports’ product. So ditch it.

The state-of-the-art marketers of American games are brilliant and mercenary enough to see this is really a “win-win” opportunity: Instead of continuing to costume a cut-throat, hyper-capitalist business (college sports included here) as a bulwark of patriotism and community, replace the Leni-Riefenstahl-esque anthem ritual with other songs; for example, ones that could be different every season, in the way that the fashion industry chooses a particular color to headline every design season.

Buffalo News pop music critic Jeff Miers has suggested that the anthem should be replaced with the Youngbloods 1967 hit “Get Together,” and imagines what an experience it would be to hear a stadium full of people singing, “Come on people now, smile on your brother, everybody get together, try to love one another right now.” Think what that could do for beer sales.

Come on, people. Now: It’s time. The best way to respect the National Anthem is not to put it in the hands of anyone besides Marvin Gaye, or in service to a profit-and-loss statement.

So play ball, after we all hear Happy (cue Pharrell Williams), and dance.

Ed Taylor is a Buffalo teacher, novelist, and poet.