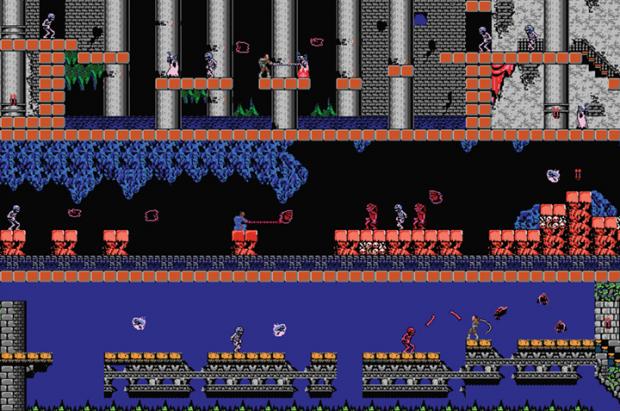 An anonymous designer called Mind Romes has created a pretty unique mash up of classic video gaming and classic hip hop. The project, Chronslevania, is a combination of the 1985 Nintendo game Castlevania, and Dr. Dre’s 1999 album, Chronic 2001. It started with a remix of “Still D.R.E.” from 2001. At first it was going to be, maybe, a Star Wars remix, but then a classic video gaming session turned into inspiration.

“My boy and I were playing Castlevania on the original NES and the music on it was so hot,” says artist, Mind Romes, who chooses to remain anonymous for reasons we’ll get into later.

From there it bloomed into the idea to make a whole album of 8 bit Dr Dre remixes. Eventually the full idea revealed itself: not only to remix the album, but to remix the game too.

The result is Chronslevania, a fully playable—and even challenging—completely unique reimagining of Castlevania. The main character, Simon Belmont, is replaced with a sprite of Dr. Dre, who uses his whip to decimate enemies. When enemies are defeated, they, of course, relinquish some of their power, in this case not in the form of hearts as in the original game, but in the form of tiny marijuana leaves, which the player must collect. Cut scenes feature an 8 bit Snoop Dogg guiding the player along, with quotes from 2001 overlaid on the screen. At the end of each level, the token you’re awarded with is an MPC 3000 sampler. All of this happens to the tune of Mind Romes’ 2001/Castelvania mash up remixes, titled Chronic 1985—an eight track EP. Beating levels reveal more of the game’s soundtrack.

This is not just the original Castlevania with these modifications, however. The level designs are completely new. So if you’ve already mastered the art of jumping from that falling platform in level four and whipping that skeleton enemy in mid-air, you’re going to have to reprogram that muscle memory if you want to play this version.

Not so surprisingly, the final version is awesome. Everything about it feels like a classic Nintendo game, from the movement of the characters, to the look and feel of the levels.

Mind Romes started working on this project over a year ago, before the NES Classic Mini—a self contained NES systems with a cache of games including the original Castlevania—was announced, and before Netflix announced it’s new television series based on the game. With the popularity of the game surging again (this week also marked the 20th anniversary of another popular Castlevania title; Castlevania: Symphony of the Night, which was the first version of the game released on the original Playstation), the timing for the release of Mind Romes’ game is simultaneously perfect, and maybe a little too perfect. The artist is worried about the legal implications of sampling both a popular hip hop album and a classic video game that’s having a moment right now. For these reasons, Mind Romes chooses to remain anonymous, at least until the upcoming show at Big Orbit Gallery this Saturday. The show, titled Chronic 1985 — Chronslevania Release Party, will be a display of the game in full as well as artwork and music related to the project. It’s dubbed “a mashup project with global reach, made right here in Buffalo. “ Visitors to the event, which is free to enter, will have the opportunity to play the game on an oversized screen at maximum volume, and will also receive a free download of the game.

The evolution of the Chronslevania project happened in waves. Surprisingly, prior to this project the artist had virtually no video game programming experience at all. His experience is in video and graphic design and in crafting hip hop beats—and that’s where this all started. When he began remixing the Castlevania soundtrack, he showed it to a buddy.

“My friend was like geeking out about it, so we just kept making beats off of the Nintendo. We would get together and sample, playing as much of the game as we could, waiting on a ledge or something for the beat to loop.”

He’d take the Castlevania music, which he captured with an ASR 10—an old 12 bit sampler—save the samples to a floppy disk, and then manipulate them. He’d slow it down to hip hop beat speed, add some drums, mix it, and generally beef it up.

Remixing the songs was not the hard part.

“For some of the songs I had to stretch the a cappellas and warp them and align them and everything, but for the most part, shit just kind of worked out,” he says.

The next step was the hard part, though he didn’t know quite yet the extent of the next step yet. At first, the idea was simply to make a music video to accompany the remixes.

“Once I wrote the remixes, I figured, I’ve got to have some sort of music video to promote it. Before I finished the project, I started animating a video. I took all of the sprites from Castlevania—I got a screen capture card and would take shit off it. I would record the video from the NES, blow it up as much as I could, put it into photoshop and remake the characters in pixels.”

So, he made a music video, complete with a cut-scene shout out to Super Mario Bros. He wrapped it up. The album was done, the music video was done. But the project didn’t feel complete.

“I had all of the characters, all the animations, everything was mapped out. I’d rebuilt levels, all of the tiles all of the components of the levels. So I was like, why don’t I just make a game?”

He had no idea how to make a game, however, so he started making some phone calls.

“I went on LinkedIn and searched ‘Buffalo game design’ just to see if someone would pop up, and Buffalo Game Space came up.”

He went up there and he learned that there are different programs to use to make a game. One is called Construct 2. So he bought the program and taught himself to use it. He also learned that making a video game requires doing a lot of math.

His intent, at first, was to take the existing game and replace the characters with his custom Dr. Dre sprites. Complications arose and he abandoned that idea and decided to build the game from scratch.

His version of the game is itself a full remix. In fact, he actually made some aspects of the game a little smoother—in his version some of the mechanics, like walking up stairs, which was a little off in the original, are smoothed out.

“It looks like the same game. It’s the same floor tiles you’re walking on but they’re arranged in a totally different way. The first level is very reminiscent of the first level, but after that it’s all game on. Everything is different.”

The result is essentially an interactive album video game. Playing the game on a lap top computer is one thing, but playing it on a big screen projection is a completely different experience.

At the event this weekend, Mind Romes will have several playing stations set up, including one big screen projection, where visitors can play the game for themselves. There’ll be some 8 bit artwork from the game and other special decorations. To experience the game in full, head over to Big Orbit Gallery this Saturday, March 25.