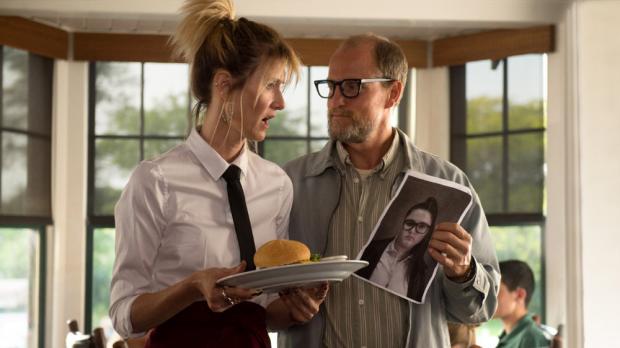 If people glorying in the arrival of spring are harshing your grump, it’s a good week to celebrate your inner curmudgeon at the movies, with two new features starring Woody Harrelson and Shirley MacLaine as characters at war against pretty much everyone else.

Harrelson has the title role of Wilson. Whether that’s his first or last name we never know, and no one asks. That Wilson lives alone, in an apartment over a karate studio, is immediately apparent when we see his furnishings, which are not the type tolerated by spouses.

It’s not that Wilson doesn’t yearn for human companionship. But though he thinks of himself as a “people person,” he really doesn’t have a clue how to make connections with anyone other than his pet dog. He’s the guy who will sit right next to you on a bus or a café, even though every other seat is empty. (The film’s poster provides a funny example of this.) It doesn’t occur to him that a statement like “Looks aren’t that important to me” is the last thing a woman wants to hear on a first date. And try as he might to start conversations, he just can’t stop himself from expressing his true feelings when people answer his questions, usually in observations like “Don’t you ever shut up?”

Episodically paced, the movie follows the apparently unemployed Wilson as, despairing of making new friends, he tries to renew acquaintances with old ones. Most notable of these are Laura Dern as a lost love who is even more damaged than he is: It’s a brilliant pairing.

But it’s Harrelson’s movie, giving him chances to shift between the shy, almost simple-minded perspective of bartender Woody from Cheers to the near-psychotics he has played in many of his film roles. While the story takes him to some dark places, Clowes and director Craig Johnson (The Skeleton Twins) keep the film from becoming too grim. That may leave it slightly without the courage of its convictions by the time it’s over, but that’s just as well. For a guy like this, a little realism goes a long way.

The Last Word initially looks like it’s going to be Shirley MacLaine’s shot at the kind of role that every actress of a certain age seems to get: Think of Lily Tomlin in Grandma, Blythe Danner in I’ll See You in My Dreams, Sally Field in Hello, My Name Is Doris, or Susan Sarandon in The Meddler. It is to the extent that it’s a starring vehicle for an actress past the age when Hollywood generally has anything to do for her (she turns 83 next month), but it manages to avoid being too formulaic.

She plays Harriet, former owner of an advertising agency now retired in comfortable circumstances. She lives alone with only a small staff to berate, and it’s clear that they wouldn’t be around if they weren’t being paid. She doesn’t have much to do with her time other than drink red wine and stare off into the middle distance, and what appears to be a suicide attempt may only be a way to get taken to a hospital where she can heap her scorn on someone other than her gardener and cook.

One morning, reading an obituary in the local newspaper, she is struck by the writer’s skill with adjectives and euphemisms. To read that a woman she knew “left an indelible mark on everyone she met” certainly sounds nicer than what she knows to be the truth, that the woman had syphilis. So Harriet calls on some old connections to meet the writer, Anne (Amanda Seyfried), and sets about arranging for her own obituary. And when everyone she has ever known has nothing but bad things to say about her, she enlists Anne’s aid in piling up some achievement that will look good in print. Kind of like a high school senior in a hurry to beef up a college application.

At heart, The Last Word is substantially less misanthropic than Wilson, and we put up with Harriet’s bad manners secure in the understanding that her true colors will be allowed to shine before we leave the theater. There are some missteps along the way, primarily in the person of a foul-mouthed but adorable nine-year-old urchin to act as a foil for Harriet, though the filmmakers have the sense to minimize her after shoehorning her into the film. Any regular filmgoers who are still smarting at what they feel was the ending left off of Pedro Almodovar’s current Julieta may be able to make up for it here with a mother-daughter reunion after decades apart that actually makes it onto the screen.