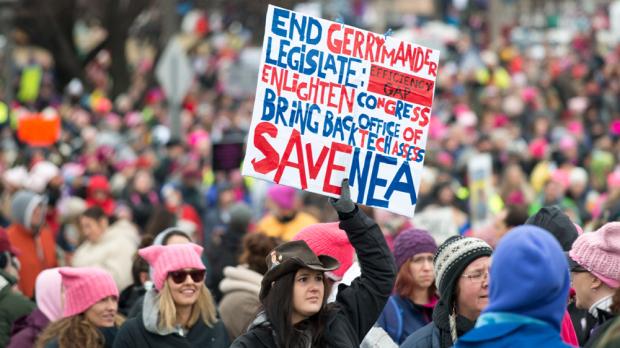 George Will signs on

The wealthy bloviator George Will has joined Donald Trump in his plan to abolish the National Endowment for the Arts. In an article posted on The Patriot Post blog, Will argues that money for the NEA is wasted because a) nobody really knows what art is, b) he is still offended by Andres Serrano’s 1987 photograph, Immersion (called in the popular press “Piss Christ”), c) half of NEA’s grants go to major arts organizations which don’t need any money because they cater to rich people, and, by implication, d) the other half is wasted on poor people who don’t need or can’t understand or can’t make art.

The Serrano photo was 30 years ago. Republicans wanting to do in the NEA and the NEH (each of which currently gets $144 million from the federal government) refer to it again and again and again. The photo depicts a plastic crucifix immersed in Serrano’s urine. Will and the other Republicans opposed to funding NEA (and the National Endowment for there Humanities and the Corporation for Public Broadcasting) have an issue or fascination with urine. NEA hadn’t even funded Serrano’s photographic work: The photograph won an award from the Southeastern Center for the Contemporary Arts; the center was the recipient of an NEA grant; and therefore, NEA supported dipping Christ in piss. That is, so far as I can tell, the logic. It’s a reach.

“NEA’s effects are regressive,” writes Will, “funding programs that are, as Paul Ryan’s House Budget Committee said, ‘generally enjoyed by people of higher income levels, making them a wealth transfer from poorer to wealthier.’ A frequently cited study purporting to prove otherwise was meretricious: It stressed income levels of ZIP codes where NEA-funded institutions are, inferring that institutions located in low-income areas are serving low-income people.”

Bizarre to see a supporter of Trump’s budget plan arguing that funding art transfers wealth from poorer to richer people. There are many other parts of that plan where that bogus charge could be more usefully levied.

The study to which Will refers was not at all “meretricious.” He has an excellent vocabulary, but he’s lying. In Buffalo, NEA supports, on occasion, the Albright-Knox Art Gallery, the Burchfield Penny Art Center, and the Buffalo Philharmonic. It also funds Just Buffalo, CEPA, and Squeaky Wheel. This year’s largest NEA grant in this area went to Just Buffalo, which probably serves the widest variety of community people. Just Buffalo has, for example, picked up writing programs that were cut from the Buffalo schools’ budget.

Will is carrying on about $144 million out of the entire federal budget. What is that compared to Trump’s $26 billion wall on our southern border? It’s chump change compared to what the United Kingdom and France budget for the arts and culture ($556 million and $3.7 billion, respectively).

Been there, done that

The Republican attack on NEA (and NEH and CPB) goes back to the Reagan administration. In the 1990s, to placate the attackers, NEA abolished grants to individual artists. It now funds organizations and allocates 40 percent of its budget to the states. With rare exceptions, NEH has always funded through organizations.

I thought to argue Will’s statement opposing public support for the arts, but I remembered I had done exactly that 37 years ago in a letter published in the New York Times on September 15, 1980. That was in response to an attack on US support of the arts by British novelist Kingsley Amis:

Kingsley Amis’s attack on government support for the arts (Op-Ed Aug 31) comes from the comfortable perspective of a man talented and fortunate enough to have made himself a great deal of money work in an art form that itself requires very little money: at the barest, the working novelist needs only a pad with a lot of pages (available in most large cities for $1) and a ballpoint pen.

But the filmmaker, sculptor, or composer with no support by a wealthy patron or a large organization (such as NBC or MGM) cannot, in the modern economy, manage to reach the point where the work of his or her talent is available for ether public judging Mr. Amis says is far preferable to the judging of the critics and grant panels.

Who but the very rich could afford to make a documentary film about a subject ignored by the networks were it not for grant support? Who but the very rich could afford to rent a hall or symphony for performance of a piece of music not quite accessible or fashionable enough to fit a modern symphony’s performance schedule in a season when it is necessary to keep the audience happy and comfortable enough to buy those season tickets and make those nice contributions? Poets and novelist are the most portable and economical of artists, but that doesn’t legitimize this studied ignorance of the other arts.

Finally, Mr. Amis elects to ignore history: he cites some classical composers as examples of artists who did perfectly well without governmental support. That is nonsense. Bach, Beethoven and Mozart, and many others. were all heavily dependent on continuing handouts from rich patrons, from the church, from the nobility. The major modern difference Is that the groups giving out the money now have a modicum of peer-group representation on the decision-making boards.

Mr. Amis’s elitism notwithstanding, things are getting better, not worse, for both the artist and the public that benefits from the artist’s work.

Thus far, I’ve been writing about microcosm: a small item in a very large budget. It is synecdoche for the whole thing.

Donald Trump’s first budget mirrors the man: It lacks compassion, empathy and forethought; it ignores science; it suggests no awareness that the United States is part of an interdependent global community.

Trump’s budget invests a huge amount of money in a wall that that will not accomplish Trump’s purpose. It increases spending for Homeland Security, Defense, and Veterans Affairs. And it slashes funding for just about everything else: education, environment, medical research. It reduces funding for the Coast Guard (which keeps out more illegal drugs and illegal immigrants than the wall ever will) and the State Department (through which we administer foreign aid and negotiate just about everything with other governments). It cuts K-12 school programs, antipoverty programs, environmental programs, public transportation, Meals on Wheels, public broadcasting, national parks. The budget even cuts $5.8 billion from the National Institutes of Health: goodbye cancer research and diabetes research.

I used to think Republican attempts to abolish NEA, NEH, and CPB were grounded in an attempt to rid the country of voices that could not be controlled or bought, and that Republican enthusiasm for military budgets was grounded in the fact that a lot of people and corporations made a huge amount of money from those budgets, which came around in political contributions, above and below the table.

And with Trump, I first wrote it off to the fact that his aesthetic sensibility died at birth. You’ve seen photos of his condo: schlocky gilt everywhere, even the crapper, and the only visible art are paintings of himself. It screams “EXPENSIVE!” and it is tackier than anything most people could imagine. There is no record of him ever personally contributing to any arts organization, attending any arts event. His speeches give no indication that he has ever read a novel, a poem, a history book.

Where did the conservatives go?

I could go on, but you get the point.

If only a handful of Republicans in the United States Senate get it, Trump’s predation might be slowed enough so we can get through the next 45 months without seeing the dream set forth at the end of the 18th century be transformed into a living nightmare in the second decade of the 21st.

Pete Seeger told me years ago that during the time he was blacklisted for his political beliefs, he often got to give concerts only because conservatives would say things like, “We don’t agree with him, but he’s got a right to be heard.” That kind of conservative, Pete said, “had principles. We didn’t agree about a lot of things. But on things like basic rights, we did.”

Are there any conservatives like that left? Are they willing to stand up and be counted?