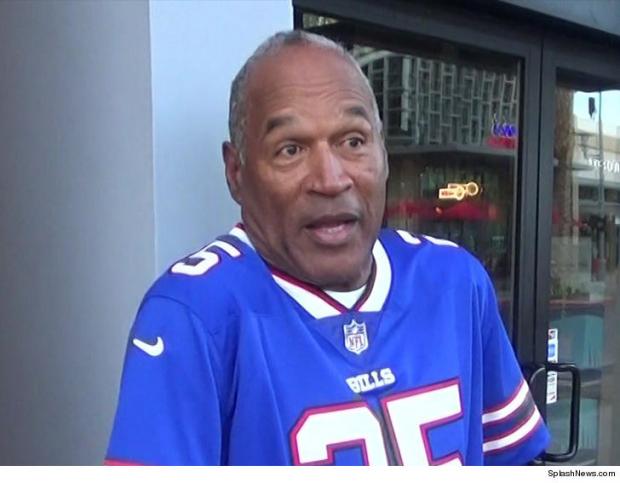 OJ Simpson is not a kindly old man. He is not Mr. Rogers. Considering Simpson has a long record of violent physical abuse against his ex-wife and he was found guilty by a civil court of brutally murdering her and her friend, I should not have to clarify these points. Unfortunately a flurry of newspaper articles and tweets from the Buffalo News this weekend has attempted to sanitize Simpon’s legacy. BN sports writer Tim Graham:

“He hunched as he moved around the house, smoothly but with a shuffle more than a glide. Reading glasses perched on his salt-and-pepper head. He wore a black button-up sweater over a white golf shirt, black slacks, black Nike sneakers. He looked like Mr. Rogers, not the running back who once scored 23 touchdowns in a season, not one of the most infamous men on the planet. But that baritone voice, that incandescent smile. Yes, this was O.J. Simpson.”

Here Graham finds a way to gloss over Simpson’s history of brutal violence to show us Simpson as just a regular guy. He does not open with his history of violence against women or with double murder. Instead he introduces a Simpson that is like any other retiree. And that is the problem.

The New York Times recently came under fire for publishing an article about a white nationalist and Nazi sympathizer from Ohio that focused more on his averageness than his extremism. Critics rightly pointed out that talking about his wedding and his favorite TV shows- focusing on the ways the Nazi is just like the rest of us instead of the ways that he is profoundly different- served to sanitize and humanize the man, turning our gaze away from his vile actions and beliefs. But it is those vile actions that matter most. The only reason the Times reported a story about this average person is because he is a Nazi. The same goes for Simpson.

The Buffalo News wanted the Simpson interview because Simpson is a violent man who abused his ex-wife and likely brutally murdered her and her friend. Simpson is infamous. That is the reason the interview was viewed as a “get.” Yet BN reporter Graham fails to appropriately unpack the role that Simpson’s violence played in changing the course of his career and destroying his football legacy.

The Society of Professional Journalists (SPJ) has made clear the ethical requirements for media reports. From the SPJ Code of Ethics:

“Be vigilant and courageous about holding those with power accountable. Give voice to the voiceless.”

In the BN interview Graham is neither vigilant nor courageous in his coverage of Simpson’s legacy of violence and abuse. Instead he attempts to soften his legacy, focusing only on his football career. Make no mistake this was Graham’s choice. In fact it was Graham who set the terms of the Simpson interview. Graham explained to WGRZ’s Maryalice Demler that he assured Simpson he would ask only about football. This desperate comprise did not come after hours of negotiations. It was Graham’s self-described “initial offer.”

While Graham made the rounds discussing how he was able to get the interview with O. J. Simpson he never adequately addressed the much more important question: why was the interview worth getting? Why should Simpson be given the attention? Why allow him the opportunity to revel in the glory of an ancient football career? Why let him believe that his actions on the field were more significant than his actions off? Most importantly, why insult and belittle the millions of survivors of domestic violence and stalking in this country by privileging the voice of an abuser over the needs and concerns of the abused?

Graham claims his Simpson interview offers “another layer to the onion” to help us “understand Simpson as a person.” But why should BN offer the front page of the Sunday morning edition to help readers learn more about a violent man’s reflections on football? Who at the Buffalo News made the decision that a sympathetic interview with Simpson was worthy of the prime readership position? At first Graham tells Demler if readers are offended they can choose not to read the article and “cast it aside.” However moments later he explains to Demler that because he asked Simpson about more than football no one should be offended. It seems clear Graham thinks that asking about Donald Trump and Colin Kaepernick somehow fulfills his ethical responsibility. Graham is wrong.

In the multiple articles and dozens of tweets coming from the Buffalo News about Simpson, there was no mention of the impact of domestic violence on our society, and BN never provided a list of resources for women, men and children living with domestic violence or abuse. BN could have featured stories with survivors of domestic and family violence, highlighting their struggles, their courage and the helpers available in our community. These stories could have run alongside the Simpson interview, offering an important counterpoint to the glorification of Simpson’s football career. The opportunity was there to provide education, awareness and resources. The Buffalo News failed to take it.

While BN and Graham spent the weekend patting themselves on the back for the “get” of a puff piece interview with a violent and abusive man, the epidemic of domestic violence continued destroy lives across the country. In the United States an average of three women per day are murdered by a current or former intimate partner (Violence Policy Center, 2017). In over half of all female homicides the perpetrator is a husband or boyfriend or ex-husband or boyfriend. As we deal with the aftermath of yet another mass shooting it is important to understand that in 20% of domestic violence homicides the victim is someone other than the intimate partner: a friend, a family member, a law enforcement officer or a bystander (CDC, 2017). Over 50% of mass shootings are domestic violence incidents and in four out of five of the largest mass shootings the killer had a documented history of domestic violence or stalking (Las Vegas, Orlando, Virigina Tech and Texas) ((Everytown for Gun Safety, 2017). In the case of the Parkland school shooting, the killer had previously been expelled for dating violence.

It is reasonable to argue that domestic violence is the greatest threat to public safety in this country.

“Avoid pandering to lurid curiosity, even if others do.”

Ignorant to the epidemic of domestic violence in this country and to the connection between DV and mass shootings, and tone deaf to the grassroots social movements #MeToo and #TimesUp, the BN Simpson articles represent the lowest form of tabloid journalism. They offer nothing meaningful to the reader or to the larger community the paper serves. They serve only lurid curiosity. The worst example is the article titled, “Muhammad Ali, O.J. Simpson and a whole bunch of hookers.”

It is hard to imagine that an editorial staff could be so oblivious as to not recognize the shocking level of sexism and classism embedded within this story. It’s about a rich man who violently abuses his wife driving around in a fancy car harassing poor women on the street. This is sexism and classism 101. Add the outdated and inappropriate use of the term “hookers” in the article title (the correct term is sex workers) and it becomes apparent that the Buffalo News is in imminent need of both a news ombudsman and extensive training on male privilege, sexism, classism and violence against women.

I’d like to ask the editors and writers at the Buffalo News to stop and think for a moment about Harvey Weinstein. How will the news media cover his story in 10 or 20 years? Will the media gloss over the 50 rapes that Weinstein committed to “peel back the onion” on his personal story? Will the Buffalo News offer to publish a sympathetic front page Sunday morning feature about Weinstein’s movie successes? Weinstein isn’t that different from O. J. Simpson, after all…

There are dozens of famous athletes who have done and continue to do amazing things for our country and our community. Their legacies of service, sportsmanship and sacrifice are worthy of front page news coverage. O. J. Simpson is not one of them. He lost his right to a football legacy the first time he violently beat his wife. The lives of women are more important than rushing yards. It’s time for the Buffalo News to recognize that.

If you or someone you know needs help: