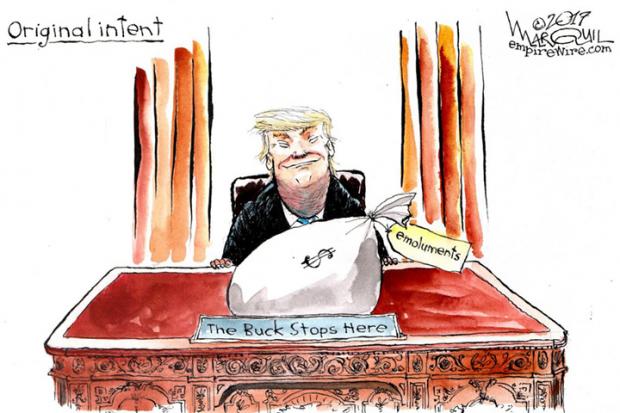 Candidate Trump was pretty hard on China, terming the country a “currency manipulator,” which, arguably, it appears to be. He promised that on day one of his presidency, he’d officially label the country as such, which would be his first step toward placing a 45 percent import tariff on Chinese goods. Once in office, Trump took his rhetoric up a notch and shocked the diplomatic world by also threatening to end the United State’s One China policy, which was instated by Richard Nixon as a condition of normalizing relationships between the US and China.

The policy is rhetorical, viewing China and Taiwan as one nation. On the ground, however, the policy is essentially meaningless, with the US still conducting trade with and supplying military aid to Taiwan. For China, however, who still views Taiwan as a breakaway province, this rhetorical concession is the foundation beneath our friendship—and it’s also the third rail running through our relationship. Mess with it and we rewind the clock to 1970.

Trump apologists in the Republican Party were quick to walk back his threats to blow up the One China policy, explaining that their leader was just doing what he does best, throwing out an opening salvo and maneuvering into position for negotiating and deal-making—his signature skill. Our trade relations with China, born in the Nixon administration and amped up and refined under the free-trading Ronald Reagan’s tutelage, are, according to the amnesiac Trump, a “terrible deal” cooked up by “worst president in history,” Barack Obama. Trump’s apocalyptic moves to release military and economic chaos between the US and China, we’re supposed to believe, actually belied skillful bargaining to pressure China to walk back “Obama’s” terrible, terrible deal. An unbelievably bad deal.

But then, after breathing fire in China’s direction for months, that odd little mouth that seems to crawl all over Trump’s face uncharacteristically and unexpectedly ceased its Sinophobic fury. When it opened again, the negotiator-in-chief was quietly reversing course, recognizing and committing to support the One China policy while seeming to forget about his 45 percent tariff promise.

Trump made his move. He came to the chessboard with a machete but China didn’t lay down their king. After bringing US-China relations to the brink of destruction, where was the deal? What did we finally get from China that was worth this risk? If the deal Trump struck with China is not self-evident, it’s because our question—“What did we get from China?”—is flawed. We get nothing from China. Trump, however, between his anti-China bloviating and his ultimate retreat, seems to have gotten quite a bit for himself. We were never anything more than pawns in this game.

It unfolds like this. Trump claimed in 2015 that the trademark value of the Trump name was worth $3.2 billion, roughly the same as Fanta or Chipotle. This represents about one third of his claimed net worth. That number could have been significantly higher if Dong Wei, a Chinese citizen, didn’t oddly also own specific business rights to the Trump name in China, the world’s second-largest and fastest-growing economy. Trump had spent much of the past 10 years fighting Dong over the name in Chinese courts, to no avail. Like Trump, China also seems to know how to negotiate.

After Trump reversed his position and promised Chinese President Xi Jinping that he would support the One China policy and recognize Taiwan as a province of China, Chinese courts, in a surprise February ruling, also reversed course and granted Trump, and not Dong, a 10-year trademark for exclusive rights to use the Trump name on construction projects. As a one-party state without the checks and balances common to Western democracies, the Chinese government appears to have a strong influence over its courts and their rulings, making this unexpected decision more of a government policy statement than what we would recognize as a legal deliberation. Coming on the heels of Trump’s reversal on the One China policy, this decision appears to be a quid pro quo settlement of a debt, only on a nation-to-person (or nation-to-family) rather than nation-to-nation basis.

Trump is a good deal-maker, at least when it comes to making deals to enrich himself and his family. At the time of his unexpected Chinese court victory last month, the Associated Press reported that Trump also had 49 other trademark applications pending in China. In early March, however, Chinese officials issued a wholesale preliminary approval for 38 of these Trump requests, covering potential businesses from security services to hotels and golf resorts. The Guardian cites a Hong Kong-based intellectual property consultant, Dan Plane, who remarked that he never saw so many applications approved so expeditiously in China, saying, “It’s weird.” Plane speculated that officials from the ruling Communist Party were monitoring these dealings, surmising that the decisions were “just way over your average trademark examiner’s pay grade.”

As with the court ruling in favor of Trump over Dong, these quick and favorable decisions appear to be part of the same quid pro quo deal where Trump risked our national security to negotiate a personal business deal to enrich himself and his family. This is exactly what the emoluments clause of the US Constitution was designed to prohibit.

In addition to these new trademarks, and the other 11 that are still pending, the Trump family also holds another 77 currently registered Chinese trademarks. These trademarks are scheduled to come up for renewal during Trump’s scheduled presidency, giving China more currency to bid on US foreign policy deals. Meanwhile, a plethora of Chinese companies with no relation to Trump, such as luxury toilet manufacturer, Shenzhen Trump Industrial Company, continue to use the Trump name on their branded products, leaving the door open for years of Trump family litigation in Chinese courts.

Business negotiations with the Chinese government aren’t limited to Trump’s nuclear family, but appear to also enrich his extended kinship network. The family of Trump’s son-in-law and senior presidential adviser, Jared Kushner, just secured a sweetheart deal from a Chinese company which the US government had previously suspected with having close ties to the Chinese government. In a deal that Bloomberg Business Week’s sources term as unusually favorable for the Kushner family, the Kushners get out from what they describe as a problematic real estate investment and receive over $400 million from the Chinese company, the Anbang Insurance Group.

Also benefiting from this sudden influx of Chinese cash, according to Bloomberg, is the Vornado Realty Trust, which partnered with the Kushners and others on the same troubled real estate investment. They’re scheduled to receive a 1,000 percent return on their investment in the office portion of the property and a 100 percent return on the retail portion. Bloomberg reports that Vornado is President Trump’s partner in his two highest-valued properties. Vornado’s CEO, Steve Roth, is an infrastructure investment adviser in the Trump administration. To move forward, the China Kushner Vornado deal will need federal approval, which you can bank on it receiving.

Yes, we are in uncharted territory. But there’s really no great mystery behind Trump’s policy-making decisions, especially when they align with his family’s business needs. The Trump corporate footprint extends all over the world. So many excellent countries. So many tremendous trademarks.