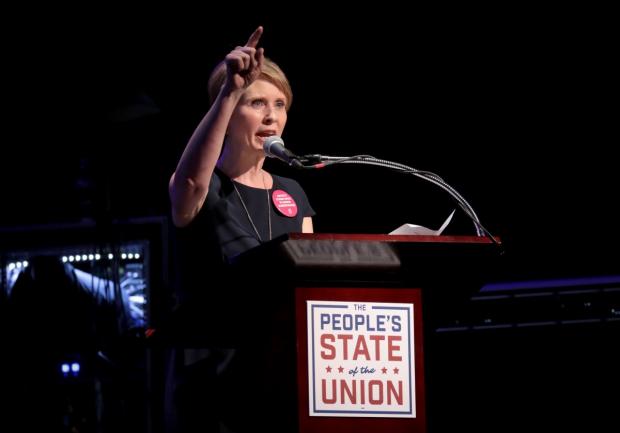 Cynthia Nixon: The actor turned education activist announced her long-anticipated candidacy for governor on Monday. A political neophyte, Nixon’s name recognition presents a formidable progressive roadblock in Cuomo’s path to a third term. Zephyr Teachout’s bootstrap challenge to Cuomo four years ago earned an outsized response in the primary, and that was before Bernie Sanders and Donald Trump took turns galvanizing the more progressive wing of New York Democrats. Teachout will continue to be a thorn in Cuomo’s side, serving as Nixon’s campaign treasurer. “Half the kids in our upstate cities live below the poverty line,” Nixon’s initial campaign ad points out. “How did we let this happen? I love New York. I’ve never wanted to live anywhere else. But something has to change.”

Catholic Diocese of Buffalo: Since we’ve put them “down” for two straight weeks, we’ll give them an “up” for finally releasing the names of local priests who faced allegations of sexual abuse. There are, however, already signs that this list isn’t comprehensive enough: Two priests who were charged with crimes and another who was removed from a different diocese, but who had all served in Buffalo, were not included in the list. Hat tip to the Buffalo News for its continued reporting.

Buffalo literature: Just Buffalo Literary Center has announced they are seeking proposals for a work of public art outside downtown’s Central Library to honor the finest poet Buffalo has yet produced: Lucille Clifton. The piece has a budget of $35,000, and artists can review material for application here: justbuffalo.org/community-projects/public-art-rfps/.

Buffalo News editorial board: We ought to make the News editorial board a fixture on thumbs-down. This past week, they argued to “abolish” Veterans’ Hospitals and raise fares for the NFTA, an agency that is chronically underfunded and directly cut out from revenue by tax breaks awarded by the Erie County Industrial Development Agency to development projects, many of which are located downtown and include parking ramps that only further destabilize NFTA ridership.

The City of Buffalo Department of Permits and Inspections, for engaging in a farce of an effort to evade a Freedom of Information Law request from community activist Dan Sack regarding developer Chason Affinity’s project plans for the corner of Elmwood and Forest. On March 6, Sack visited the Permits and Inspections office in Buffalo’s City Hall and asked to see Chason Affinity’s drawings for the project. Chason Affinity’s Planning Board-approved plan calls for 40 or so condominiums, in addition to retail space; because the developer has not yet filed necessary paperwork with the state Attorney General to get approval for the sale of condominiums, Sack wanted to see the plans, to ascertain if perchance the developer intended to switch from condominiums to apartments marketed to students—the sort of project Chason Affinity has done elsewhere.

Sack was told the plans were in “code review” and thus unavailable to the public, and that anyway no one knew where they were. So Sack gamely filed a formal FOIL request to see the plans, right then and there. He followed up with phone messages for Permits and Inspections commissioner Jim Comerford and the department’s assistant director, Lou Petrucci. Meanwhile, Sack discovered on the city’s handy new online database that two work permits for the project had been issued in February—one for $25 million worth of work—somewhat contradicting the idea that the plans were still in “code review.”

Five business days elapsed without the city acknowledging receipt of Sack’s FOIL request in writing, as required by state law. But Petrucci called on March 13, reiterated that the plans were still under review, and told Sack he couldn’t share them because of potential copyright and security issues.

The next day, Sack returned to City Hall to ask for a written response to his FOIL request. There he encountered Petrucci, who said once again that he could not share the plans until they’d been approved; they were merely “working documents.” He added that, in any case, Sack had failed to indicate on his FOIL request form why he wanted to see the floor plans. (There is no legal requirement, nor is there space provided in the city’s standard FOIL request form, to explain why a document is being requested.) Sack, with FOIL request form in hand, asked Petrucci to show him where it said he needed to give a reason; Petrucci refused, as he stepped into an elevator, saying that he wasn’t wearing his glasses. The elevator door closed.

For good measure, and while he was there, Sack filed a FOIL request to see the work permits issued by the city. The clock is still ticking on that one. We’ll keep you posted.