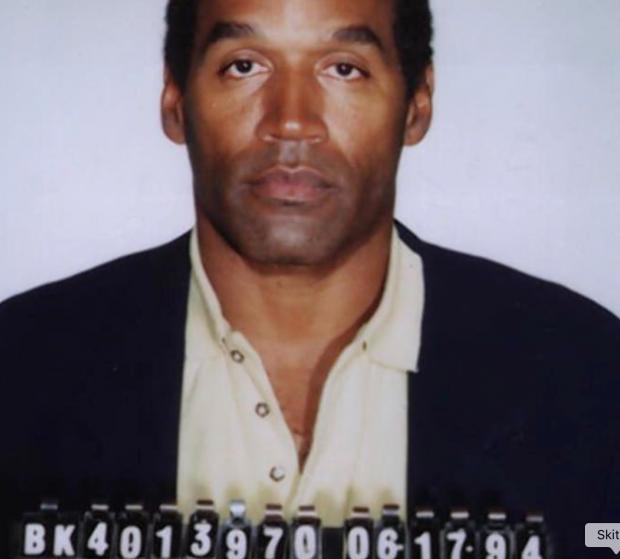 Too bad Aaron Hernandez committed suicide, because we could have found out whether he also resembled “Mr. Rogers” as he sat in prison for murder.

How is Oscar Pistorius doing?

These are all questions with which the male sports writers at the Buffalo News can busy themselves in the wake of its abominable “everything but the murders” interview with disgraced felon OJ Simpson.

In 1994, OJ Simpson murdered Ron Goldman and his ex-wife, Nicole Brown. He was famously acquitted of murder; i.e., a jury did not find him guilty of the crime of murder beyond a reasonable doubt. The Goldman family, however, brought a civil lawsuit against Simpson, and a jury there found by a preponderance of the evidence that Simpson was liable for the homicides — the “wrongful death” — of Goldman and Brown. He did it, and you don’t need his faux-hypothetical take on it. He did it, and the Goldmans were awarded a judgment of $33.5 million, which they’re still trying to collect.

Nevertheless, if you watch that recently released decade-old interview Simpson granted Judith Regan, it’s clear not only that he did it, but that he was someone who had to have total control over Brown’s life. He had abused her physically and psychologically before he all-but-decapitated her, and murdered her and Goldman in a jealous rage, and he came armed and ready to commit the deed.

Tim Graham is a writer who possesses extraordinary abilities to tell a story, but this interview is a betrayal. It is nothing more than the Buffalo News — and Mr. Graham — being used by an unrepentant killer to rehabilitate his image after a 10-year long penitentiary stay for kidnapping and armed robbery.

The story has accomplished one of its goals — clicks and eyeballs. But it’s a story we don’t need. I don’t care about OJ Simpson’s thoughts on football; I don’t care about how his retirement is going, or how much he loves Summerlin, NV. I don’t care about OJ Simpson’s visits with his kids, or his football career, or his thoughts about football today, or CTE. The story itself would not even exist had Graham not agreed beforehand not to bring up the bloodthirsty 1994 murders of Goldman and Brown. Literally nothing else matters — ‘why did you almost slice your ex-wife’s head off, and why did you murder her friend’ is the only question with which I’m interested in OJ Simpson being confronted.

Are there no women in editorial positions at the News who would have been able to quash this paean to OJ’s thoughts and life, omitting the fact that he’s a homicidal monster? I know the people at the News, and I have to assume that this came up, but did no one think it would be smart to offer an explanation to readers as to why they would allow themselves to be complicit in some sort of OJ rehabilitation PR stunt?

Especially, if you think about it for a half-second, in this age of #MeToo, how irresponsible it is of the Buffalo News to give OJ Simpson this much ink to talk about his gated community, his golf course, how “spectacular” he looked years ago, his football statistics, his thoughts on Ralph Wilson, his prison fantasy football leagues, his lamentations about life on the inside, his thoughts about Donald Trump, his opinion about Colin Kaepernick, his dishwasher, his leaky ceiling, or his thermostat.

Literally every syllable of that story was aid and comfort to an unrepentant killer. A man who abused the mother of his children.

I’m not a football fan, so far be it from me to tell the Bills or the Hall of Fame what to do with him, but as a consumer of news I can say fuck OJ Simpson, and never, ever let a media outlet give you the chance to like him or forgive him.

Maybe the News can find out what Mo Hassan thinks of the 17/18 Sabres season.