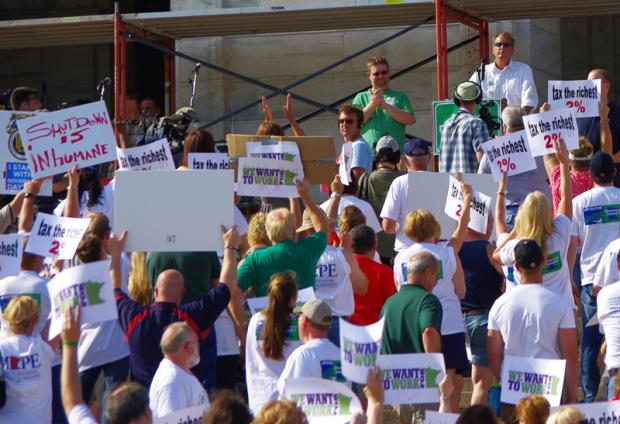 The 2010 election represented a victory of the ultra right wing of the Republican Party and the Koch Brothers over the working class. The immediate thrust of their victory was centered in Wisconsin where the newly-elected Governor Walker spearheaded the national Right to Work (RTW) effort by attacking the public sector unions in that state. This marked a heightened offensive and heralded the beginning of RTW campaigns all over the country.

RTW is the name given to the legislative/legal activity aimed at destroying the primary organizations of the working people: the trade unions. In essence, RTW legalizes the right of individuals to opt out of their union organization in favor of non-membership, yet allows the individual all the wages and benefits that exist because of a collective bargaining agreement. The individual would not be a member or have any obligation to provide any financial support to the union. Such an arrangement destroys the collective role of the union and paves the way for splits in the workplace between members and non members. It makes a shambles of the union structure and secures a free ride for workers who opt out. It is a preliminary move that eventually would allow the employer to withdraw recognition of the union as the sole representative organization of the workers.

So why does this matter in a time when critics on the right are asking: “What good does a union do anyhow?” The answer to this is simple: Without organization the labor movement is at the mercy of the wealthy. Individual workers have few rights separate from those provided by a collective bargaining agreement, and without the union there is no collective bargaining agreement.

However, this question cannot be reduced to this one simple point. There are those who suggest the “unions are part of the establishment” or a “major reason for the economic decline” or “stand in the way of economic progress,” etc. All these opinions converge and stand united in order to strip the working class of leadership and any semblance of centralized and independent authority.

The RTW campaign is a legislative attack on the organizations that have formed the bedrock of the working class’s ability to defend itself. The Koch brothers and Fox News know exactly what they doing when they seek to undermine our organizations. In order to kill us they are seeking to cut off our heads. Once leaderless the race to the bottom will have little organized opposition.

So, how can we respond to this fundamental threat? First, we must remind ourselves that it is the interests of all working people, not just those belonging to a union, but all who labor for an employer, that the struggle for economic and social justice must have organization to meet common goals. The union movement provides structure and its mission is to defend the economic interests of the working people. Real defense doesn’t consist of slogans and speeches alone. Real defense first and foremost consists of engaging in the struggle for higher wages, real benefits, health and safety concerns, and against the scourge of racial, sexual and national discrimination.

The unions when working optimally can organize and lead this struggle. If RTW is unchecked it will destroy the unions. We must fight RTW as if our very existence is at stake…because it is.