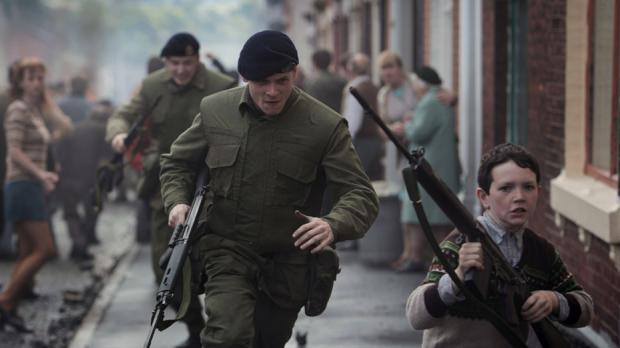 The title of ’71, now playing at the Eastern Hills Cinema, refers to the year in which it takes place. The setting is Belfast, and the escalation of British armed forces in the city has not yet peaked; it’s about a year before the date known as Bloody Sunday.

You can get by without knowing that, or even with having any knowledge of the conflict (if that’s possible); an early scene sketches out all you need to know. Most of the film takes place on a single night as a young British soldier, barely out of the orphanage where his younger brother still lives, tries to stay alive after he is separated from his unit during a riot.

It’s closer to a horror story than a political one, though you might also look at it as a kind of political horror story. The sides may seen clearly drawn, but there are factions within factions, and operatives whose allegiances aren’t clear. Maybe the only thing most of them share is that they all want to kill Private Gary Hook (Jack O’Connell, last seen as Louis Zamperini in Unbroken.)

Debuting director Yann Demange concocts a few memorable set pieces—the initial street riot that rises as quickly and implacably as a tsunami; the aftermath of a pub bombing—but his real accomplishment is the seamlessness of the entire piece. Shooting mostly with handheld cameras and a star who has only a few lines of dialogue, he compels us like a nightmare we can neither understand nor awaken from. The thick accents and murky lighting will be an impediment to some viewers, but the overall effect will get to you regardless.

“You want to be a gunman, Sean?” says one character to another in ’71. This provides an irresistible opportunity to segue to a discussion of another new film, The Gunman, starring Sean Penn. It’s not a segue I can make any sense out of, but I won’t let that stop me.

After all, it’s not as if there’s a lot else to make sense out of in this brainless action film. Penn plays a Special Forces veteran who at the outset is working in the Congo for a mining company, doing such dirty work as assassinating any politicians who try to get in the way of the rape of their country’s wealth. This is a secret to his girlfriend, Annie (Jasmine Trinca), a doctor working with the country’s poor. A high-level killing forces him into hiding for eight years, during which he apparently has a change of heart. But when he emerges, he finds that he is now the target of killers.

Penn is not known for starring in frivolous films, and he is credited as one of the scripters. An opening info montage bemoans the horrors visited on countries like Congo by international plunderers who encourage political turmoil as a way of diffusing any efforts against them. That sounds like the kind of thing Penn might want to make a film about. But it’s not the subject of the movie at all. Directed by Pierre Morel (Taken), it’s a lot of running and shooting—mostly shooting—that wastes the talents of a lot of good actors, including Mark Rylance, Ray Winstone, Idris Elba and especially Javier Bardem as a cowardly drunk. Mostly though you look at Penn, flexing his overly-gym trained torso in numerous shirtless scenes, and think, what led him to this point of desperation? Can he really be that jealous of Liam Neeson?