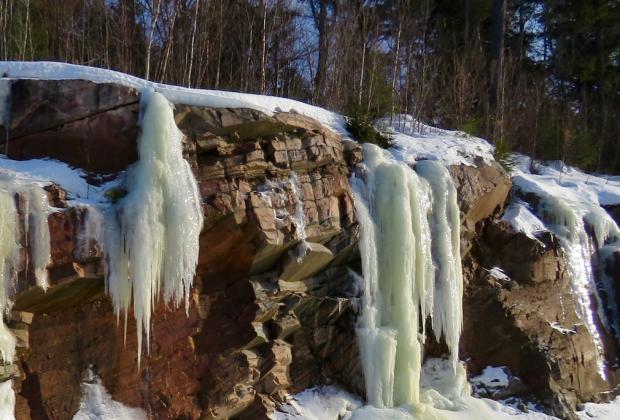 It has been an unusual winter, to say the least.  Weatherwise our region has experienced 60 F plus degrees in January, and much much colder as we have come into March.  Last weekend I traveled with my family to Algonquin Provincial Park about four hours north of Toronto. The park is a near Tiaga, dottted with spruce forests, bogs, lakes, and on this weekend can be described as  wind-swept and frozen.  The air temperature stayed near 0 F. The skies were clear and the nightime sky was completely awesome. It is rare to see a “dark sky” meaning unpolluted by human made light, but here it was. The constant wind nearly brought us to our knees on a couple of treks across the frozen and beautiful place.

Algonquin is also the home of some of North America’s most rare species of wildlife, including the Red Wolf. This wolf, only recently discovered to be a Red Wolf rather that a Gray Wolf, is listed by the International Union’s for the Conservation of Nature’s Red List as “Critically Endangered”.

While we did not see any of the wolve’s there were sightings near where we were, and we looked. We found fresh tracks. But you know, it was too cold for any real investigations.

There was also evidence of Moose, Pine Marten, and a lot of magnificent birds.  We found flocks of Evening Grosbeaks, Pine Siskens, a few friendly Ravens, and some magnificent and friendly Blue Jays.  Which reminds me, baseball season is just around the corner. Bisons (Toronto Blue Jays Triple A affiliate) opening day is APRIL 4 against Scranton Wilkes-Barre. Get your tickets!

Todays video brings you up close to our recent late winter trip to Algonquin. Did I mention how cold it was? I swear I could feel Hudson Bay and the Arctic on this trip!