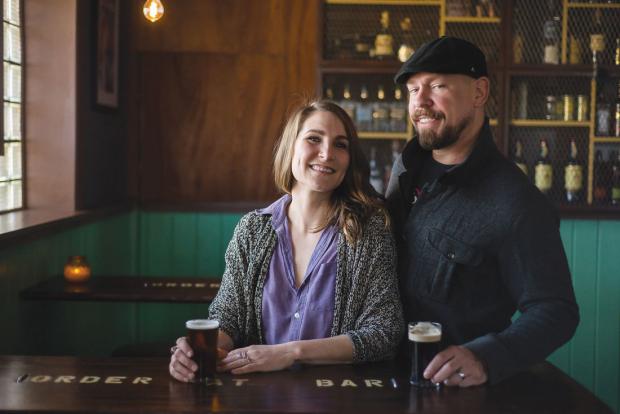 This past weekend, I had the pleasure of checking out Ballyhoo, a craft cocktail pub nestled on the edges of the First Ward and Cobblestone District at Michigan and South Park Avenues—the site once occupied by the Malamute Tavern.

Ballyhoo’s owner, Tim Stevens, is a Buffalo native who rose to craft cocktail fame in San Diego, where he was named one of the city’s top 20 bartenders by San Diego Magazine. But amid that personal success, he also co-founded the San Diego Bartenders Guild, demonstrating a commitment to “the scene” that helps explain his return to Western New York.

“I’m a boomerang, let’s be honest,” Stevens admitted in a recent interview (listen below). He took notice of what he calls the “tidal wave of creativity” fueling our region’s resurging bar and restaurant culture—a movement on which he aims to capitalize, and to which he hopes to contribute.

“A rising tide lifts all boats,” he said.

The intersection at Michigan and South Park feels as if it’s on the precipice of transition. At one end is an extreme close-up of the General Mills factory and surrounding industrial megaliths that tower over our waterfront, a constant reminder of the city’s past. At the other end is the new Buffalo Creek Casino just across the street, and Harborcenter just a half-mile in the distance. It’s an interesting harmony of decay and resurgence—the kind for which Buffalo is becoming increasingly famous.

The bar offers its own off-street parking lot, and a strong Sunday-evening scent of Cheerios that accompanied us to the front door. The façade—not much changed from that of Malamute before it—retains the old-school charm of a union hall from Buffalo’s industrial heyday.

Upon entering, the look and feel inside the cozy bar is at once both new and familiar, both modest and sophisticated, both Buffalo and new to Buffalo. With the entire city celebrating St. Patrick’s Day further uptown along the parade route, my companion and I were able to belly up to the center of the bar for front row seats.

While the bar is famous for its cocktails, my companion and I are beer drinkers. Ballyhoo doesn’t disappoint. The beer offering is relatively small—12 rotating taps, a handful of cans—but there’s something for everyone: Rolling Rock and PBR at one end of the spectrum, Chillwave Double IPA at the other. The current tap rotation is sprinkled with St. Patty’s-themed brews, and I fell in line with an Irish Red Ale by Hamburg Brewing Co.

I’d heard about Ballyhoo’s sausages before I made the trip. Being very much a “meat and potatoes” guy, I was anxious to see what all the fuss was about, but tempered my excitement by wondering how impressive something as elemental as a sausage could actually be.

I never could’ve imagined the sheer bliss that accompanied biting into these mouth-watering reinventions of the classic ballpark staple. My companion and I split a “TJ Dawg” (chorizo pork and bacon sausage topped with pico, crema, and avocado) and a “Steak House” (seasoned beef sausage topped with cream spinach, garlic, and parmesan). Both were absolutely incredible. Each is basically a hearty, gourmet, housemade sausage topped with deliciously fresh, veggie-based toppings and sauces. Perhaps most impressive is the way in which this generous portion—even ripped in half as my companion and I ate them—stayed self-contained and didn’t make a mess.

There are only five sausages to choose from ($8 each), and I imagine all are incredible. Rounding out the food menu are a few different sides (salad, slaw, pasta and soup, each for $4), and a single dessert option: a homemade ice-cream sandwich. We each had one, and we each loved it.

Although we didn’t try them, I’d be remiss if I didn’t mention Ballyhoo’s “Jam Sessions,” cocktails that substitute English jam in place of bottled syrup ($9 each); and “Carbon-a-Teas,” cocktails mixed with tea syrups ($8 each). If cocktails are your thing and you’ve yet to try these, do yourself a favor.

The market for Ballyhoo’s craft cocktails might not be as robust as that of, say, craft beer—and Stevens, recognizing this, has crafted a drink menu that offers something for everyone. That being said, his unique style is not something he hopes to keep on the shelf.

Indeed, Stevens aims to inspire patrons, to be “imparting knowledge instead of spinning a napkin in front of them and saying, ‘What can I get you?’ When you do that, you’ve surrendered. You have to light them up.”