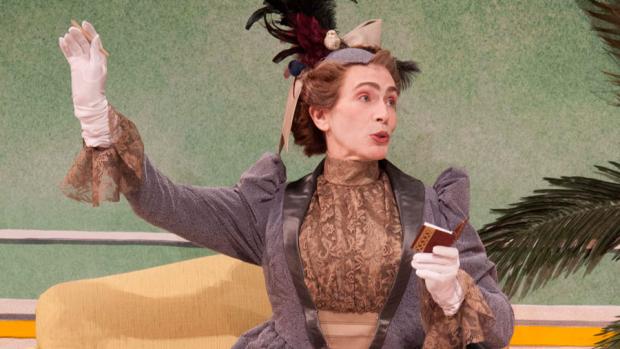 The traditional knock on critics is that they themselves couldn’t do the stuff they so readily pronounce on when others try their hand at it. This is usually very true. Not in the case of Anthony Chase, however, who writes and talks voluminously as a critic of actors and acting and teaches theater at Buffalo State College. Chase currently is performing—as the imperious Lady Bracknell—in the Buffalo State Theater Department and Casting Hall production of Oscar Wilde’s perennial delight The Importance of Being Earnest. Amid workmanlike performances by the rest of the cast comprised entirely of theater students at the college, Chase holds the thing together. Timing, demeanor, stage presence. All the verities of acting methodolgy are in play for him.

This theatrical masterpiece is like a stand-up comedy routine—though for an ensemble rather than lone comedian—of one-liners about Victorian-era upper-class social conventions. It’s a wonder so many of them are still funny. That they still get laughs attests to the deeper levels of subject matter here. For while contemporary society has long ago shed most of the Victorian-era conventions, whatever the society, conventions are part of the package.

Anthony Chase as Lady Bracknell and Daniel Torres as Algernon in The Importance of Being Earnest.

Moreover, the attack on conventions goes deeper than just social conventions. The most substantial undermining and overturning of conventions—the core play action—more relates to theatrical conventions. Mistaken identities, alias identities—broaching the matter of what’s in a name—foundlings re-found, unsuspected blood affinities revealed. The hoariest of dramatic tropes are cobbled together here in an improbably intricate plot by characters who seem to have nothing better to do with themselves than indulge in such theatrical tomfoolery. (The play is a kind of Comedy of Errors in which the errors seem imposed more by the characters themselves than the playwright.) And a general rescue in the end—that is, of the characters we care about, the young lover types, who tend to undermine their amorous endeavors by the complexity of their subterfuges—by that most credible palliative of all problems, the discovery of previously unrevealed legacy fortunes. Money as the universal social lubricant.

Not all the jokes get a laugh. Some maybe due to occasional actor garble or mumble, or timing miscalculations or imprecisions that should get ironed out in subsequent performances. But some of the lines or situations you wonder if they ever were funny. Such as the interplay between Cecily (Molly Bader) and Gwendolyn (Deonna Dolac) at a time when they don’t like each other but are taking tea together in Cecily’s garden, and she asks Gwendolyn if she wants cake or bread and butter, and Gwendolyn says bread and butter, and Cecily deliberately gives her cake. Maddening.

The interplay between the male principals, Jack (Jesse Tiebor) and Algernon (Daniel Torres), is by and large more engaging—the boys are into more complicated machinations and deceptions, inventing and portraying alter egos—than their female counterparts, who basically just want to get married, as long as to someone—anyone—named Earnest.

Nor has the full list of Victorian social conventions quite disappeared. Though hopefully disappearing. Director Donn Youngstrom in a program note reminds us of Wilde’s legal difficulties in the matter of his homosexuality in a time when homosexual activity was illegal. “The astute social historian,” he says, “may detect a certain amount of gay code in the play, inserted by Wilde to delight his friends and fellow travelers.” This can usefully be augmented in production. Lady Bracknell as a drag role is a starter.

The play continues March 17 through 20, 8pm, in Upton Hall on the Buffalo State campus.