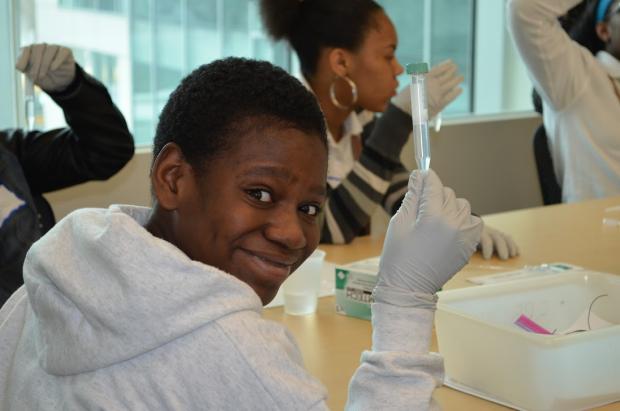 You’ve probably heard of the Human Genome Project, but did you know that the project essentially began in Buffalo?

Flash back to April 14, 2003 in Buffalo where after nearly eight years of studying, more than 2,000 researchers working, and over $1 billion spent—the ultimate goal had finally been achieved: scientists had completed the Human Genome Project which compiled a list of the three billion letters of genetic code that make up what they considered to be a sort of every person’s DNA.

Eric D. Green, director of the National Human Genome Research Institute, commented upon the completion of study saying: “The idea all along was not to sequence a person’s genome, but to develop a resource. It would be the sequence of a hypothetical genome, a reference genome. It was meant to represent humanity.”

Just over 11 years later, after the study’s completion announcement went viral and global, on March 17, 2014, the University at Buffalo and Roswell Park Cancer Institute (RPCI) welcomed over 400 seventh and eighth graders from Buffalo Public Schools (BPS) to participate in Genome Day during Science Week.

While visiting the institute, Buffalo Public School students divided into small groups to visit UB’s New York State Center of Excellence in Bioinformatics and Life Sciences (CBLS), where graduate students and post-doctorates from UB and RPCI lead them through a series of activities that promote genomic and bioinformatics literacy.

“The goal is to inspire and encourage students about STEM career opportunities,” said Norma Nowak, PhD, executive director of CBLS.

Students while visiting the institute were able to:

“Genome Day is a terrific opportunity for UB and RPCI to engage Buffalo middle school students in creative, fun, academic experiences that introduce them to the power and possibilities of science,” said Cartwright. “Our goal is to show them that science is an important gateway to STEM opportunities in college and in their future careers.”

Genome Day is a partnership between the UB, SUNY Buffalo State, Erie Community College, the State University of New York (SUNY) and Roswell Park with the City of Buffalo and Buffalo Public Schools as part of STEM Experiences and the second annual Science Week.