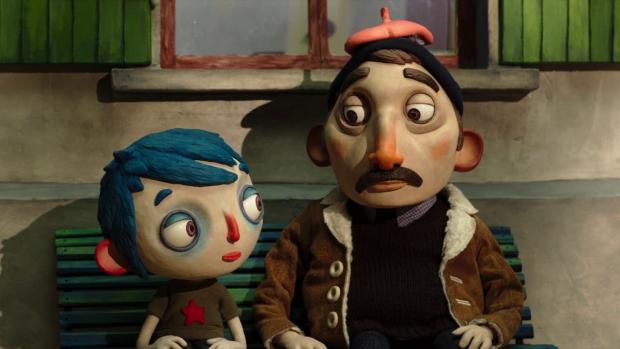 When the Academy Awards instituted a new category in the early 2000s for Best Animated Feature, it was widely understood to be a way of throwing some statues to the Walt Disney company, which made piles of money but generally wasn’t eligible for many awards outside of the Best Song category. And while it’s true that the award tends to go to American studio product, the nomination process has served to bring into the spotlight some valuable work from international or independent animators that would otherwise be cast into the ghetto of children’s TV, films that don’t rely entirely on armies of computer technicians to achieve their effect.

Two movies that got such a publicity bump this years were The Red Turtle, the first Studio Ghibli feature made by a non-Japanese director, which should show up at a local theater in the next few weeks, and, from France, My Life as a Zucchini, a stop-animated film from France, which opens this weekend at the Dipson Amherst.

Neither of these is necessarily what you would call children’s programming, though in at least the latter case that’s the audience to which it is being pitched. Zucchini opens with a scene that might be a bit much for some younger kids. A nine-year-old boy plays alone in the attic of a house, using his drunken mother’s empty beer cans for building blocks. When she comes to punish him for being too noisy, he accidentally kills her.

From there, the boy is taken by a caring policeman to a group home for other children from troubled backgrounds. His name is Icare, but he insists on keeping the nickname his mother gave him—Courgette, French for “Zucchini.”

Of the half-dozen other kids living there, his is not necessarily the grimmest story. The movie is based on a popular young adults book published in France, which is presumably where it gets its insistence on addressing life’s difficulties but not wallowing in them. There’s some talk among the boys of what used to be covered by the euphemism “the birds and bees,” and while the kids aren’t exactly rich in clear details, the discussion is enough that parents may have to be ready to answer some questions.

Still, for the most part all the unpleasantries in My Life as a Zucchini (the title presumably refers to Lasse Hallström’s My Life as a Dog, one of the great live action films about childhood) take place in the past. Zucchini is initially bullied, but makes friends with the boy quickly enough, as he does with the rest of the kids. The staff is caring and helpful, though not often seen: at times it plays like Peanuts in an orphanage. Zucchini is visited by Raymond, the police officer who brought him here. And he has his first young crush on Camille, the home’s newest arrival.

Running barely longer than an hour, My Life as a Zucchini doesn’t go into any great depth in terms of either story or emotion. That’s disappointing, as we would like to spend a little more time with these kids who win us over so easily. The character designs are in the best tradition of animation that understands that realism is best left to celluloid: when you can do anything you want, you should go ahead and do so. The stop-motion figures are appealing and a little silly, always interesting to look at. And there is a subdued but lovely score by Sophie Hunger that sounds a bit like Toots Thielmans.

There’s a happy ending, though mixed with a twinge of sadness, but don’t run out of the theater when the credits start to roll: a few minutes later, the film’s creators provide an animated version of the audition by Gaspard Schlatter, the boy who plays Zucchini, which you’ll want to see.

It is being distributed in the US by GKIDS, which stands for “Guerrilla Kids International Distribution Syndicate,” a small company with excellent taste in acquiring unusual animated films from around the world. On their slate are the Studio Ghibli movies, Boy and the World, The Secret of Kells, The Prophet, Sita Sings the Blues, and any number of others. A name to watch out for.