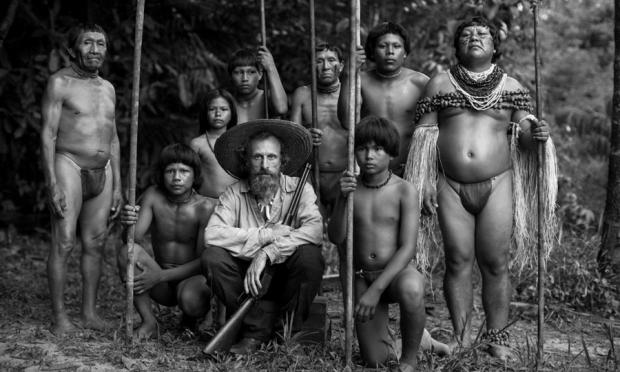 The first thing that strikes you about the Amazonian rainforest in Embrace of the Serpent is the colors: There aren’t any. The film is in back and white. You don’t expect that in a jungle film, at least in one not starring Johnny Weissmuller. As far as the movies are concerned, jungles and Technicolor go together like prog rock and a quadraphonic sound system.

Odd as it may initially seem, this choice by Colombian writer-director Ciro Guerra succeeds brilliantly. It helps that cinematographer David Gallego understands B&W photography, using high contrast and deep blacks. As the film’s protagonists take to the river for a journey, they seem to be on a sea of oil, endlessly unknowable and unforgiving. The surrounding vegetation, undifferentiated by shades of green, becomes like a fibrous wall.

But this is not a story about the jungle as a place of horror. Embrace of the Serpent, a nominee for Best Foreign Language film at this year’s Oscars, was inspired by the travel journeys of two explorers who visited the Amazon: the German Theodor Koch-Grunberg in 1909, and in 1940 the American Richard Evans Schultes. Both of them provided some of the few records we have of various tribes of people who existed for untold centuries until they were wiped out by the arrival of rubber plantations.

The protagonist of the film is Karamakate, a native shaman and the last survivor of his tribe. He serves as guide to both men, who in this fictionalized version are looking for a mystic plant known to have both healing and hallucinogenic properties. (Karamakate is played as a young man by Nilbio Torres, and as an old man by Antonio Bolívar.) In both cases he serves against his better judgment, blaming the white man for the despoliation of his land he knows for ends he doesn’t understand.

The two trips are intercut in ways that comment on each other. Most striking are the visits to a church settlement, in the early story run as an orphanage by monks who beat any trace of “paganism” out of their charges, and in the latter by those children, now grown and in control.

Embrace of the Serpent (the title refers to both a native creation myth and the image of the Amazon river winding through the landscape) evokes moments from other famous jungle films—Aguirre the Wrath of God, Fitzcarraldo, The Mission, Apocalypse Now. When he does so, it’s usually with irony, or in the interest of standing a cliché on its head. The general theme of the tragic loss of undervalued civilizations to Western progress may not be new, but Guerra’s brilliantly visualized fable is wholly original.

Can you say “fjord” without snickering? I never can—it’s just an inherently funny word, as Monty Python knew. At least it used to be until the Norwegian disaster movie The Wave. Like last year’s San Andreas, it is built on a real premise: because fjords are narrow bodies of water cut by glaciers into mountainous areas, rockslides from those mountains can cause substantial tsunamis. The film opens for photos taken after one of them in 1905, which was 40 meters in height. Another, in 1936, was 70 meters high. That’s about ⅔ the height of Buffalo’s City Hall.

The hero of The Wave is Kristian (Kristoffer Joner, also in The Revenant, presumably cast here for his impressively furrowed brow). He is one of a team of geologists who monitor the Åkerneset mountain near the tourist town of Geiranger. Because a large rockslide here is inevitable, they intend to have three days warning of it. But Kristian discovers evidence that the town has much less time than that, and when the rocks hit the water, there will be ten minutes before the tsunami hits.

Movies like this come in three parts: the set-up, the disaster, and the aftermath. The Wave differs from something like San Andreas in its smaller scope: the disaster is more graspable, and the limited size of the human story makes it more relatable. (In a Roland Emmerich disaster movie like 2012, so many lives are lost that you become numb to them.) It’s a satisfying thriller for those who don’t mind subtitles mixed in with the CGI effects. You will never laugh at a fjord again.

Hard to believe it’s been 13 years since Bad Santa invented a new comedy genre of innocent archetypes going rude, crude, and lewd. Since then there’s been Bad Teacher, Bad Words, and Bad Grandpa, to name only the hits. And now there’s one that might as well have been titled Bad Olympic Gymnast, though they went with The Bronze.

Melissa Rauch of The Big Bang Theory scripted (with her husband Winston) and stars as Hope Annabelle Greggory, a small town Ohio girl raised by her doting father (Gary Cole) to be an Olympic gymnast. She won a bronze medal partly by impressing the judges with her fortitude: performing after a bad landing on her ankle, exacerbating an injury that ends her career. Twelve years later she’s still in dad’s house, living on her reputation. How obnoxious is she? She doesn’t actually kill anyone, but that’s about the best that can be said for her. Her behavior is funny for awhile, but the script has a bad case of “too much is never enough,” especially when the formula requires that the character reform for some kind of a happy ending. In its favor, The Bronze has a gymnastic sex scene that has to be seen to be believed (I’d love to know how it got by with just an “R” rating). But generally its humor built on the premise that if one f-bomb is funny, 20 of them in a row are 20 times funnier. (If you agree with that, by all means stick around for the song under the end credits: you’ll bust a gut.)

If you’ve ever seen a film by Věra Chytilová, it was undoubtedly Daisies, the anarchic 1966 comedy that made her a star of the Czech New Wave. But while her contemporaries Miloš Forman and Jiří Menzel went on the some degree of international fame, Chytilová struggled to maintain working in her home country both before and after Soviet rule. Though she made 17 features prior to her death in 2014, almost none of them were shown outside Czechoslovakia.

Her back catalogue has finally started to get some international distribution, which is how the Kaleidotropes film series is able to screen her 1970 feature Fruit of Paradise. A loose retelling of the story of Adam and Eve, it opens with several abstract sequences before settling into a series of sketches in which Eva (Jitka Novákova) is pursued by the devil (you can tell from his red suit, even if the jacket and pants are mismatched) at a spa where she is vacationing with her indolent husband. Proudly and audaciously unconventional, the film’s questioning of social and sexual oppression led to Chytilová being banned from working by the Soviet government for the following seven years. It will be shown next Wednesday (March 23) at Squeaky Wheel; doors open at 6:30pm.