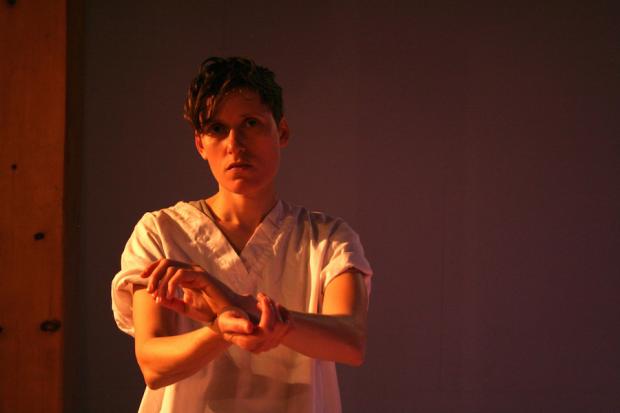 Art is often a way for the artist to stay sane. An example is the new play, Mariposa & The Saint, which will be coming to Buffalo on Friday, March 20 for its first performance outside New York City. The play was created collaboratively between Sara (Mariposa) Fonseca, a woman in prison in California, and New York performance artist Julia Steele Allen.

Allen met Mariposa, whom she describes as a “striking and fiercely intelligent” woman, in 2006, while doing prisoner advocacy work in Northern California, and has been corresponding with her ever since. In 2012, Mariposa was put into a “security housing unit,” a form of solitary confinement, initially for a term of 15 months—although, as happens frequently to prisoners in solitary, the term got extended and Mariposa is still there. She needed a project by which to avoid the severe damage to people’s minds and souls that often happens when they are in solitary for extended periods.

Allen said, “What if we write a play?” And so they did, based on Mariposa’s letters. The process was not easy. Letters often took more than a month to get in or out of the prison, as they are all read and scrutinized by prison staff. Mariposa had never seen a play, so Allen sent her examples to read. When a first draft emerged, complete with stage directions, Mariposa would say, “This is what should happen next,” and Allen would write that into the script. The process of writing the play became part of the events portrayed in the play, and thus the play becomes reflexive.

Who is the saint in the title? A graphic artist who assisted in creating the play crafted an image based on a photo of Mariposa, incorporating a halo and having something of the quality of an Eastern Orthodox icon. Nonetheless the saint, while spiritual, is not Christian. The saint came into existence as an alter ego to sit in the cell with Mariposa: someone to talk with, someone to bounce ideas off of, to offer advice, direction, and companionship. The saint is in effect Mariposa’s best side, the person she aspires to be—and also a part of Mariposa.

Allen is a wide-ranging artist who has written award-winning plays and is currently working on a documentary film. Much of the time she tours with the queer-country band, My Gay Banjo. She is also a longtime community organizer and activist who worked for nearly 10 years on educational justice issues in the South Bronx.

Mariposa & the Saint is being presented by the local group of the Campaign for Alternatives to Isolated Confinement, which seeks to curtail the use of solitary confinement in New York State. CAIC reports that the state has almost 4,000 prisoners in solitary, often kept there for years, and including youth and mentally ill prisoners. Five-sixths of the time, people are sent to solitary for non-violent, often trivial violations of prison rules. CAIC is working to pass legislation to address these issues.