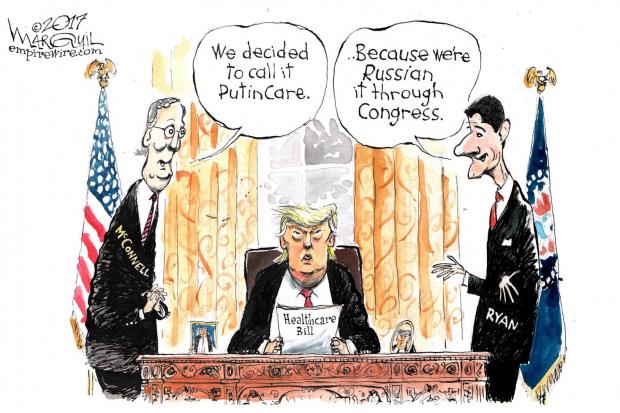 We have a president of the United States who promised to undo the social platforms that help people survive, to undo the environmental programs that help the planet survive, and to undo the international relationships that help us as a nation survive in a complex, ever-changing, world.

He has, thus far, kept all those promises. He has appointed a cabinet, every member of which is dedicated to destroying the past decade’s achievements in his or her realm. His head of the Department of Education loathes public education. His head of the Department of Justice has a history of racism. His secretary of state is in deep hiding. His secretary of the interior wants to turn Indian lands over to pipeline developers and thinks global warming is a liberal fraud. And not a one of them believes in science or in facts.

They have, thus far, expressed no interest in going after Trump for his ongoing conflicts of interest. The emoluments clause? Oh, that’s just some verbiage in the Constitution. (“Hey, we’re all making some money on the side, right?”) After the election, Trump doubled the price of admission to his “Winter White House,” the golf course in Florida? No concern to this Congress. His kids are making a fortune on the brand name? Of no interest to this Congress. Trump wants to save money, so he’s going to flush the National Endowment for the Arts and the National Endowment to the Humanities; at the same time, he’s on the way to spending more on weekly golf vacations than the two of them cost the entire country. No concern to this Congress.

Is any of this illegal? Maybe. Late Friday night Trump fired all the federal prosecutors who might be looking at any of this mischief, including Preet Bharara, US Attorney for the Southern District of New York. Bharara was, according to some sources, deep into an investigation of Fox News when Trump fired him. Fox News was Trump’s primary faux-news supporter during the campaign. Coincidence happens, but it is best not to go there as your first explanation.

Trump could be impeached, and if impeached by the House, he might be convicted by the Senate, but he won’t be unless, as the next Congressional elections draw nigh, some of those Republicans in lockstep sniff the possibility that they might be kicked out in spite of all the gerrymandering the past 20 years based, mostly, on ethnic lines, that has made their Republican districts safe and secure.

New York’s Chris Collins (27th Congressional District), for example, is a millionaire who bought his way into office in an almost-entirely white gerrymandered district. But the next Congressional election might not be white suburbs versus black cities. It might very well be about people who can afford to be treated for a vile disease and those who cannot.

Chris Collins has swell medical coverage not only because he is rich, but also because he is a member of Congress, and—as we all know—the best medical plan in the country is the one that covers members of Congress.

Next election, if the Republican medical plan goes through, there are going to be a lot of people in those rural Republican districts who look around and ask, “Who got fucked? Who got the tax deductions? Why won’t they cover me for an X-ray? Why can’t my kids get to see a doctor?”

A shift of only two seats will change the Senate. It will take more for the House, but the House Republicans are sticking it so viciously and cynically to their base with Trumpcare that a shift there is also possible. More subtle matters—like Trump’s obliteration of environmental protections—will take longer to sink in. But one day some of those guys fishing in Lake Erie will realize that what they just hauled into the boat is so toxic that it not only cannot be cooked and eaten, it shouldn’t even be touched.

The great danger is the White House. What will the ego-in-chief do to stay in place? Will he encourage a terrorist attack? How could we all not support a response to a terrorist attack? Which civil liberties would be lifted? Which bogus wars would be launched in response? Think of all the bogus terrors Trump has floated thus far: Mexican rapists surging across the border, refugees spilling into the country with no vetting, Obama bugging his apartment in Trump Tower. All of it bullshit.

Remember: There never were any weapons of mass destruction that threatened us in Iraq. And also remember that our war there totally destabilized that entire region, and involved us in a mess we still cannot get out of. And it got George W. Bush a second term he otherwise would not have gotten.

Do you remember George W. Bush gloating, “I am a wartime president?” Do you remember him landing on an aircraft carrier in a chopper he could not fly, in a tight-crotch jump-suit, with a sign above his head proclaiming, “Mission Accomplished?”

George W. Bush recently published a book of his paintings of wounded veterans from that war. That’s what he got out of it: a book of paintings of people with wounds that would not have been inflicted had it not been for his foolishness. What did the rest of us get out of it?

And Trump: What will he leave this mess with? Nothing in his record indicates any sense of responsibility toward others, any sense of responsibility toward others or having ruined the lives of others. When questioned about screwing other people in his business life during the campaign, he gloated that those moments showed what a good businessman he was. When challenged about his not having paid taxes, he said the same thing. And, so far as anyone knows, the only money he has ever given to charity has been other people’s money, money donated to his private foundation.

So what do we do?

If you’re on Facebook, you see postings every day saying “click here if you agree” about various parts of Trump’s villainy. Those postings and those responses are just social media jerking off. The petitions go nowhere; they mean nothing to anyone; no one cares about them. If you click on them and think you’ve done something, so you therefore don’t have to do anything more, you’ve left the game without having accomplished anything.

Unless you think the job of government is to serve the rich and powerful (Donald Trump, his family, and his friends), the most useful course of action is to work very hard on the next round of elections, both in the statehouses and Congress. The statehouses do the gerrymandering. Congress does the rest of it.

Absent violence, the ballot is our only bullet.