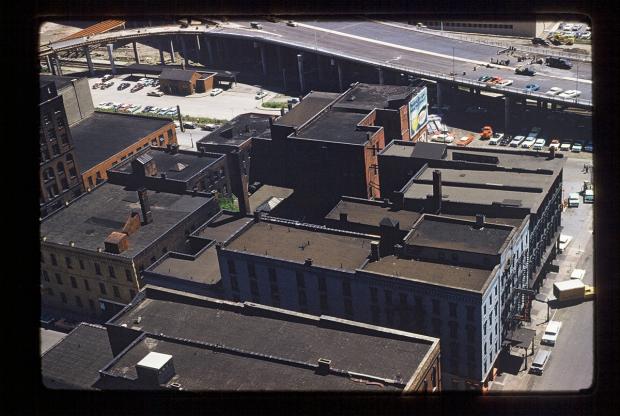 by
The Public Staff
/ Mar. 15, 2017 12am EST
Exchange Street was Buffalo’s railroad mecca prior to construction of the “new” New York Central Terminal in 1929. Prior to 1929 and dating back to 1854, factories, wholesalers, hotels, and restaurants tapped into the passenger traffic of the New York Central Terminal at Exchange and Wells streets. Exchange Street declined sharply after the terminal’s 1935 demolition. In this 1958 photograph taken by the Department of Urban Renewal, the “landfront” of tall buildings fronting the tracks along Exchange Street remain. Nine multi-story buildings occupy the block bounded by Washington, Exchange, Carroll, and Ellicott streets. The Benedict Hotel, still in operation, is at the lower right at Washington and Carroll streets. In the upper part of the image, the Niagara Thruway is under construction. Out of frame to the left, downtown’s first large-scale demolition spree, involving 50 buildings on four blocks, is underway for the Elm and Oak thruway interchanges. Except for the Exchange Street Station, every building in this photograph is gone today. The block is now occupied by the One Seneca parking ramp.